Everyone has to have a podcast, apparently. Even Facebook. The social network this week launched its second-ever original podcast series, and its first in the U.S. An arm of Facebook’s business operation, the new show “Three and a Half Degrees” will focus on entrepreneurship — specifically the lessons learned, challenges faced and other insights from successful business leaders.

The name is a reference to how technology has made it easier to connect — today, people are no longer six degrees apart, but only three and a half degrees, the company says.

“I consider it part of our mission to help the businesses we work with learn from one another,” explains David Fischer, Facebook’s VP of Business and Marketing Partnerships. “One way we’re doing this is with the new podcast ‘Three And A Half Degrees: The Power of Connection.’ Through the podcast, we hope to celebrate the journeys of entrepreneurs and business leaders on our platform, and scale their inspiring life lessons and learnings to other entrepreneurs and leaders,” he says.

Facebook today has more than 90 million businesses using its platform, so it makes sense that it wants to further establish itself as a place where established businesses can share their knowledge with newcomers. Those smaller businesses could then grow to become a more active part of Facebook’s larger business network, which keeps the cycle — and the ad dollars — flowing.

Fischer will serve as podcast host, and kicks off the first episode with an interview with the creator of TOMS,  Blake Mycoskie, who is introduced on the show to Bryan and Bradford Manning. The Mannings say they were inspired by TOMS to start their own charitable business, Two Blind Brothers. The overall focus for the episode is on brands that prioritize their social mission over profit and growth. This first season includes these seven episodes and 14 guests, with new episodes arriving every two weeks.

It’s not a long season, and Facebook hasn’t yet confirmed plans to do another, we understand. That makes the “podcast” a bit more like a marketing initiative rather than a serious attempt at entering the podcasting market.

The podcast is also not monetized. The company has no plans to sell ad space within the podcast, either. It will be marketed across Facebook and Instagram. 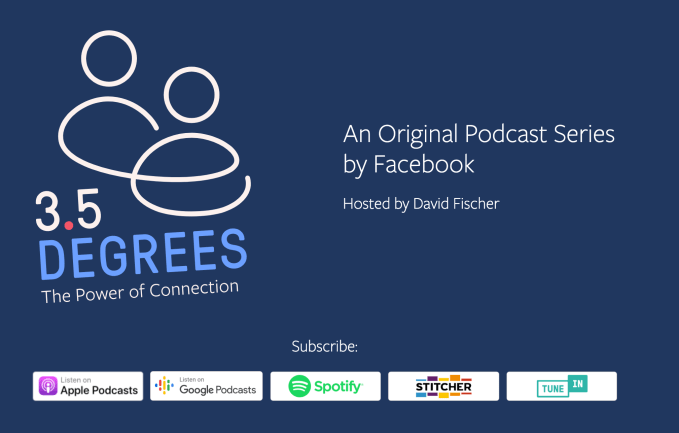 Though this is the first time Facebook has done a podcast in the U.S., it has experimented in this space previously. Last summer, it tried a similar effort in Australia, where leading marketers talked about connecting with consumers in a podcast called Face 2 Face. That one seems to have even more of a tie to Facebook’s own bottom line. (Connect with consumers? Social ads, of course!).

This one takes a step back from the nitty-gritty of reaching consumers through spending on marketing and ads, but focuses rather on the business leaders themselves.

The vibe of the podcast is one of a highly produced effort. It doesn’t begin as a sit-down, informal back-and-forth chat, but one where pre-recorded interviews are intercut with host narration and storytelling. It’s not until nearly halfway through before the introduction between Mycskie and the Mannings is made. At that point, it shifts from being a sort of NPR-Lite style effort, and one where you’re listening to a conversation — albeit one with a polished, media-trained exec like Mycskie.

Unfortunately, this more compelling part of the program is far too short, and quickly wrapped up with the host summarizing the learnings.