Facebook wants to make it easier for users to share events and coordinate with friends before an event starts. The company this morning said it will test a new feature that lets users share to their Story those events they’re interested in attending, then make plans to meet up with friends who also plan to attend.

The test will involve a new option to “Share to Your Story” that appears when you visit an event’s page on Facebook. If shared, friends will see a tappable sticker within your Story that includes the event details and lets friends respond that they’re also “interested” right from the Story itself.

Friends also can tap on the sticker in the Story to visit the event page.

In addition, the new feature will offer a list of friends who plan to attend the event, so you can easily create a group chat with those users.

While the feature is available to all in the test markets, it seems particularly targeted toward younger users. 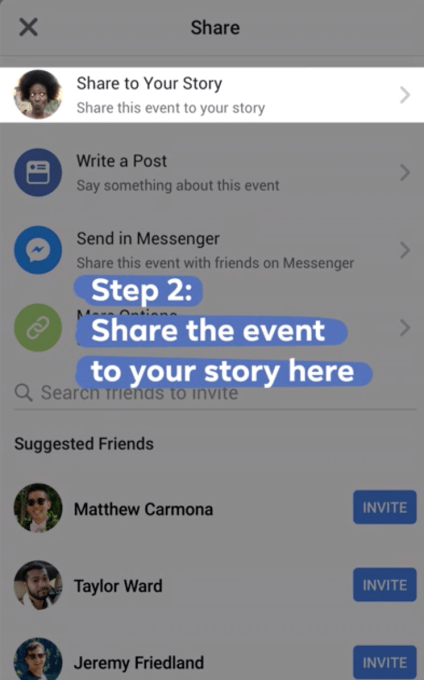 It arrives at a time when Facebook has been losing its younger users at an even faster pace than previously expected. According to a 2018 report from eMarketer, for instance, last year was the first time when less than half of U.S. internet users ages 12 to 17 would use Facebook at least once a month.

Instead, Facebook’s monthly user growth was coming from older demographics, the report said. It predicted Facebook would lose 2 million users age 24 and younger during the year.

Those users would be migrating to other social networks, including Instagram and Snapchat.

A separate report from Pew Research Center released in fall 2018 confirmed this trend, saying that 44 percent of younger users (ages 18 to 29) had deleted the Facebook app from their phone over the past year.

Meanwhile, the younger demographic has begun to organize events on Instagram, a report from The Atlantic recently noted.

Teens are creating private Instagram accounts for their events. The account will include the date and handles of the organizers, in some cases. If the account follows you, it’s your invite. If you send a follow request and are approved, you’re also invited.

Of course, Instagram wasn’t designed for events the way that Facebook is, but it can be popular because the party account can remain private and anonymous — helpful for staying under the radar of snooping parents, for instance.

With the Stories feature, the company now hopes that a different way to share and track events on Facebook itself will offer a similar ability to rally friends that appeals to younger users.

To use the new feature, you’ll go to the Events page, click “Share” below the date and time of the event, then tap “Share to Story.” Friends tap “interested” to say they may attend, and you’ll be able to see these responses. To kick off the group chat, tap on the circle next to the friends in the list.

The test is rolling out now to users in the U.S., Mexico and Brazil, Facebook says.