Californians have a lot to enjoy — great weather, big waves, solid microbreweries and of course extremely high taxes on prepaid mobile service. But this controversial last feature is being adjusted after a judge found at least part of the state’s Mobile Telephony Surcharge to be unconstitutional. As a result, bills could shrink by a couple bucks starting this month.

The tax, which funds various local services like 911 and so on, was raised in 2016 and, depending on various factors, could be around 20 percent of the bill. That turns a $50 bill into a $60 bill, which is especially rough when you consider that lower prepaid plans are often preferred by people with limited incomes. So the tax was unpopular from the start — not that many are particularly liked.

In addition to making users angry, it attracted the attention of wireless carriers: MetroPCS filed a lawsuit alleging that the way the tax was calculated conflicted with federal rules set by the FCC. The details are buried in a mound of legalese, but essentially the problem was that California was effectively taxing inter-state services as well as within-state ones, which is not allowed either by state or federal law.

The challenge took its course and although the California government argued that its tax was compliant with the FCC’s rules, the judge ultimately decided otherwise.

“The California Prepaid Mobile Telephony Services Surcharge Collection Act [i.e. the tax increase passed in 2014 and instituted in 2016], in its entirety, conflicts with federal law and therefore is preempted and unconstitutional,” she wrote in the order concluding the case. 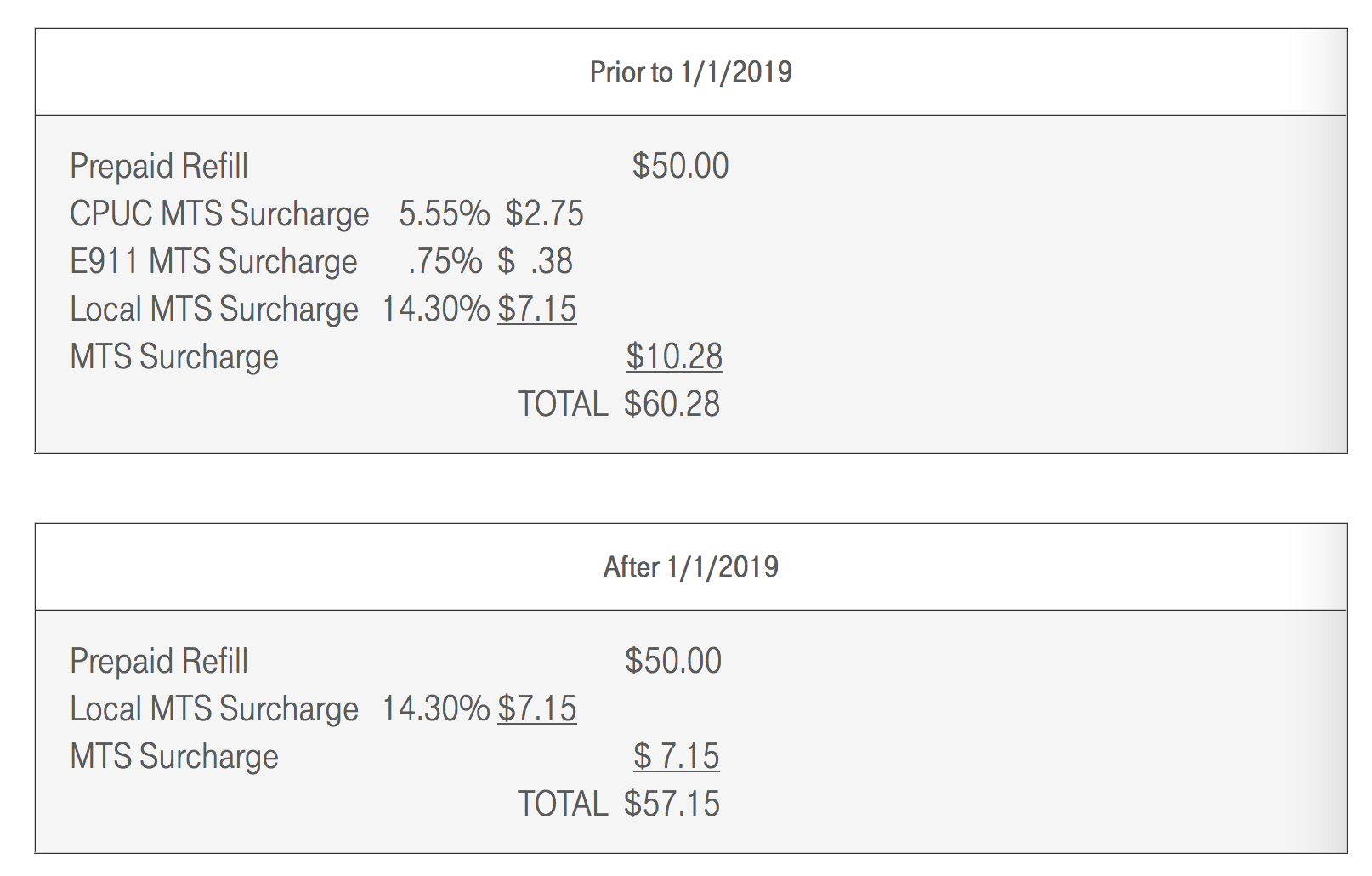 Example bills from T-Mobile show how fees could change. The amounts will differ based on region and bill total.

Although California is appealing the case, the judge’s order prevents it from collecting the tax in the meantime. So as long as that injunction remains in place, mobile bills should see a small break.

It won’t be a lot — an example provided by T-Mobile showed total taxes and fees reduced by about $3. But hey, every little bit counts.

The actual amount you pay your carrier shouldn’t change, though. Your $40 or $75 plan will remain the same; it’s only the associated taxes that are effected. The way they’re listed may also change; for instance, AT&T is replacing the “Prepaid MTS Surcharge” line item with “CA Surcharges, Fees & Taxes.” Its announcement doesn’t explicitly mention a change in amount, but unless it adds a fee of its own to make up the difference, it seems that users there and at other carriers will see similarly lowered taxes.

If you’re curious how much your bill will drop, if at all, your best bet is to call customer service and ask them to check.