If you’re tired of firing up Photoshop for lightweight image editing tasks, this little tool is good news for you. Called Remove.bg, it can clear out the background of an image in seconds, no lassoing or any other editing hassle required. Because it uses AI trained on images of people, Remove.bg only works on photos of humans for now, immediately separating subject from background and leaving your image clean and ready for whatever you plan to do with it.

While Remove.bg has attracted a bit of attention before, we noticed it this time around when Twitter user Matt Haughey tested it out on Gritty, everyone’s favorite ambiguously anthropomorphic leftist meme. And it worked! Gritty is people, too.

Holy shit https://t.co/d3HtQOLRU9 is really good what it does, check out my (not easy) demo image. This is frankly better than I could do by hand in photoshop and takes seconds instead of 10-15min pic.twitter.com/2IywRM93Xi

When we tested it, we were impressed by its ability to account for pesky, feathery hair without making an image look jagged and amateurish. Even if you’ve been using it for ages, dealing with hair can be tricky and time-consuming in Photoshop. Best to shave it off. 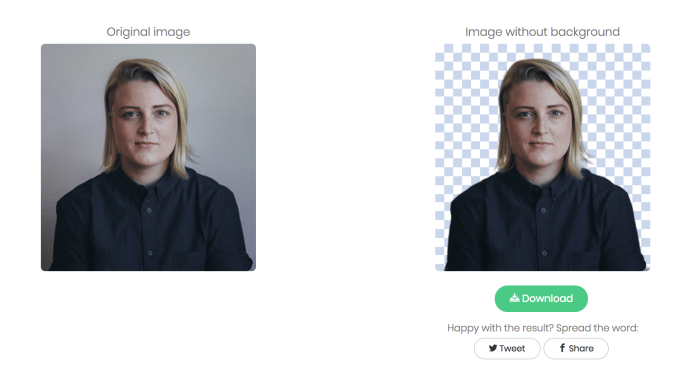 According to Remove.bg’s website, the creators were similarly fed up with the time and resource-intensive process of leveraging powerful image-editing software for trivial editing tasks:

Initially we had plans to build an app that uses the generated transparent images as the basis for something else. Given the promising results we thought: Why not release the background removal algorithm as-is, as a tool for the many designers, photographers, artists and other people who regularly need to remove backgrounds from images? So that’s what we did.

Since the release of remove.bg we have received a lot of great feedback and we are currently making plans for the future of the tool. We don’t have definite announcements about this yet, the only thing that’s clear is: We want to keep offering the current service free of charge on a permanent basis.

On the About page, its creators also reassure users that they aren’t training AI on images edited with the tool. That’s it, no catch, it just works. We need more things that just work.