Amazon this morning said its Alexa devices were among the holiday season’s best-sellers, particularly the Echo and Echo Dot. But the influx of new users setting up their devices for the first time on Christmas Day appeared to be more than Alexa could handle. The service crashed briefly on Christmas, as thousands of new Alexa device owners tried to connect their Echo to Amazon’s servers around the same time.

The Guardian first reported the Alexa outage, which began around 10 AM GMT and led existing Echo owners to complain they were unable to use their devices for regular tasks like playing music or smart home controls, for example.

Others said they were unable to set up their device, despite not having any other internet or home Wi-Fi issues, which seemed to point to a server-side outage.

Amazon’s Twitter account noted the issues were isolated to Europe, saying at 8:43 AM EST (1:43 PM GMT): “Over the past two hours some Echo devices in Europe have had intermittent connections.” The outage was resolved by the time the account had responded, meaning it had only lasted a couple of hours.

An Amazon spokesperson also confirmed the outage to TechCrunch.

“For a short period yesterday morning we had an issue that intermittently impacted some Alexa customers’ ability to interact with the service,” the spokesperson said. “The Alexa service is now operating normally.”

Hey there. Over the past two hours some Echo devices in Europe have had intermittent connections. These issues have now been resolved and the Alexa Service is working normally. ^RY

I'm sorry for the trouble! Some Echo devices in Europe had intermittent connections. These issues have now been resolved and the Alexa Service is working normally. Please let us know if it's still giving you trouble. ^BH

Amazon declined to offer details on what caused the outage, or explain how it was resolved. Likely, it was related to the increased number of requests. The Alexa app shot to the top of the App Store and Google Play on Christmas — another signal that points to a large number of first-time Echo owners setting up new devices on the holiday.

The website Down Detector also spotted troubles with Alexa that impacted Europe, with a peak of 2,183 reports coming in at the height of the outage. The reports then tapered off a couple of hours later. 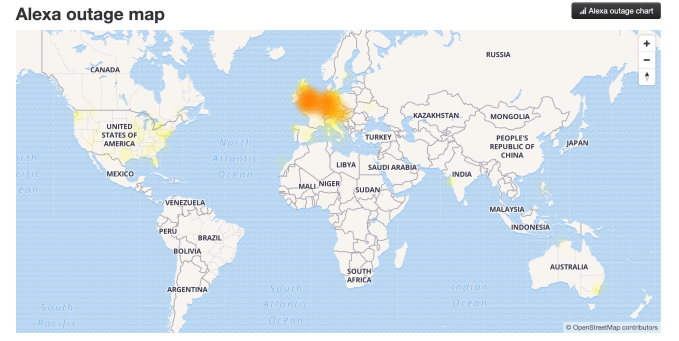 This isn’t Alexa’s first outage by any means, nor even its first this year. The service can become unresponsive at times, either due to server issues or overloads. In March, for example, the voice service went down even while the Alexa mobile app still worked.

And in September, Alexa went down across Europe, apparently related to an AWS outage in Ireland. That was followed by a U.S. outage the following month, which led the assistant to respond to requests with “sorry, something went wrong.”

Europe is a growing market for Alexa, with Amazon having introduced its smart speaker to Italy and Spain this June. Alexa’s other international markets include the U.K., Australia, India, New Zealand, Germany, Japan and Ireland.