Twitter and Facebook announced this morning they’ve removed a combined total of 30 accounts that were working to spread misinformation in Bangladesh, 10 days before the country’s general elections. According to Facebook, the company removed nine Facebook Pages and six Facebook accounts that were engaging in “coordinated inauthentic behavior.” Twitter said it removed 15 accounts that were doing the same. Both companies said the accounts had government ties.

“Working with our industry peers we identified and suspended a very small number of accounts originating from Bangladesh for engaging in coordinated platform manipulation,” Twitter explained in a tweet. “Based on our initial analysis, it appears that some of these accounts may have ties to state-sponsored actors,” it said.

Facebook, in a blog post, said it was first alerted to the fake news posts, in part, based on a tip from Graphika, a threat intelligence company it works with. The Facebook Pages in question were designed to look like news outlets, and had posted pro-government and anti-opposition content.

The company also confirmed that the activity was linked to individuals associated with the Bangladesh government.

In some example images Facebook shared, you can see the Pages had been designed to look like BBC’s Bangla news service and the online news site bdnews24.com, among others. 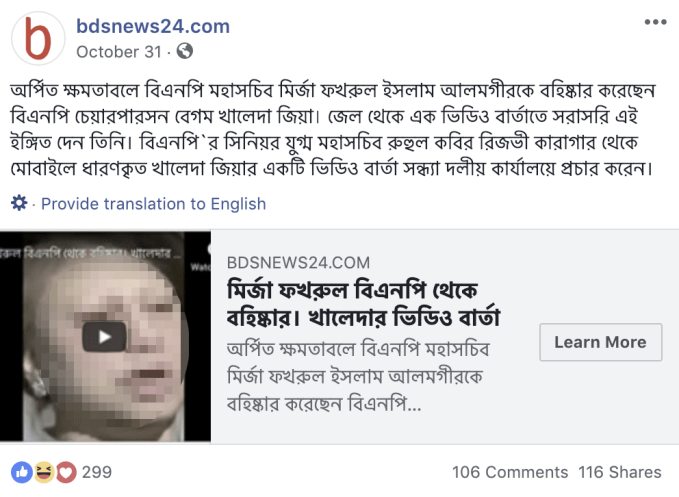 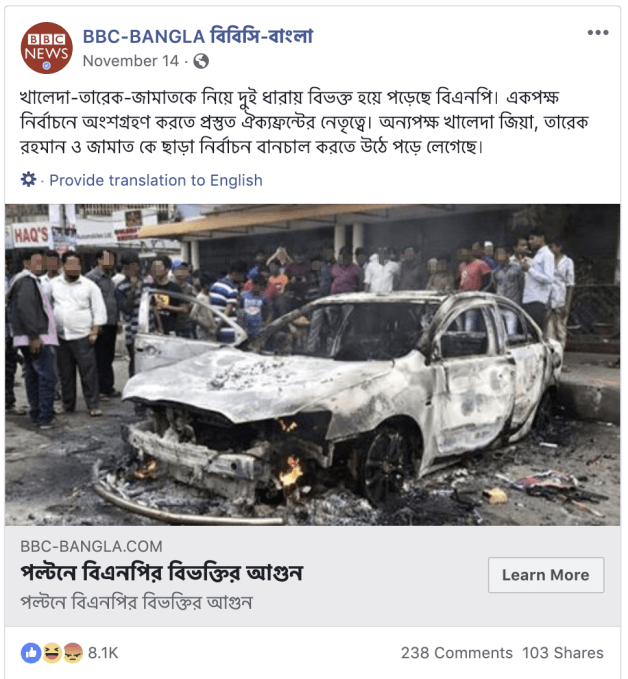 In its own reporting, bdnews24 noted the fake news Page had used an almost identical logo, except that it added an extra letter in the URL and the logo.

Facebook didn’t say how many total followers these Pages and accounts had, but claimed one of the Pages had around 11,900 people tracking its updates. The network of accounts and Pages had spent around US$800 on Facebook ads, beginning in July 2017 and continuing through last month.

“We are continuously working to uncover this kind of abuse,” wrote Facebook’s head of Cybersecurity Policy, Nathaniel Gleicher. “Today’s announcement of the removal of these Pages is just one of the many steps we have taken to prevent bad actors from misrepresenting themselves to manipulate civic discourse. We will continue to invest heavily in safety and security in order to keep bad actors off of our platform and provide a place for people to connect meaningfully about the things that matter to them,” he said.

Twitter, meanwhile, said its investigations are still ongoing and its enforcement actions may expand later on.

For now, however, it has taken action on a total of 15 accounts, all of which had a very small number of followers. Most of the accounts had fewer than 50 followers, it noted. Twitter said it will release more information about the accounts when the investigation completes, as it has before.

Those accounts had a relatively low number of followers, with most having fewer than 50. As we have in the past, we will publicly release information about these accounts when we complete our investigation. More details here: https://t.co/tjD9bWvCKx