Fitness and gaming have been two of the most popular categories of apps for years, and now a startup founded out of London that has combined the two in a unique way has picked up a big round of funding to capitalise on that. Zwift, an interactive platform for people to turn indoor cycling workouts into massive, multi-participant races, social rides, and immersive explorations of new domains, has raised $120 million — money that its co-founder and CEO, Eric Min, said will be used to expand to more training categories (its first steps outside of cycling have been into running), and to add esports tournaments.

The funding — led by Highland Europe, with Europe’s True (not to be confused with True Ventures), Causeway Media and Novator participating — comes on the heels of very rapid growth for Zwift.

The startup now has over 1 million registered accounts (it doesn’t disclose active users), up from a mere 200,000 two years ago, with users ranging from amateur cycling enthusiasts, people who cycle as part of fitness regimes, and professional athletes who use it to supplement IRL global training schedules.

“More than one-third of the peloton in this year’s Tour de France” — despite all its controversies, still the gold standard for road races — “are users of Zwift,” Min told me. There are 200 Facebook groups built around Zwift communities, with people using them to organise rides and sometimes even to meet up in person afterwards at cafes, just as they might in actual outdoor rides. With customers in 100 countries, Min told me that there are on average 300 organised (group) rides a day happening on Zwift.

The company isn’t disclosing its valuation, but Min said that the startup is “approaching unicorn status” on account of its growth and big ambitions and it appears to be more than $500 million with “a very small dilution” — a big jump on the $180 million Pitchbook estimated its valuation to be in 2016 (it’s raised around $166 million to date).

Min believes that the upswing in e-sports could see the format getting ever-more mainstream acceptance. “Our goal is to bring Zwift to the Olympics,” he told me confidently.

Zwift is swiftly addressing two different shortcomings of two common home pastimes. One of the problems with exercising at home — and specifically training in cycling as a first effort — is that it might get a little boring, and one of the problems with playing too many video games is that they contribute to the tendency we have in our modern world to be too sedentary.

The service involves you providing your own bike, which you link up with a Zwift trainer (a rack-like piece of equipment that turns a bike into a stationary bike for indoor training), which in turn picks up your stats and adjusts tension and so on based on the course that you are riding. You cycle in front of a TV typically to get the immersive effect, linked up to a Mac, Windows or iOS App (it’s also on Apple TV). You start with a free trial before moving to a monthly fee of $15 (or $10 if you are currently on a trial or already subscribe: the higher fee was introduced last month).

There are no plans at the moment for VR headsets or other head-based wearables because so far they have proven to be too bulky to be usable in the physical environment of sometimes-gruelling cycling, Min said. And for now, you also don’t use spinners or other stationary cycling apparatuses because these can’t provide the right kind of ‘real-world’ riding feel, he said. But this might evolve as Zwift partners with more third parties (and with companies like Peloton a big hit with home fitness enthusiasts, you can see how that might evolve).

In all of its sports and sport ambitions, Zwift is bringing not just basic tension and gaming dynamics to the table: it’s using some interesting algorithms to help train its users, and figure out what might be the best logical step for them in terms of increasing or decreasing difficulty while measuring all other cycling stats. Min says this all starts with getting an accurate weight for each user.

Cycling accounts for 98 percent of the company’s business at the moment, and running is just taking off. For runners, people use running treadmills, and that is the template the company wants to follow, eventually including rowing machines, step machines, and more. Sometimes the locations are actual places like Innsbruck, pictured above. Sometimes they are make-believe terrains, like the fictional Pacific Island Watopia, below: 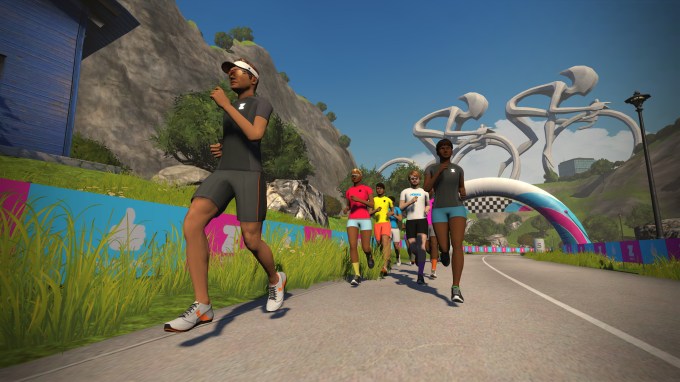 Min tells me he started Zwift out of London because that is where he lives, but much of the development has come out of southern California, since that is where there is a stronghold of gaming developers. Min himself is an expat from America (there are a lot of us here!), New York specifically, who previously had been a VP at JP Morgan and then founded a fintech company called Sakkonet Technology that’s still going strong, and he happens to be a cycling enthusiast going back to childhood.

“I wanted to do something different from fintech and the idea for Zwift was staring right at me,” he said. “I was a cyclist since I was a kid, painfully so. The worst thing you could do is ride your bike indoors because it was so boring. I used all the products I could but it wasn’t engaging enough, so we thought, what about taking the tech that out there for gaming, combining that with what you do in cycle training, and bring all that to a digital platform? Even if you could get 80 percent of the experience, that would be better than what was offered in the past.”

Highland and the other investors are all strategic, in that they are already investing quite a bit in other fitness enterprises, which could in turn point to partnerships down the road. Highland’s in eGym and Huel; True backs the Ribble cycling brand; and Causeway invests in traditional sports and esports.

“Zwift is a fantastically innovative company and they are certainly leading the way in the indoor training space,” says Tony Zappala, Partner of Highland Europe in a statement. “It’s a highly scalable business and we’ve been impressed with how they have already managed to expand globally – already 70 percent of current subscribers are from outside the USA. Research points to an audience of 40 million competitive and enthusiast cyclists, and many of those lie in the traditional cycling nations of Central Europe, so in this market alone there is huge growth potential.”

With numbers like that, even without widening the company’s remit, there is a large opportunity to build a specialist fitness/gaming business here, but from what Min says it sounds like this is just phase one of his strategy.

Eschewing any comments about acquisitions when I brought up the topic in our conversation (“No acquisitions,” was his answer on that subject), he said that Zwift for now doesn’t have any formal commercial partnerships team in place.

Even without that, there are about 50 gyms that are already building programs for their customers around Zwift rides, so you can see how this might develop if it did put more focus on partnerships with gyms, offices, co-working spaces or hotels in the future. “We want to build a business that will last decades, or more,” he said.