M&A activity was brisk in the enterprise market this year, with 10 high-profile deals totaling almost $88 billion. Companies were opening up their wallets and pouring money into mega acquisitions. It’s worth noting that the $88 billion figure doesn’t include Dell paying investors more than $23 billion for VMware tracking stock to take the company public again or several other deals of over a billion dollars that didn’t make our list.

Last year’s big deals included Intel buying MobileEye for $15 billion and Cisco getting AppDynamics for $3.7 billion, but there were not as many big ones. Adobe, which made two large acquisitions this year, was mostly quiet last year, only making a minor purchase. Salesforce too was mostly quiet in 2017, only buying a digital creative agency, after an active 2016. SAP also made only one purchase in 2017, paying $350 million for Gigya. Microsoft was active buying nine companies, but these were primarily minor. Perhaps everyone was saving their pennies for 2018.

This year, by contrast, was go big or go home, and we saw action across the board from the usual suspects. Large companies looking to change their fortunes or grow their markets went shopping and came home with some expensive trinkets for their collections. Some of the deals are still waiting to pass regulatory hurdles and won’t be closing until 2019. Regardless, it’s too soon to judge whether these big-bucks ventures will pay the dividends that their buyers hope, or if they end up being M&A dust in the wind. 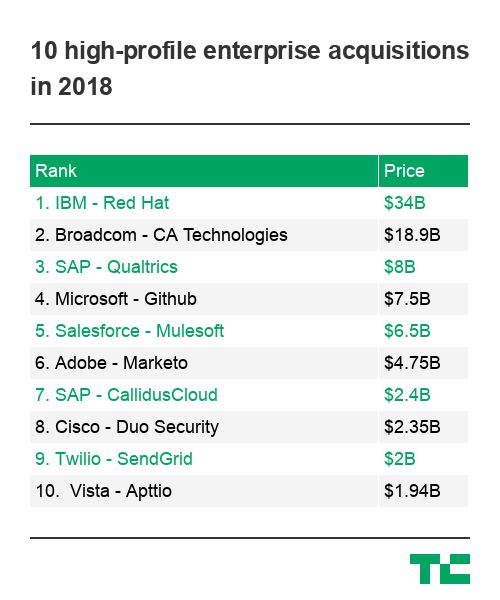 By far the biggest and splashiest deal of the year goes to IBM, which bet the farm to acquire Red Hat for a staggering $34 billion. IBM sees this acquisition as a way to build out its hybrid cloud business. It’s a huge bet and one that could determine the success of Big Blue as an organization in the coming years.

This deal was unexpected, as Broadcom, a chip maker, spent the second largest amount of money in a year of big spending. What Broadcom got for its many billions was an old-school IT management and software solutions provider. Perhaps Broadcom felt it needed to branch out beyond pure chip making, and CA offered a way to do it, albeit a rather expensive one.

While not anywhere close to the money IBM or Broadcom spent, SAP went out and nabbed Qualtrics last month just before the company was about to IPO, still paying a healthy $8 billion. The company believes that the new company could help build a bridge between SAP operational data inside its back-end ERP systems and Qualtrics customer data on the front end. Time will tell if they are right.

Microsoft gets GitHub for $7.5 billion

In June, Microsoft swooped in and bought GitHub, giving it a key developer code repository. It was a lot of money to pay, and Diane Greene expressed regret that Google hadn’t been able to get it. That’s because cloud companies are working hard to win developer hearts and minds. Microsoft has a chance to push GitHub users toward its products, but it has to tread carefully because they will balk if Microsoft goes too far.

Salesforce wasn’t about to be left out of the party in 2018 and in March, the CRM giant announced it was buying API integration vendor Mulesoft for a cool $6.5 billion. It was a big deal for Salesforce, which tends to be acquisitive, but typically on smaller deals. This one was a key purchase though because it gives the company the ability to access data wherever it lives, on premises or in the cloud, and that could be key for them moving forward.

Adobe has built a strong company primarily on the strength of its Creative Cloud, but it has been trying to generate more revenue on the marketing side of the business. To that end, it acquired Marketo for $4.75 billion and immediately boosted its marketing business, especially when combined with the $1.68 billion Magento purchase earlier in the year.

SAP doesn’t do as many acquisitions as some of its fellow large tech companies mentioned here, but this year it did two. Not only did it buy Qualtrics for $8 billion, it also grabbed CallidusCloud for $2.4 billion. SAP is best known for managing back-office components with its ERP software, but this adds a cloud-based, front-office sales process piece to the mix.

Cisco has been hard at work buying up a variety of software services over the years, and this year it added to its security portfolio when it acquired Duo Security for $2.35 billion. The Michigan-based company helps companies secure applications using their own mobile devices and could be a key part of the Cisco security strategy moving forward.

Twilio got into the act this year too. While not in the same league as the other large tech companies on this list, it saw a piece it felt would enhance its product set and it was willing to spend big to get it. Twilio, which made its name as a communications API company, saw a kindred spirit in SendGrid, spending $2 billion to get the API-based email service.

Vista Equity Partners is the only private equity firm on the list, but it’s one with an appetite for enterprise technology. With Apttio, it gets a company that can help companies understand their cloud assets alongside their on-prem ones. The company had been public before Vista bought it for $1.94 billion last month.