Batteries. Clothing. Household goods. Supplements. Diapers. Furniture. Toys? Yes, toys. It seems Amazon’s private label business is preparing to enter the toy market next. The retailer’s initial toy listings include an indoor play set for toddlers, along with other toys for climbing and playing on, as well as a toy storage system.

The listings were first spotted by TJI Research this week, but the items themselves are not available for sale. (The listings have also been pulled down, following our inquiry to Amazon.)

We were able to confirm that the products will be added to the AmazonBasics line in the future and they’re aimed at daycares more so than consumers.

AmazonBasics is Amazon’s flagship private label brand, where consumers can shop for Amazon’s version of everyday needs like cables, batteries and other home necessities, such as bed sheets, bath towels, knife sets, tools and more, plus office products, sports and travel accessories, pet supplies and many other things. Basically, it’s Amazon’s attempt at owning a piece of the market for every top-selling item and category on its site.

As for the new toys, they’re not exactly Amazon’s attempt to take on Mattel or LEGO, but rather are meant to cater toward childcare business owners, we understand. That is to say, these are not dolls and playthings — they’re classroom needs.

A tunnel for toddlers to climb through or soft foamy shapes for the kids to climb up and over, for example. 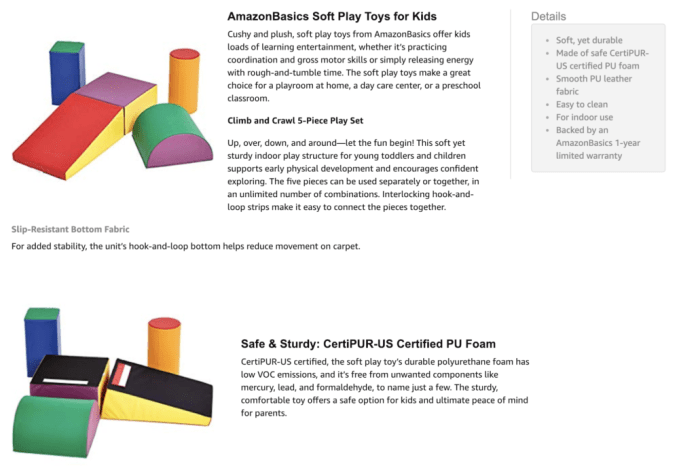 These aren’t the only AmazonBasics supplies geared toward early-education classrooms, like daycares and preschools. The retailer already today sells things like small lockers and bookshelves that are also targeted toward the same business customer base.

Still, it is notable that this is the first time Amazon has produced its own toys.

The new additions are arriving at a time when Amazon has been looking to increase its presence in the toy market. This year, it mailed out to consumers its first printed holiday toy catalog. It also reported selling more than 18 million toys on Black Friday and Cyber Monday, TJI Research noted.

Today, many children’s toys rely on the power of their brand to sell, and their YouTube unboxing videos, too. But Amazon could easily compete on classic toys and staples, if it chose — things like stacking rings or wooden blocks for baby, little wagons, toy cars, easels, wooden puzzles and more. Newer brands like Melissa & Doug have proven there’s a market for classic toys like this, even in a day and age when kids are drawn to digital playthings like tablets and video games.

However, Amazon hasn’t made any moves yet into the broader toy space — and it may not do so, given the potential for alienating toy makers whose brands it needs to list and sell.

Given the launch of the toy listings pages, TJI Research estimates the toys will begin to ship in the days or weeks ahead.

(Featured image is not an AmazonBasics play set, as the listing was pulled down. It’s a similar product from Walmart’s Hayneedle.)