Coinbase is the most conservative exchange in cryptoland, largely because it operates in the U.S. under the watchful eye of the SEC. The $8 billion-valued company trades fewer than 10 cryptocurrencies to consumers, but on Friday announced a major expansion that could see it list up to 30 new tokens.

The company said it is considering support for Ripple’s XRP, EOS — the Ethereum challenger that held a year-long ICO that raised $4 billion — Stellar, a creation from a Ripple co-founder, chat app Kik’s Kin token and more.

The company last announced new asset explorations in July, although today it did add four new ERC tokens to its pro service.

Coinbase recently revamped its policy on new token listings. Instead of abruptly adding new assets, a process that sent their valuations spiking along with rumors of inside trading, it now goes public with its intention to “explore” the potential to list new assets in order to lower the impact of a listing. It also doesn’t guarantee which, if any, will make it through and be listed.

“Adding new assets requires significant exploratory work from both a technical and compliance standpoint, and we cannot guarantee that all the assets we are evaluating will ultimately be listed for trading,” the company said.

The company may also introduce some tokens on a state by state basis in the U.S. in order to comply with laws. 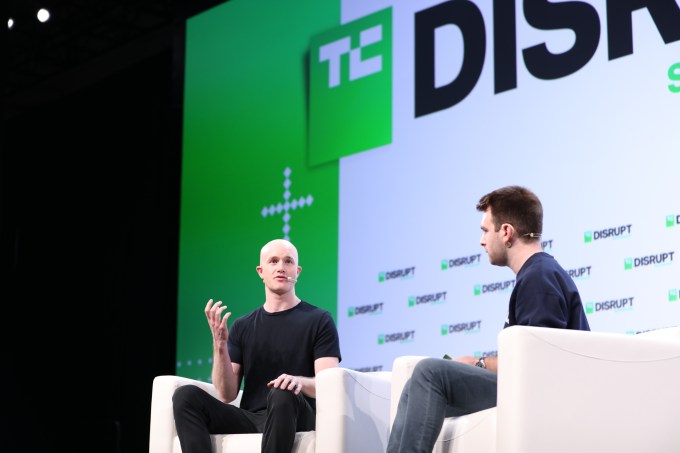 Brian Armstrong told the audience at Disrupt San Francisco that Coinbase could list “millions” of cryptocurrencies in the futureCoinbase is looking into this glut of new tokens — some of which, it must be said, are fairly questionable as projects let alone operating with uncertain legal status — at a time when the market is down significantly from its peak in January, both in terms of trading volume and market valuations.

In recent weeks, sources at a number of top exchanges have told TechCrunch that trading-related revenues are down as much as 50 percent over recent months and, while the numbers for Coinbase aren’t clear, there’s no doubt that its revenue is taking a big hit during this “crypto winter.” That makes it easy to argue that Coinbase is widening its selection to increase potential volumes and, in turn, its revenue — particularly since it just raised $300 million from investors at a massive $8 billion valuation.

Coinbase defenders, however, will argue that a greater selection has long been the plan.

Ignoring the reasons, that’s certainly true. It is well known that the company wants to massively increase the number of cryptocurrencies that it supports.

CEO Brian Armstrong said as much at our TechCrunch Disrupt event in San Francisco in September, where he sketched out the company’s plan to be the New York Stock Exchange of crypto.

“It makes sense that any company out there who has a cap table… should have their own token. Every open source project, every charity, potentially every fund or these new types of decentralized organizations [and] apps, they’re all going to have their own tokens. We want to be the bridge all over the world where people come and they take fiat currency and they can get it into these different cryptocurrencies,” he said during an on-stage interview at the event.

That tokenized future could see Coinbase host hundreds of tokens within “years” — and even potentially “millions” in the future, according to Armstrong.

The company has done a lot of the groundwork to make that happen.

Coinbase bought a securities dealer earlier this year and it has taken regulatory strides to list tokenized securities in the U.S, albeit with some confusion. In addition, its VC arm has backed a startup that helps create “digital security tokens” and the exchange introduced a new listing process that could potentially include a listing fee in exchange for necessary legal work.

These 30 new (potential) assets might not be the digital security tokens that Coinbase is moving to add, but the fact that the exchange is exploring so many new assets in one go shows how much wider the company’s vision is now.

The crypto community has already reacted strongly to this deluge of new assets. As you might expect, it is a mix of naive optimism from those invested in “under-performing” projects (shitcoins) who think a Coinbase listing could turn everything around, and criticism from crypto watchers who voiced concern that Coinbase is throwing its prestige and support behind less-than-deserving cryptocurrencies.

I already helped with the rebranding strategy.
The logo is for free, feel free to use it.
Please also delist Bitcoin, thanks. pic.twitter.com/GubHTYIU8F

Coinbase went from the most conservative company in crypto to YOLO in like 6 months https://t.co/ndwF5wtb4t

Coinbase adding XRP or any other DA isn’t big news anymore. Every major financial institutions is tripping over themselves to get involved with an exchange.

Coinbase is welcome to add anything they want but they are now simply playing catch up.

I hope Coinbase realizes that several months after raising a $100M ICO, the Kik founder called blockchain ”unconvincing”. Yet their coin is still on the shortlist…

Bonus points for anyone who can count how many of these have active class action lawsuits against them?

Coinbase shitcoins OK for millions of retail investors. Bitcoin ETF for institutional investors too crazy. What f*ing parallel universe is this? 🤦‍♂️🤯