India’s troubled music streaming startup Dhingana, which announced it’s shutting down in February this year, is being acquired by Rdio. While Rdio will gain from Dhingana’s existing catalog of over 1 million songs in 42 languages through this acquisition, the latter will find a new home and hope for some of its staff who were facing an uncertain future until this week.

The companies are not disclosing financial details of this transaction.

Rdio will launch later this year in India, adding more muscle to its global expansion that started last year. Dhingana founders Snehal Shinde and Swapnil Shinde will join the executive team at Rdio, where they will work to continue Rdio’s expansion efforts in India as well as other emerging markets.

“India is a tremendously vibrant market for music and culture and one of the largest and most important in the world.  We are one of very few global companies that can provide a great music experience to an expanding international audience,” said Anthony Bay, Rdio’s CEO. “It is our objective to bring that experience to India and to non-resident Indians and fans around the world.”

Dhingana is among the top-funded music startups in India. It raised $7 million in Series B funding in October last year from Lightspeed Venture Partners, Inventus Capital Partners and Helion Venture Partners.

“Dhingana, with over 1-million songs in 42 languages and Indian genres has become synonymous with India’s love of music for its millions of users around the world. We are excited to bring a new experience for millions of Dhingana’s loyal fans, to extend that to all Indian smartphone users, and join an amazing globally-minded team at Rdio,” said Swapnil Shinde, Co-Founder of Dhingana.

“The Dhingana team has built the leading mobile-first music offering for India, and we are happy to see them join forces with another innovative company to reach an expanded global audience,” John Dougery, Managing Director of Inventus said in a statement. 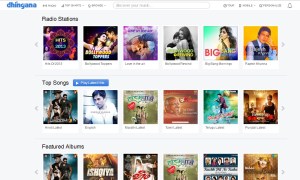 While Dhingana’s prospects would look more promising after getting acquired by Rdio, the challenges in the music streaming industry are not going to go away anytime soon.

There are some big challenges facing both the free streaming and the pay-for-download models in India — music piracy is clearly the toughest to battle, with most consumers still preferring to download free music from illegal sites like Songs.pk. The other challenge is that most big music labels demand stiff fees for awarding any digital music rights apart from the per-stream cost for each of the songs.

Dhingana started facing a crisis when its biggest partner — T Series — said it will not renew the agreement. T-Series president Neeraj Kalyan had confirmed to TechCrunch, that the company will not renew the license set to expire for nearly 8,000 songs from Dhingana’s catalogue.

We have reached out to Rdio with questions on strategy and future plans. We will update this story after hearing back from them.