Much of the last couple of decades of innovation has centered around finding ways to get what we want without leaving the sofa.

So far, online ordering and on-demand delivery have allowed us to largely accomplish this goal. Just point, click and wait. But there’s one catch: Delivery people. We can never all lie around ordering pizzas if someone still has to deliver them.

Enter robots. In tech-futurist circles, it’s pretty commonplace to hear predictions about how some medley of autonomous vehicles and AI-enabled bots will take over doorstep deliveries in the coming years. They’ll bring us takeout, drop off our packages and displace lots of humans who currently make a living doing these things.

If this vision does become reality, there’s a strong chance it’ll largely be due to a handful of early-stage startups currently working to roboticize last-mile delivery. Below, we take a look at who they are, what they’re doing, who’s backing them and where they’re setting up shop.

Crunchbase data unearthed at least eight companies in the robot delivery space with headquarters or operations in North America that have secured seed or early-stage funding in the past couple of years.

They range from heavily funded startups to lean seed-stage operations. Silicon Valley-based Nuro, an autonomous delivery startup founded by former engineers at Alphabet’s Waymo, is the most heavily funded, having raised $92 million to date. Others have raised a few million.

In the chart below, we look at key players, ranked by funding to date, along with their locations and key investors. 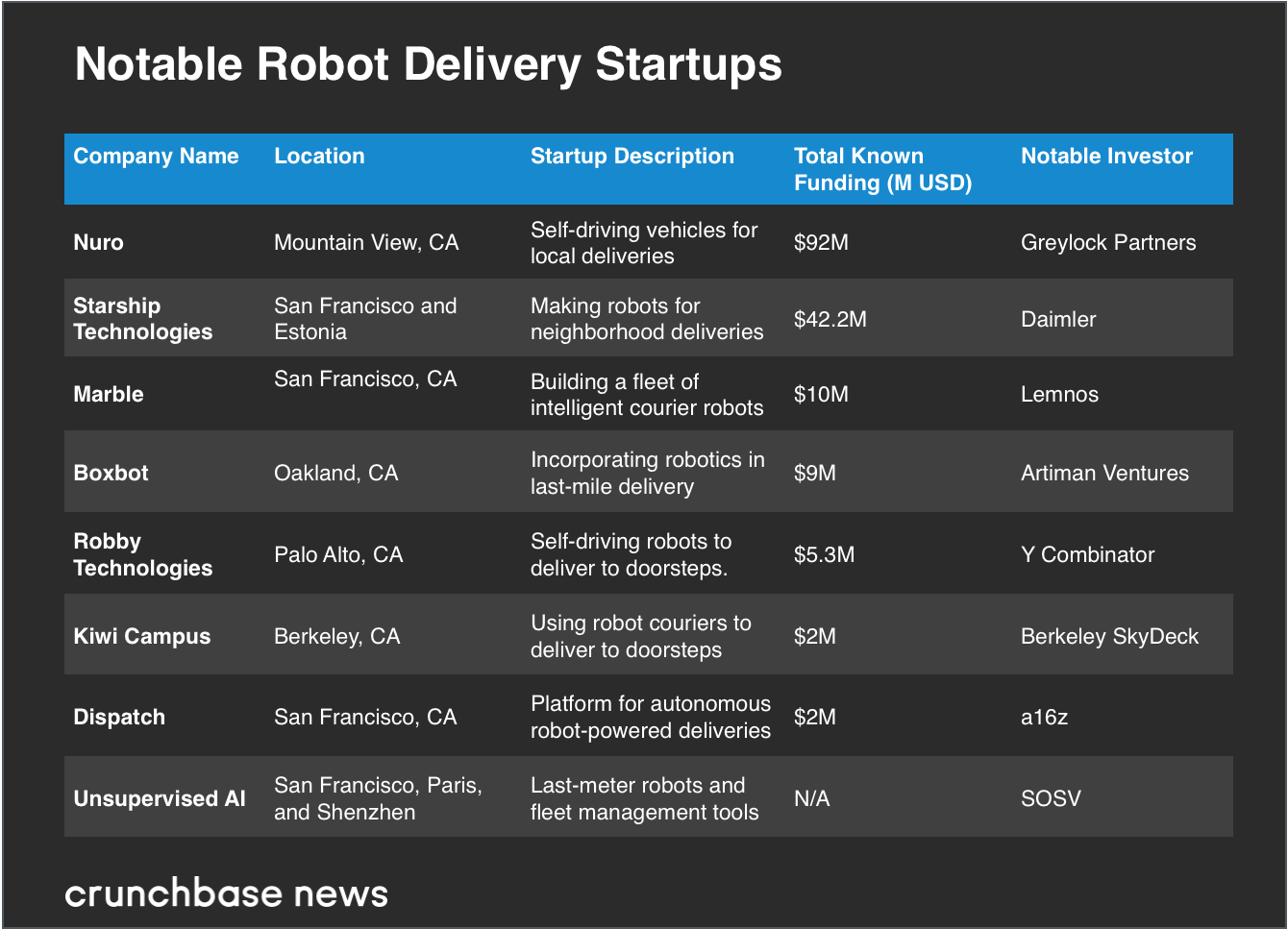 While startups may be paving the way for robot delivery, they’re not doing so alone. One of the ways larger enterprises are keeping a toehold in the space is through backing and partnering with early-stage startups. They’re joining a long list of prominent seed and venture investors also eagerly eyeing the sector.

As for partnering, takeout food delivery services seem to be the most active users of robot couriers.

Starship, whose bot has been described as a slow-moving, medium-sized cooler on six wheels, is making particularly strong inroads in takeout. The San Francisco- and Estonia-based company, launched by Skype founders Janus Friis and Ahti Heinla, is teaming up with DoorDash and Postmates in parts of California and Washington, DC. It’s also working with the Domino’s pizza chain in Germany and the Netherlands.

Robby Technologies, another maker of cute, six-wheeled bots, has also been partnering with Postmates in parts of Los Angeles. And Marble, which is branding its boxy bots as “your friendly neighborhood robot,” teamed up last year for a trial with Yelp in San Francisco.

While their visions of world domination are necessarily global, the robot delivery talent pool remains rather local.

Six of the eight seed- and early-stage startups tracked by Crunchbase are based in the San Francisco Bay Area, and the remaining two have some operations in the region.

Why is this? Partly, there’s a concentration of talent in the area, with key engineering staff coming from larger local companies like Uber, Tesla and Waymo. Plus, of course, there’s a ready supply of investor capital, which bot startups presumably will need as they scale.

Silicon Valley and San Francisco, known for scarce and astronomically expensive housing, are also geographies in which employers struggle to find people to deliver stuff at prevailing wages to the hordes of tech workers toiling at projects like designing robots to replace them.

That said, the region isn’t entirely friendly territory for slow-moving sidewalk robots. In San Francisco, already home to absurdly steep streets and sidewalks crowded with humans and discarded scooters, city legislators voted to ban delivery robots from most places and severely restrict them in areas where permitted.

The rise of the pizza delivery robot manager

But while San Francisco may be wary of a delivery robot invasion, other geographies, including nearby Berkeley, Calif., where startup Kiwi Campus operates, have been more welcoming.

In the process, they’re creating an interesting new set of robot overseer jobs that could shed some light on the future of last-mile delivery employment.

For some startups in early trial mode, robot wrangling jobs involve shadowing bots and making sure they carry out their assigned duties without travails.

Remote robot management is also a thing and will likely see the sharpest growth. Starship, for instance, relies on operators in Estonia to track and manage bots as they make their deliveries in faraway countries.

For now, it’s too early to tell whether monitoring and controlling hordes of delivery bots will provide better pay and working conditions than old-fashioned human delivery jobs.

At least, however, much of it could theoretically be done while lying on the sofa.