With the rise of streaming services and the trend toward cord cutting, the way U.S. consumers are watching video is also changing. Today, more than two-thirds of U.S. homes have devices that are able to stream video, according to Nielsen. In a new report out this morning, the measurement firm looked at the impact these services are having on the “connected living room” experience, noting also that Americans are now streaming nearly 8 billion hours per month on connected TV devices like Roku, Apple TV and Amazon Fire TV.

What’s more is that consumers ages 13 to 34 will spend twice the time streaming when watching on connected TV devices, compared with watching on the computer or mobile devices.

Specifically, Nielsen says that consumers 13 and older were streaming an average of more than an hour per day, versus 36 minutes on the computer and 24 minutes on mobile devices, like smartphones and tablets. 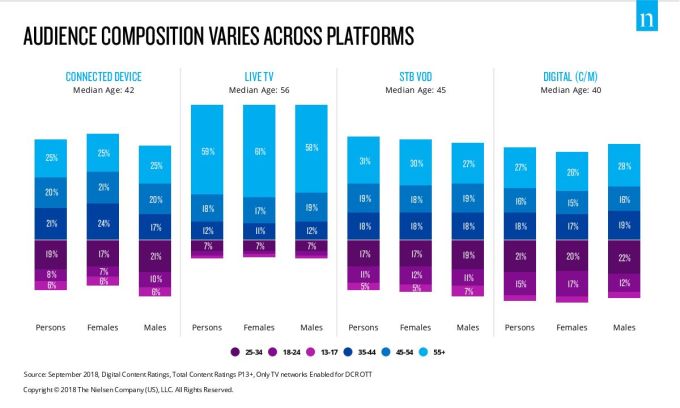 The firm also noted there’s an opportunity for live TV networks to better reach a younger demographic by making more of their video content available through connected TV devices.

Today, only 3 percent of live TV viewers across the top 5 TV networks are between the ages of 18 and 24 — an implication that the youngest consumers have turned away from traditional TV viewing.

Meanwhile, 8 percent of that demographic watches content through a connected device.

“This is a major opportunity for TV publishers to amplify their content that premiered on live TV and maximize their reach by extending the programming to be seen on connected devices,” Nielsen explained.