Thirty European tech CEOs of big startups signed a letter about stock options in Europe. Other tech CEOs can join the group and sign the letter before it is sent to policymakers on January 7.

As you can read in the letter below, these CEOs think Silicon Valley isn’t the only region suffering from talent crunch. It could be a “serious bottleneck to growth.”

“Over the next twelve months, Europe’s startups will need to hire more than 100,000 employees,” the letter says. “Without delay, we call on legislators to fix the patchy, inconsistent and often punitive rules that govern employee ownership—the practice of giving staff options to acquire a slice of the company they’re working for.”

Not Optional: Europe must attract more talent to startups

This following letter will be sent to Europe’s policymakers on 7 January 2019.

Policymakers, entrepreneurs and investors must work together to bring more talent to Europe’s startups. Here’s why.

The European tech sector has never been stronger. From London to Lisbon, Paris to Prague, Europe is now nurturing some of the world’s most dynamic and creative companies. And not all are fledgling young startups: many are already substantial, high-growth enterprises set to succeed in the global market.

The days of living in Silicon Valley’s shadow are over. We no longer lack ambition and capital. Now, Europe is a shining powerhouse of bold, new business models that drive economic growth, generate jobs and improve people’s lives.

We’d all like to see this fair weather continue, but storm clouds are gathering on the horizon.

Europe could be the world’s most entrepreneurial continent but the limited availability of talent to nurture and fuel its blossoming start-up ecosystem is a serious bottleneck to growth. That’s why we, the founders and executives of Europe’s leading tech businesses, now urge policymakers to put talent at the top of their agenda.

Over the next twelve months, Europe’s startups will need to hire more than 100,000 employees. Add to that the number of employees that start-ups yet to be born will need to get their ideas off the ground. Reaching that goal will be hard, but hard things are what we do and we’re ready to rise to the challenge.

Without delay, we call on legislators to fix the patchy, inconsistent and often punitive rules that govern employee ownership—the practice of giving staff options to acquire a slice of the company they’re working for.

This isn’t just a perk on top of a salary: universally, stock options reward employees for taking the risk of joining a young, unproven business, and give them a real stake in their company’s future success. Stock options are one of the main levers that startups use to recruit the talent they need; these companies simply can’t afford to pay the higher wages of more established businesses.

But policies that currently govern employee ownership across Europe are often archaic and highly ineffective. Some are so punishing that they put our startups at a major disadvantage to their peers in Silicon Valley and elsewhere, with whom we’re competing for the best designers, developers, product managers, and more.

If we fail to take action, we could see a brain drain of Europe’s best and brightest, leading to fewer jobs created and slower growth. That’s why we need to create startup-friendly employee share ownership schemes, to help Europe’s tech sector—its greatest engine of growth, innovation and employment—to succeed and thrive in the global labour market.

If we don’t eliminate the talent bottleneck, we risk squandering the incredible momentum that European tech has built up in recent years. The next Google, Amazon or Netflix could well come from Europe, but for that to happen, reforming the rules of employee ownership is definitely not optional.

According to Index Ventures, the company that is coordinating this effort, some countries already have startup-friendly policies, while others lag behind: 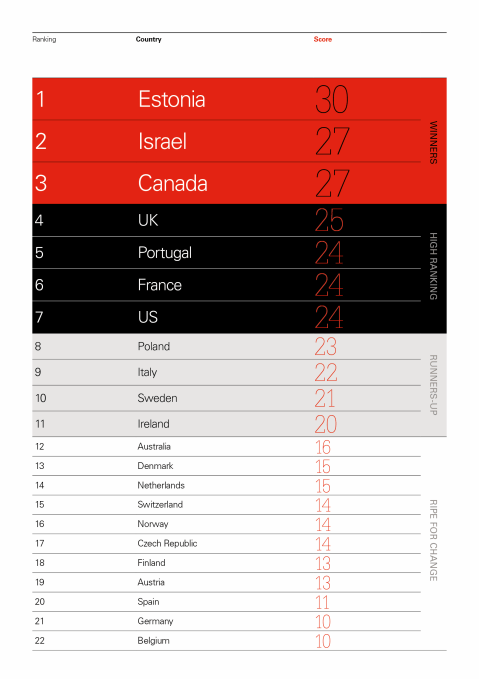 The VC firm recommends overhauling policies in some countries and harmonizing policies across Europe. New rules should follow those six principles: