More U.S. consumers were shopping on mobile devices on Black Friday this year, with $2.1 billion in sales coming from smartphones. This trend was also reflected across the U.S. App Store. According to new data from Sensor Tower out this morning, the top 10 shopping apps on the App Store added half a million first-time users on Black Friday. That’s up 16.3 percent from the same day in 2017, the firm found.

Overall, new shopping app installs grew 9 percent over last year, to reach approximately 1.8 million. To be clear, this number is new downloads, not re-downloads from someone who previously had the app installed on their device, but deleted it at some point. (Of course, those consumers may have already been customers on the web.)

Not surprisingly, Amazon’s app was the most installed, as it has been in years past. But Walmart’s app gained steam as it saw more significant year-over-year growth, the report said.

The rest of the top 10 was rounded out by Wish, Best Buy, eBay, Offer Up, Fashion Nova, Macy’s and JCPenney. This includes both brick-and-mortar and online retailers.

In terms of online-only retailers, the list looked a little different. Amazon was still in the lead, but was then followed by Wish, eBay, Offer Up, Fashion Nova, GOAT, Poshmark, Letgo, Zaful and Shein. 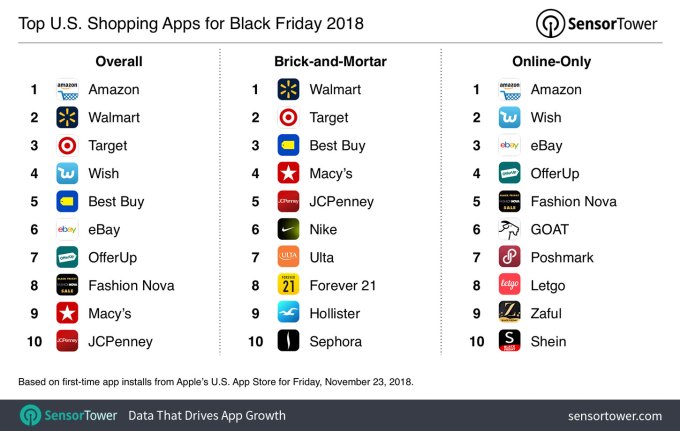 Walmart, meanwhile, was the most-downloaded app out of all the brick-and-mortar retailers, followed by Target, Best Buy, Macy’s, JCPenney, Nike, Ulta, Forever 21, Hollister and Sephora.

Overall, new downloads from the brick-and-mortar apps were up 24.7 percent over last year’s Black Friday, while the online-only apps grew around 20 percent.

In the two-week period including Thanksgiving, Black Friday and Cyber Monday, App Annie was predicting a 25 percent increase in time spent in shopping apps on Android devices — nearly double from the four years prior.

However, the Google Play numbers aren’t in yet to confirm this. They should be available later in the week.