Thanksgiving, a day when brick-and-mortar stores tend to be closed, has become a big one for online spending, and this year did not disappoint, with a surge of consumers rushing to digital platforms to grab sale items while physical stores were closed. This year, US consumers spent a record $3.7 billion on Thanksgiving, according to analysts, with smartphones driving 54.4 percent of traffic to retail sites and 36.7 percent of all e-commerce sales.

Thanksgiving also became the first day of the year to see $1 billion in sales completed on smartphones, Adobe said. It wasn’t the first time this has ever happened, but usually it’s only on Cyber Monday that we’ve seen that shift take place.

Adobe, which puts out real-time analytics tracking e-commerce sales, said that as of 2pm Pacific Time, $1.75 billion was spent online, up from $406 million at 7am — representing respective growth of 28.6 percent growth and 23.2 percent over the same periods in 2017.

This year’s $3.7 billion was nearly 28 percent up on the $2.9 billion that was spent online a year ago. Notably, stronger-than-expected activity led to Adobe revising this figure up after initially projecting $3.1 billion for Thanksgiving sales earlier this month. 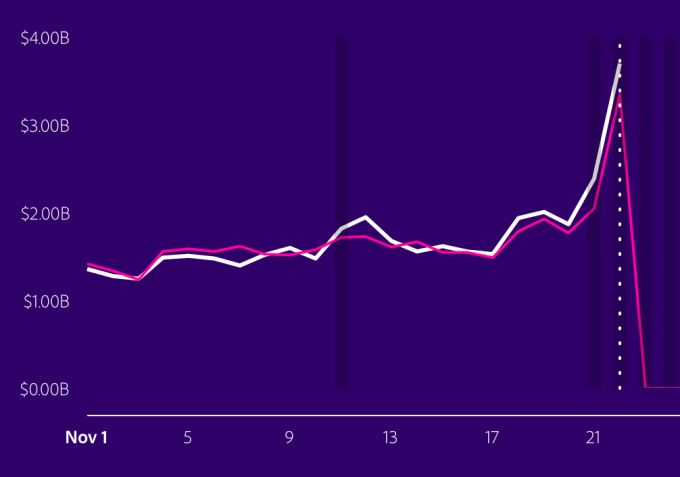 (Adobe tracks e-commerce transactions across 80 of the top 100 US online retailers and says its analytics are based on over 1 trillion visits to retail sites and 55 million SKUs.)

“Black Friday” — the day after Thanksgiving — was once considered the official start of the holiday shopping season, but that start has come earlier and earlier each year, with brick-and-mortar stores kicking off their sales earlier to compete more with internet-based shopping sites.

Between November 1 and Thanksgiving, a total of $38 billion will already have been spent online, up 18.6 percent, with Thanksgiving giving a one percent bump to the whole period overal. Notably, all 22 days in November have hit more than $1 billion in sales, with three days each seeing over $2 billion in spend.

That high spend reaches a kind of zenith in the next four days, when one out of every five dollars will be spent, working out to $23.4 billion in sales (or 19 percent of all holiday season shopping).

Thanksgiving is the first day of the “big five” for holiday shopping. Figures from Internet Retailer research predict that the total amount that will be spent over the period between Thanksgiving and Cyber Monday will be $21.6 billion.

But while rising tides might lift all boats, the biggest will reap the most rewards: it also estimates that Amazon will account for nearly one-third of all sales.

Indeed, Adobe’s figures are extrapolated from what it describes as the 80 biggest online retailers in the US.

So for a closer look at how smaller online retailers are doing, Shopify — which has some 600,000 merchants on its platform has also provided some data. It says that more than $250 million was spent in total with smaller merchants, with peak shopping seeing $465,000 per minute sold during the day. Top purchasing states were those that are the biggest: California, followed by Texas, New York and Florida.

The overall picture, interestingly, is that e-commerce continues to account for between 10 and 20 percent of all retail sales, largely the same proportion that we’ve seen for years. In other words, while the overall pie is growing in size, the proportion of the piece for online commerce does not appear to be changing for the moment.

Figures from eMarketer put overall US holiday sales at retailers at over $1 trillion for this season, while e-commerce will be around $123 billion, or around 12 percent of all sales.

Thanksgiving — when physical stores are mostly closed — continues to be a big holiday for e-commerce, and within that we’re continuing to swing to more mobile commerce with record numbers this year.

Adobe said that more than half — 54.4 percent — of all traffic to retail sites on Thanksgiving Day came from smartphones, up from 46.1 percent on the same day in 2017, and even growing throughout Thanksgiving day (earlier Adobe had said they were accounting for 48.4 percent).

Smartphones also surged on the sales side, taking 36.7 percent of all e-commerce sales by 2pm yesterday (earlier in the day: it was 28.2 percent). Desktop remained in the lead at 52.8 percent, but the gap is narrowing. Tablets accounted for 10.5 percent of sales.

The large lag in traffic and sales for tablets really underscores how these devices have failed to become a category to regard in and of themselves. At one point, it looked like they would give smartphones a run for their money in e-commerce because they had bigger screens, making shopping easier. But as smartphones have gotten bigger and stronger, and commerce technology has moved along, the market hasn’t moved the way people thought it would.

Still, Adobe points out that some $4.3 billion of goods will get left on the table, so to speak, on smartphones: people are still abandoning their carts before checking out, a sign that the experience still has a lot of room for improvement.

These numbers are largely in line with how spending has played out the rest of the month, although smartphones have seen a bump: 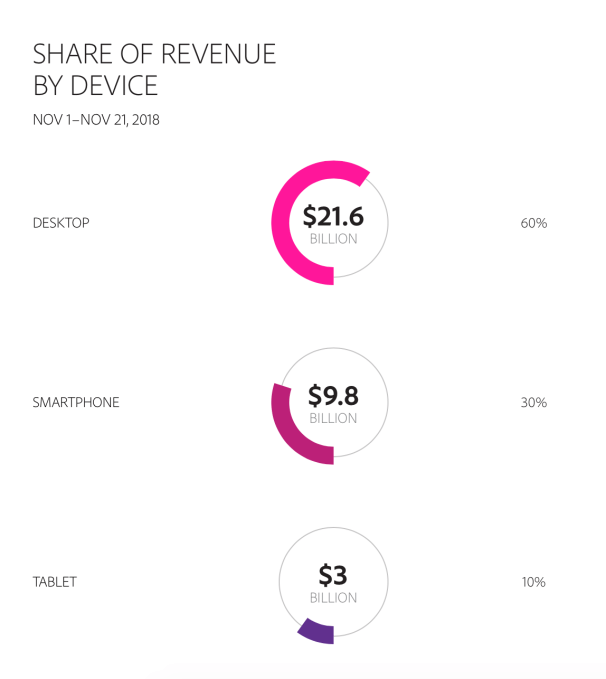 The 2018 holiday season has been predicted to be a bumper year for e-commerce, helped by economic forces like lower unemployment and underlying trends like more shoppers opting to spend their money online.

“Pre-Thanksgiving deals appear to have enticed consumers to spend a little earlier as we saw our second $2 billion day of the holiday shopping season,” said Schreiner.

Adobe said that this year will see an even higher total than previous years because of how the calendar works out: there will be an extra day between Thanksgiving and Christmas, working out to $284 million spent.

In terms of products that are doing well so far, Adobe singled out the Nintendo Switch, Fingerlings Hugs, Little Live Pets and L.O.L Surprise, HP Laptops, Chromecast and Drones. The top game is Call of Duty Black Ops 4.

Discounts will be coming in strong through Cyber Monday, but they are already starting. Average savings, Adobe noted, include 16.3 percent for computers, 4.7 percent for TVs and 12.2 percent for toys.

I am not sure how and why retailers would coalesce around these trends, but apparently today is best for sporting goods (discounted on average by 13 percent). Black Friday is best for computers (16 percent) and tablets (33 percent). The Sunday before Cyber Monday will see the best deals for apparel (22 percent), appliances (18 percent) and jewelry (5 percent) (seems to be a “female” theme there), and the biggest discounts for toys will happen Cyber Monday (19 percent), when kids are back at school and can’t peek over their parents’ shoulders as they are snapping up stuff to put under the tree.