Fifteen weeks after Facebook announced its “Your Time on Facebook” tool that counts how many minutes you spend on the app, the feature is finally rolling out around the world. Designed to help you manage your social networking, the dashboard reveals how many minutes you’ve spent on Facebook’s app on that device each day for the past week and on average. 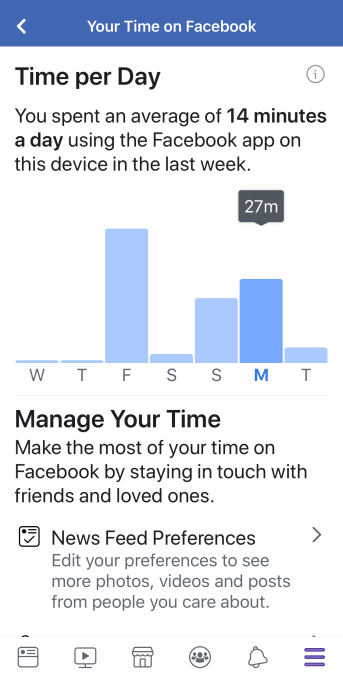 You can set a daily limit and receive a reminder to stop after that many minutes each day, plus access shortcuts to notification, News Feed and Friend Request settings. Those last two shortcuts are new, but otherwise the feature works the same as when it was previewed. You can access it by going to Facebook’s More tab -> Settings & Privacy -> Your Time on Facebook.

TechCrunch first broke the news that Facebook was working on the feature in June. Facebook gave some explanation for the delayed access to the feature, with spokespeople telling me “We typically roll out features slowly so we can catch bugs early and resolve them quickly. We slowed the rollout of the tools after launch so our teams could fix a few bugs before we expanded globally,” and that “the tools will continue rolling out over the next few weeks.” Social consultant Matt Navarra had spotted the tool reaching more users today.

With the launches of similar tools as part of the latest versions of iOS and Android, plus the roll out of the similar Your Activity tab on Instagram last week, digital well-being features are becoming available to a wide swath of smartphone users. The question is whether simply burying these features in the Settings menus is enough to actually get people to shift toward healthier behavior.

Facebook and Instagram’s versions are particularly toothless. There are no options to force you to ease off your usage, just a quick daily limit notification to dismiss. iOS 12’s Screen Time at least delivers a weekly usage report by default so the feature finds you even if you don’t go looking for it. And Android’s new Digital Wellbeing dashboard is by far the most powerful, graying out app icons and requiring you to dig into your settings to unlock apps once you hit your daily limit. Facebook doesn’t necessarily need to force heavier restrictions on us, but it should at least provide more compelling optional tools to actually make us put our phones down and look up at the real world.

Facebook’s dashboard doesn’t integrate with Instagram’s, which would give people a more holistic sense of their activity on the social networks. You also won’t have your desktop Facebooking or time on secondary mobile devices like tablets tabulated here either.

But the biggest flaw remains that Your Time on Facebook treats all time the same. That seems to ignore the research Facebook itself has presented about digital well-being on social networks, as well as CEO Mark Zuckerberg’s comments on what constitutes healthy and unhealthy behavior. Zuckerberg said on the Q1 2018 earnings call “the well-being research that we’ve done . . . suggests that when people use the internet for interacting with people and building relationships, that is correlated with all the positive measures of well-being that you’d expect — like longer term health and happiness, feeling more connected and less lonely – whereas just passively consuming content is not necessarily positive on those dimensions.” 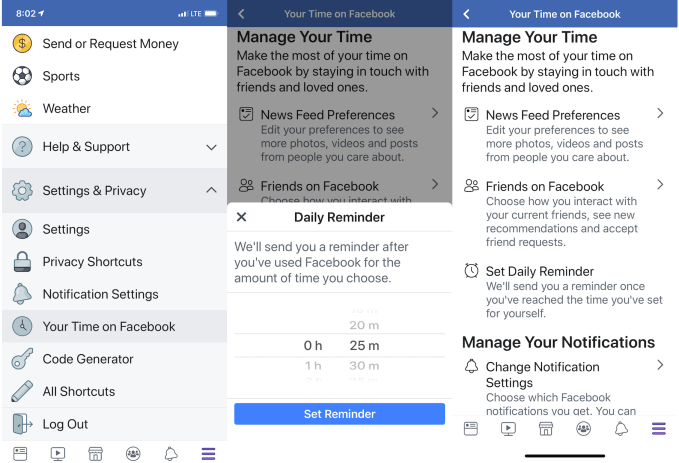 Yet you can’t tell active and passive Facebooking apart from the dashboard. There’s no way to see a breakdown of how long you spend browsing the News Feed, watching Stories or exploring photos on profiles versus creating posts or comments, messaging or interacting in Groups. That segmentation would give users a much clearer view of where they’re spending or wasting hours, and what they could do to make their usage healthier. Hopefully with time, Facebook gives the dashboard more nuance so we can track not just time, but time well spent.