Are you ready for some scary numbers? After months of Mark Zuckerberg talking about how “Protecting our community is more important than maximizing our profits,” Facebook is preparing to turn that commitment into a Time Well Spent product.

Buried in Facebook’s Android app is an unreleased “Your Time on Facebook” feature. It shows the tally of how much time you spent on the Facebook app on your phone on each of the last seven days, and your average time spent per day. It lets you set a daily reminder that alerts you when you’ve reached your self-imposed limit, plus a shortcut to change your Facebook notification settings.

Facebook confirmed the feature development to TechCrunch, with a spokesperson telling us, “We’re always working on new ways to help make sure people’s time on Facebook is time well spent.” 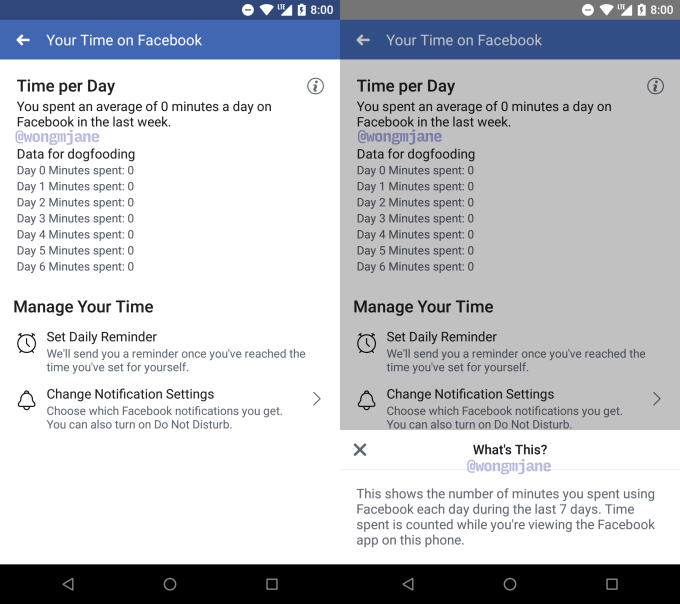 The feature could help Facebook users stay mindful of how long they’re staring at the social network. This self-policing could be important since both iOS and Android are launching their own screen time monitoring dashboards that reveal which apps are dominating your attention and can alert you or lock you out of apps when you hit your time limit. When Apple demoed the feature at WWDC, it used Facebook as an example of an app you might use too much.

Our report on Instagram Usage Insights led the sub-company’s CEO Kevin Systrom to confirm the upcoming feature, saying “It’s true . . . We’re building tools that will help the IG community know more about the time they spend on Instagram – any time should be positive and intentional . . . Understanding how time online impacts people is important, and it’s the responsibility of all companies to be honest about this. We want to be part of the solution. I take that responsibility seriously.”

Facebook has already made changes to its News Feed algorithm designed to reduce the presence of low-quality but eye-catching viral videos. That led to Facebook’s first-ever usage decline in North America in Q4 2017, with a loss of 700,000 daily active users in the region. Zuckerberg said on an earnings call that this change “reduced time spent on Facebook by roughly 50 million hours every day.”

Zuckerberg has been adamant that all time spent on Facebook isn’t bad. Instead, as we argued in our piece “The difference between good and bad Facebooking,” its asocial, zombie-like passive browsing and video watching that’s harmful to people’s wellbeing, while active sharing, commenting and chatting can make users feel more connected and supported.

But that distinction isn’t visible in this prototype of the “Your Time on Facebook” tool, which appears to treat all time spent the same. If Facebook was able to measure our active versus passive time on its app and impress the health difference, it could start to encourage us to either put down the app or use it to communicate directly with friends when we find ourselves mindlessly scrolling the feed or enviously viewing people’s photos.