China’s Ucommune, the country’s largest rival to WeWork, has been on a busy acquisition spree to build out its domestic business and now it is looking at overseas opportunities after it closed a $200 million Series D funding round.

The new round was led by Hong Kong-based All-Stars Investment with participation from Chinese investment bank CEC Capital and other investors. Ucommune said in a statement that the deal gives it a valuation of $3 billion, that represents a significant jump on its Series C in August which valued it at $1.8 billion. This new round takes Ucommune to around $650 million from investors to date, according to Crunchbase.

Founded in 2015, Ucommune has emerged as WeWork’s main rival in China since the U.S. firm acquired Naked Hub earlier this year in a deal said to be worth $400 million. Ucommune claims to operate more than 200 co-working spaces, most of those are in China but its overall footprint of 37 cities also includes Singapore, New York, Taipei and Hong Kong. Clients include unicorns ByteDance, Ofo and Mobike, as well as streaming service Kuaishou, according to Ucommune. WeWork China, by contrast, has around 40 locations.

Co-working has been a major buzzword in China following the growth of WeWork but as time went on a mixture of competition and China’s slowing economy saw a number of the field struggle. That presented an opportunity for Ucommune, which has aggressively gone after growth in China with a consolidation strategy that has seen it acquire no fewer than seven companies this year.

Its most recent addition was Fountown, which operates 27 spaces in Beijing and Shanghai and was acquired last month, while the others include co-working businesses — Wedo, Workingdom, Woo Space and New Space — an interior design company and a workplace collaboration startup.

Now, Ucommune is looking for ambitious international growth that’s aimed at expanding its reach to 350 cities across 40 countries. The ultimate goal, it explained in an announcement today, is to double its capacity from 100,000 workstations today to 200,000 over the next three years. 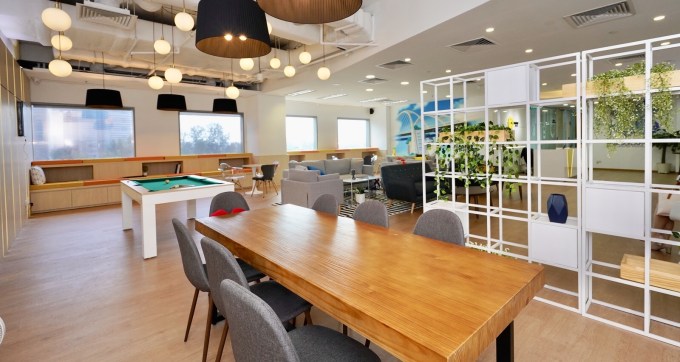 Going global is no easy thing, particularly when WeWork is on the case in many parts of the world with buckets of cash. The U.S. firm is currently making a big push in Southeast Asia — the most logical market for Ucommune to target first — with plans to launch locations in Vietnam, the Philippines and Thailand in the coming months. That would take WeWork to five countries in Southeast Asia, where it got a head start thanks to its acquisition of Singapore’s SpaceMob.

Ucommune has two locations in Singapore already but next time up is Hong Kong, where it says it is on track to open an inaugural space in December with a second slated for the first quarter of next year.

But WeWork is also strong its U.S. home market, Europe, Japan — where it works with SoftBank — and Korea, where it already has more than a dozen spaces. The firm has raised more than $1 billion for its China business and around $500 million for Korea and Southeast Asia.

Beyond a rivalry in China, Ucommune and WeWork have also engaged in a legal spat. WeWork forced its rival to change its name from UrWork after it took the company to court last year over the similarity.