Online advertising reached $88 billion last year, a 21 percent increase from 2016 and a new high, according to the latest IAB Internet Advertising Revenue Report.

The report is prepared by PricewaterhouseCoopers for the Interactive Advertising Bureau, a trade organization of online advertisers and publishers.

Aside from stumbling after the financial crisis a decade ago, the numbers have been on a pretty steady march upwards, setting new records every year. But the IAB says digital ad spending crossed a particularly noteworthy milestone last year — for the first time, digital exceeded the total amount spent on broadcast and cable TV ads ($70.1 billion).

And mobile advertising continued to claim even more of the pie. It already accounted for the majority of digital ad spend in 2016, and in 2017, it grew to $49.9 billion (57 percent of the total, and a 36 percent year-over-year uptick).

PwC US Partner David Silverman said that there are four main factors driving the continued growth — improvements in technology, the ability to target large scale audiences, the availability of self-serve platforms for small business advertising and the rise of brands that sell directly to consumers, usually online. 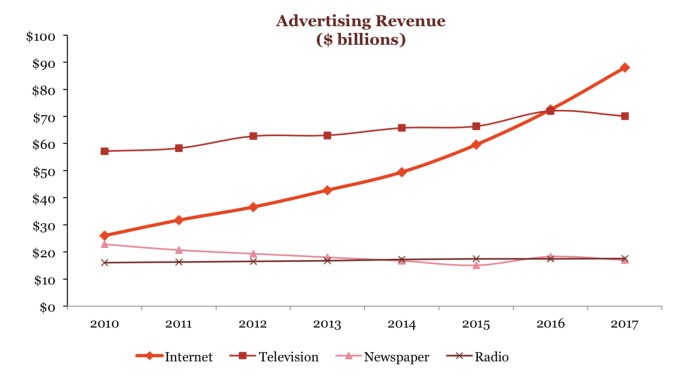 In the past, the IAB has suggested that much of this growth is coming from new advertisers, rather cannibalizing revenue from other channels. When I brought the issue up this week, Silverman said the real trend is “convergence.”

“I’d say the cannibalization that has occurred over time is eyeballs shifting away from traditional media,” he said. “This is an area that’s going to continue to really drive growth — the convergence of media and particularly video. At some point, people only watched TV at home, on their living room couch. Now people watch it on any device, anywhere.”

“It’s about giving the user what he wants, when he wants it, on whatever platform he may be on,” added Anna Bager, the IAB’s executive vice president for industry initiatives.

The report comes at a time when the big advertising platforms are under increased scrutiny (and, in Europe, regulation). But Facebook and Google continue to exceed revenue expectations. And while the report doesn’t break out ad spending for any one company, it says the top 10 ad sellers accounted for 74 percent of ad spending in the most recent quarter (so it’s within the recent historical range of 70 to 75 percent).