Facebook is bursting out of the ones and zeros into the physical realm with nine brick-and-mortar pop-up stores that will show off goods from 100 small business and online brands. Facebook organized the merchants to be part of The Market @ Macy’s, which first launched earlier this year to create temporary spaces for businesses. The merchants keep all their sales revenue, with Facebook and Macy’s taking no revenue share, and Facebook paid for each merchant’s one-time fee that Macy’s charges for the space. The stores feature News Feed post-themed displays complete with like button imagery so it feels like you’re shopping Facebook in real life.

While Facebook doesn’t earn money directly from the stores, it could convince the small businesses and others like them to spend more on Facebook ads. Alongside recent tests of advanced Instagram analytics and instant Promote ads for Stories, Facebook wants to build a deeper relationship with small businesses so this long tail of advertisers sticks with it as sharing and marketing shift from the News Feed toward Stories and private messaging. 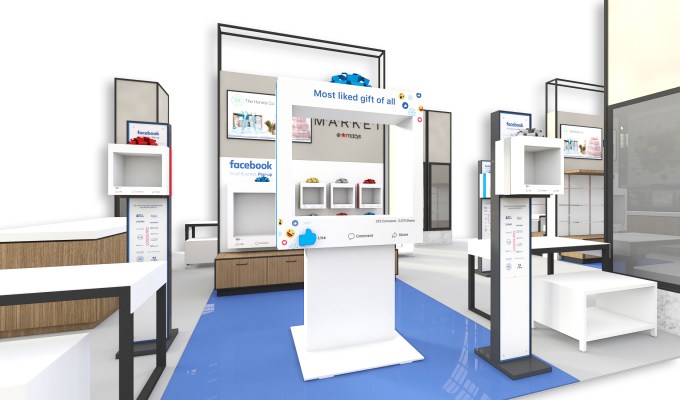 “All over the world people are running businesses, big and small, that have inspiring stories and we want to help them succeed. We are thrilled to be partnering with one of the world’s biggest retailers to bring some of those businesses to a physical store this holiday season,” writes Facebook’s Director of North America Marketing Michelle Klein. “Macy’s shoppers will have the chance to meet businesses like Love Your Melon that sells hats and apparel to help in the fight against pediatric cancer, or Charleston Gourmet Burger Company that started from a backyard barbecue and has expanded to reach customers in all 50 states.”

The nine pop-ups will be open from today until February 2nd in The Market @ Macy’s in NYC, Pittsburgh, Atlanta, Fort Lauderdale, San Antonio, Las Vegas, Los Angeles, San Francisco and Seattle. The brands come from across apparel, lifestyle, food, beauty and other verticals, and include Two Blind Brothers, Bespoke Post, Inspiralized, Mented Cosmetics and Link. Facebook seems taken with the idea of having a physical presence in the world, with the pop-ups coming just days before Facebook starts shipping its first hardware product, the Facebook Portal video chat device. 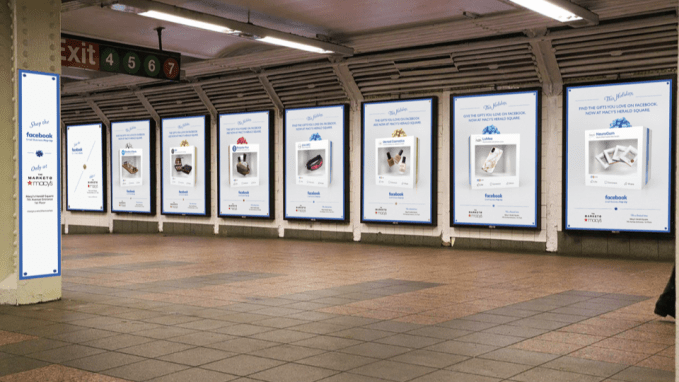 Facebook will also run a big ad campaign of its own in NYC’s Grand Central Station for the next three weeks to promote the pop-ups, featuring 600 ad units with 36 designs across 115 locations in the public transportation hub. Facebook will also run ads for the stores on its app and Instagram, and provide the merchants with complementary digital ad design from Facebook’s Creative Shop.

Facebook’s revenue growth has been massively decelerating, dropping from 59 percent year-over-year in Q3 2016 to 49 percent in Q3 2017 to 33 percent in Q3 2018. That’s introduced uncharacteristic share price declines and volatility for Facebook’s historically stable business. Delighting small businesses with experiences like the pop-up stores could keep them loyal as Facebook’s ad formats shift toward more vivid and interactive formats that can be tough for budget-strapped merchants to adopt.