Apple is preparing to launch a new way for its customers to track election results. At 8 PM ET on November 6, the company will swap out the existing Midterm Elections section in the Apple News app and replace it with a new Election Night section instead. This section will also replace Apple News’ Digest tab at the bottom-center of the app, in order to lead users directly to the special section where they’ll be able to track the live results, updates on key races, latest developments and more.

The company is partnering with the Associated Press for its real-time election results, as do many news organizations thanks to AP’s history and experience with verifying results.

Here, Apple will use that AP data to inform a number of dynamic infographics, as well as offer a complete list of federal election results in every state, including House and Senate seats.

These results will update every minute, or you can just “refresh” the page manually to force the update at any time. 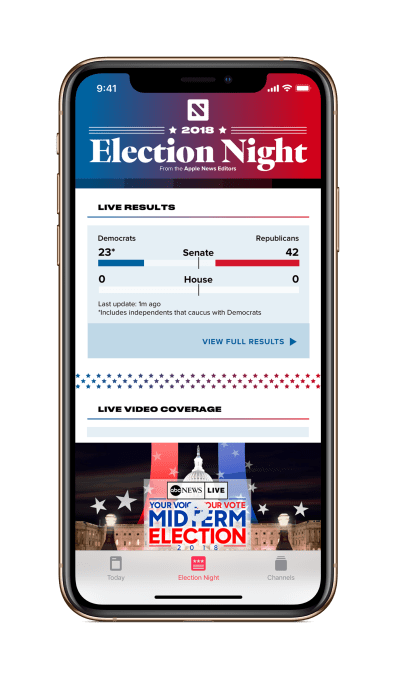 If the balance of power in either the House or the Senate is determined by way of the incoming results, Apple News will publish a special alert at the top of the feed and a pop up notification, as well.

The Key Races section, meanwhile, offers another set of live updating infographics, showing the live results from the most interesting House, Senate or Gubernatorial races.

Another section will focus on the latest developments — meaning breaking news headlines and stories related to election night coverage. This will feature news from a variety of sources, including Axios, Politico, The Washington Post, Fox News, CNN, The New York Times, CBS and others. 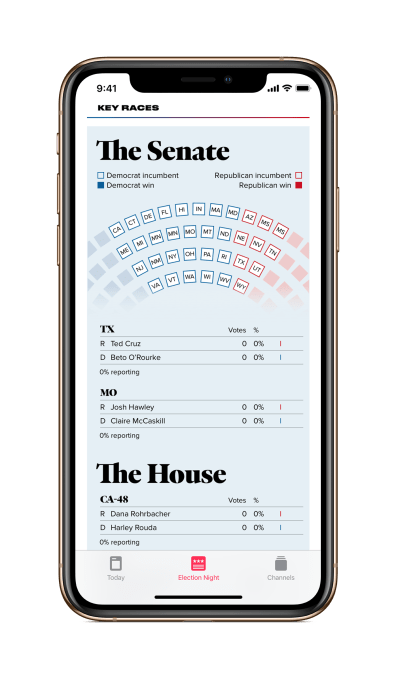 CBS News, CNN and Fox News will also contribute video clips to the Election Night hub, while ABC will offer a live video feed. Another live video feed from NBC News will appear in a widget alongside the Live Results infographic.

Apple says users won’t have to authenticate with their TV provider on election night to watch the videos in the hub.

A diversity of news sources was important to Apple, which wanted to have a range of options for people to read, as well as a way to present the news so people could see how it’s being processed across the ideological spectrum.

More importantly, all the news coverage in the hub isn’t being driven by algorithms. For Apple News’ team, Election Night is an all-hands-on-deck type of situation involving real human editors. In fact, human editorial oversight is a key difference between Apple’s approach to news aggregation and curation, compared with competitors like Google, Twitter and Facebook — all of which have come under fire for their outsized roles in the spread of information, and, at times, disinformation.

Apple has been taking the opposite approach, by staffing up an editorial team of former journalists instead of leaving news curation to technology.

Apple News is available across iPhone, iPad and, as of this year, Mac devices.