Flickr is making some big changes, following its acquisition by SmugMug earlier this year. The company announced this week it’s addressing a series of issues on the site, including spam, customer support and use of the Yahoo login, for example. But more notably, it’s also revamping its account structure to impose increased limits for free users, while rolling out unlimited storage for Pro subscribers.

Back in 2013, Flickr introduced a full terabyte of free storage for members — a move it hoped would bring more users to its service. But in the years since, consumers have shifted to services like Apple’s iCloud and Google Photos, which are integrated with iPhones and Android smartphones, as a way to back up their photos.

The free storage attracted the wrong kind of user to Flickr, says Andrew Stadlen, VP of Product at Flickr, in an announcement explaining the move.

“In 2013, Yahoo lost sight of what makes Flickr truly special and responded to a changing landscape in online photo sharing by giving every Flickr user a staggering terabyte of free storage. This, and numerous related changes to the Flickr product during that time, had strongly negative consequences,” Stadlen writes.

“First, and most crucially, the free terabyte largely attracted members who were drawn by the free storage, not by engagement with other lovers of photography. This caused a significant tonal shift in our platform, away from the community interaction and exploration of shared interests that makes Flickr the best shared home for photographers in the world,” he adds.

In other words, the company doesn’t want to be an online shoebox any more — it wants to return to being a real photo community.

The other issue Flickr’s new team has with the “free storage” giveaway is that it meant the Yahoo-owned Flickr was beholden to advertisers. Shifting to a subscription model allows Flickr’s new owners, SmugMug, to focus on building features for members, not advertisers.

Stadlen also says that giving away storage devalued Flickr in users’ eyes — they no longer saw it as a product worth paying for.

Flickr now aims to change that by revamping who Flickr is for. It’s reducing free storage to 1,000 photos — a limit it came up with based on observations of how free and Pro members were already using the site. The vast majority of free users have fewer than 1,000 photos uploaded, so won’t be impacted, the company claims.

Pro members can now choose to upgrade to a paid plan for $5.99 per month, or they can save 30 percent and pay $50 per year, when they opt for annual billing. 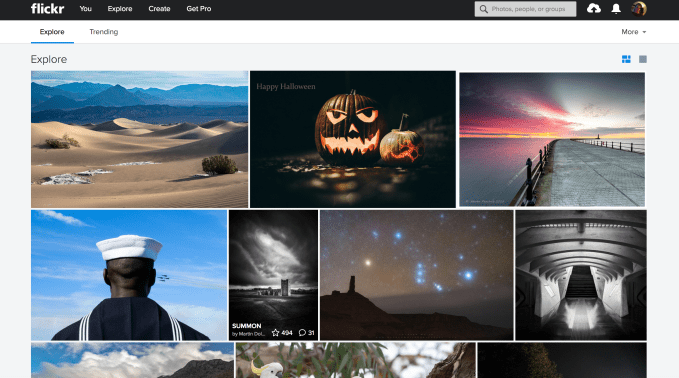 Alongside the news of the account changes, the company announced product changes to the site itself. Flickr is rolling out support for photo resolutions up the 5K (5120 x 5120) — that’s 26 megapixels, or up to 6X larger than Flickr’s current 4 megapixel maximum, notes Don MacAskill, co-founder and CEO at SmugMug.

He says Flickr will also offer full support for embedded color profiles across all modern browsers, devices and displays; and will introduce improvements to the photo ingestion process for faster uploads with fewer errors.

Customer support is getting a revamp, too, with a dozen experts who will respond to members’ issues, an expanded self-help section and a new Trust & Safety department.

The company says it’s now partnered with Sift to help fight spam, and with cybersecurity firm HackerOne to continually test its defense systems. The latter is particular helpful given the stain Flickr has on its name by being associated with Yahoo, whose data breaches impacted billions.

The new Flickr will also dump the Yahoo Login, with a new login rolled out to the site in early 2019 that will allow users to sign up with any email address, not just a Yahoo account.

The changes go to address a number of complaints users — especially pro photographers — had with Flickr during its Yahoo years. The challenge, however, is to win back the disgruntled customers, and get them to pay for storage and features.

MacAskill believes SmugMug will be able to do so, by listening and working with Flickr’s community.

“We bought Flickr because it’s the largest photographer-focused community in the world. I’ve been a fan for 14 years. There’s nothing else like it. It’s the best place to explore, discover, and connect with amazing photographers and their beautiful photography,” he says. “Flickr is a priceless Internet treasure for everyone and we’re so excited to be investing in its future. Together, hand-in-hand with the the most amazing community on the planet, we can shape the future of photography.”

(Disclosure: Yahoo merged with AOL to become Oath, which also owns TechCrunch. Flickr is no longer owned by Yahoo or Oath as SmugMug bought it in April, 2018.)