Live-streaming TV services, like Sling TV, PlayStation Vue, Hulu with Live TV and others, are gaining steam in the U.S. as more consumers cut the cord with traditional pay TV. According to a new report from Conviva out this morning, these services (called virtual MVPDs) now account for more than three-quarters of all plays and viewing hours in the U.S., when compared with standalone apps from individual publishers, which have declined in usage.

Over the past 12 months, streaming TV services — the virtual MVPDs like Hulu with live TV, Sling TV, or PlayStation Vue — have seen a 292 percent increase in plays and a 212 percent increase in viewing hours, while publisher apps have seen declines of 16 percent and 19 percent, respectively, across those fronts.

The services have also been improving over time. Many suffered from glitches and outages at launch — and this continues today, on occasion. But overall, they’re more stable than in the past.

The report found that across these streaming TV services, there’s been a 22 percent decrease in video start failures, a 7 percent shorter wait time for video to start playing, 25 percent higher picture quality and 63 percent less buffering.

The draw of streaming TV services is a cable TV-like experience with added benefits, like the ability to watch across devices, record shows to a cloud DVR that’s not (in theory) limited by disk space on a set-top box, integration with your smartphone’s notification system for alerts about favorite shows or events and more.

But the ability to tune into live content — like live events and sports — is a major draw for cord cutters, as well.

In the weeks that games were airing, NFL viewership accounted for 3 percent of total plays and 2.8 percent of all viewing hours in the U.S.

Because many viewers tune in at the same time to watch a live broadcast, compared with other content, there’s still room for improvement on this front. The firm also found that live television streams take 10 percent longer for videos to start, and see 72 percent more exits before the video starts, as a result.

The way consumers are watching streaming TV services is changing, too, the study said.

Though one benefit of these newer services is no longer being tied to a TV for viewing, it seems many still prefer it. While mobile viewing continues to grow — it’s up 57 percent year-over-year — it no longer dominates. 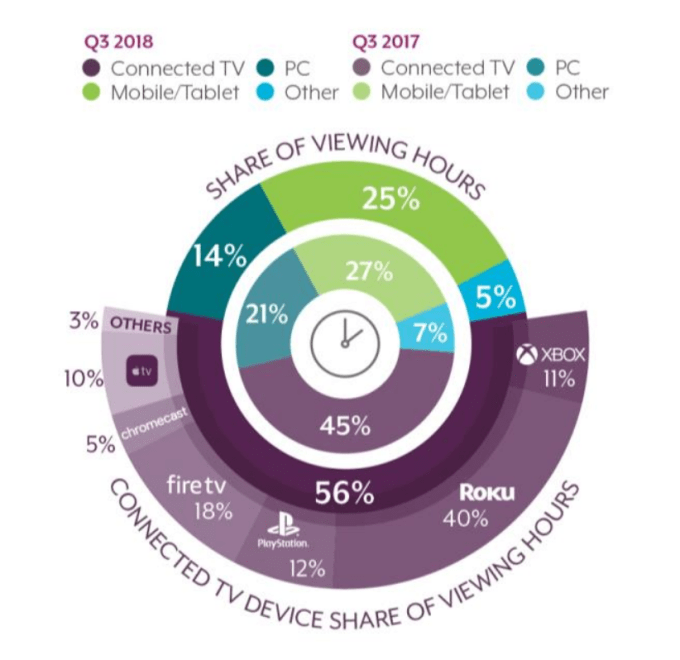 Connected TVs — such as those connected to Roku players, Amazon Fire TV, Apple TV, etc. — now account for as many streaming TV plays (38 percent on TVs) as mobile devices (39 percent). They also account for more than twice the viewing hours, with a 56 percent share to mobile’s 25 percent share.

Viewing on the PC is down by 18 percent, meanwhile.

The report is a snapshot of the industry that comes from Conviva’s global footprint of 50 billion streams per year across 3 billion applications and 200 million users. The company works with brands like Sling TV, HBO, Sky, Turner, Hulu, Discovery, CBS, Canal Digital and others. That gives it deep insight into the streaming TV space to see trends, but not a complete look as not all providers are Conviva customers.