Walmart’s warehouse club, Sam’s Club is preparing to open the doors at a new Dallas area store that will serve as a testbed for the latest in retail technology. Specifically, the retailer will test out new concepts like mobile checkout, an Amazon Go-like camera system for inventory management, electronic shelf labels, wayfinding technology for in-store navigation, augmented reality, and artificial intelligence-infused shopping, among other things.

The retailer first announced its plans to launch a concept store in Dallas back in June, which was then said to be a real-world test lab for technology-driven shopping experiences.

Today, the company is taking the wraps off the project and is detailing what it has planned for the new location, which goes by the name “Sam’s Club Now.”

Like other Sam’s Club stores, consumers will need a membership to shop at Sam’s Club Now. But how they shop will be remarkably different.

Instead of cashiers, the store is staffed with “Member Hosts,” who will act more like concierges, the company says.

And instead of scanning items at a point-of-sale cashier stand, customers will use a specialized Sam’s Club Now mobile app.

The app leverages Sam’s Club existing “Scan & Go” technology, which is used today across its retail locations to help speed up checkout. With the current Scan & Go mobile app, shoppers can opt to scan items as they place them in their cart, then pay right on their phone. At Sam’s Club Now, however, the use of mobile scan-and-pay is required, not optional. 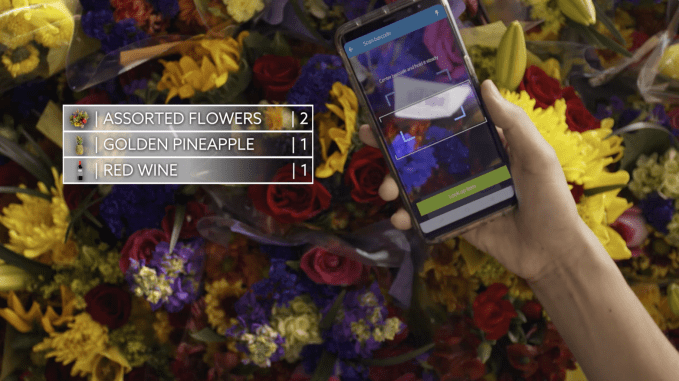 The Sam’s Club Now app will also be infused with other features the company wants to try out, including an integrated wayfinding and navigation system, augmented reality features, an A.I.-powered shopping list and more.

At launch the app will offer a built-in map for finding the right aisle for a given product, but over time, this mapping system will be upgraded to use beacon technology and will be tied to the customer’s shopping list to map their best route through the store. 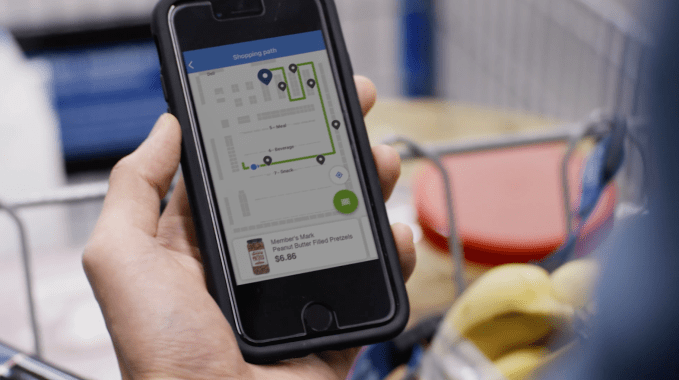 The shopping list will also be powered by A.I. Using a combination of machine learning and customer purchase history, the list will be pre-populated with customers’ frequent purchases. Those items can be removed from the list, if not needed.

Meanwhile, the app will allow Sam’s Club to test augmented reality as a way of highlighting “stories’ about the products being sold and their features, as well as providing a way to find out how items are sourced. This seems more gimmicky, though, as it’s unlikely that customers are interested in this sort of “infotainment” when just trying to get their shopping done.

But at very least, the test store gives the retailer a chance to confirm that supposition with real world data.

The app will also allow members to place pickup orders that will be ready in just an hour, or place same-day delivery orders. The lack of cashiers won’t be the only difference between this Sam’s Club Now and other locations. The store will also be just a quarter of the size of an average club, at 32,000 square feet. That means it will feature, in some cases, smaller pack sizes than at the other warehouse club locations.

Because of the smaller size, it will also feature a quarter of the usual staff at 44 associates. But the goal is not to eliminate staff and replace them with technology, the retailer claims.

The company says it will include a range of products like meats, fresh foods, frozen items, beer and wine and meal solutions.

More importantly, it will also include a new inventory management and tracking technology. Down the road, a system of over 700 cameras will be used to help the retailer manage the inventory and optimize the store layout.

On the shelves, it’s also testing electronic shelf labels that will instantly update prices, eliminating the need to print out paper signage.

These are not third-party systems, the retailer says.

“The vast majority of technologies that we’re building here are technologies that we’ve developed in house. There may be pieces of modules of things that we’re using from third parties. But the majority are systems that are building on the technology that we’ve developed here,” said Jamie Iannone, CEO of SamsClub.com and EVP of Membership & Technology. “That allows us to iterate and move pretty quickly with it,” he noted. By “quickly,” the retailer means things can change in a matter of weeks. The store plans to rapidly iterate on new and different experiences across computer vision, A.I., A.R., machine learning, and robotics.

The winners will then be rolled out to other Sam’s Club locations across the U.S.

The retailer says Dallas was selected as a test market because it’s an easy trip from Walmart’s headquarters in Bentonville, Arkansas, and because of Dallas’ tech talent and the recruiting potential. The company today has over 100 engineers in the area, and it plans to hire more in the areas of machine learning, A.I. and computer vision.

It’s worth noting, too, that Sam’s Club Now has been set up, developed and made ready for opening in just five months.

The store will officially open to on an invite basis to local members for testing as soon as next week. The grand opening to the public is tentatively scheduled for a couple weeks out.