These findings, and more, were the subject of a “state of the industry” report released today by StreamElements, which also dug into what’s making these live streaming sites tick.

Of course, Twitch is still the market leader, with around 750 million monthly viewers, on average, who watched over 813 million hours in September. YouTube Live, by comparison, saw over 226 million hours that month, and Microsoft’s Mixer saw just 13+ million. 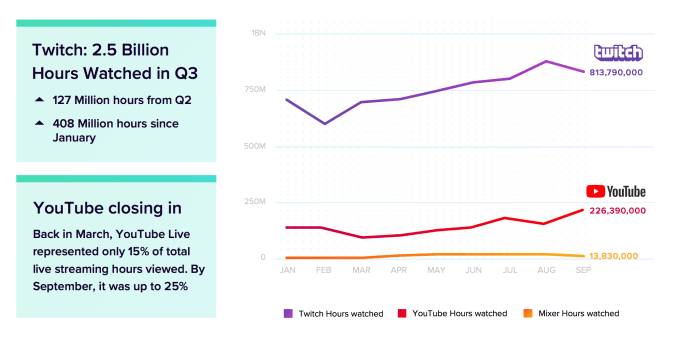 Also of note is that Twitch’s growth is now coming from the long tail, the report claims. Its top 100 channels haven’t grown much since the beginning of the year – in fact, they’re down a bit, according to the findings. In January 2018, viewers watch around 262 million hours on the top 100, which dropped to 254 million in September.

In addition, Twitch is growing viewership thanks to its expanded focus outside of gaming content. IRL streaming – meaning, watching creators “in real life” going about their day, vlogging, or participating in other activities, for example – is now one of the site’s most consistently growing categories, with 41 million more hours watched in Q3 2018 than in Q1.

This growth likely impacted Twitch’s recent decision to do away with the overarching “IRL” category to instead break down the content into subcategories like music, food & drink, ASMR, beauty, and more, and other organizational changes to its site. 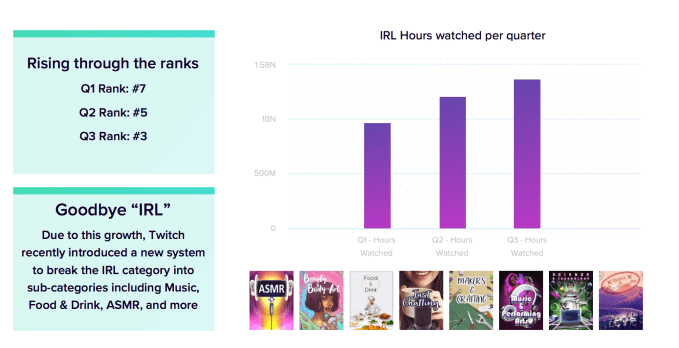 StreamElements also claims that game streams and other content – but not the competitions known as “esports” –  are what’s attracting viewers.

Esports viewership now makes up 9 to 17 percent of overall Twitch viewership, the report says. (This is consistent with findings Newzoo has reported in past years, as well.) 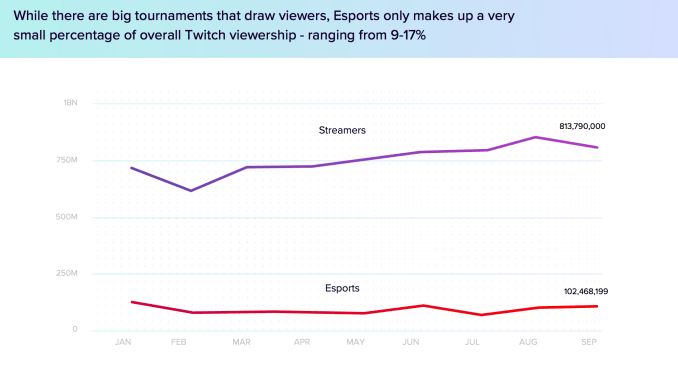 The report’s data, however, is not first-party – it comes from StreamElements’ position as a production and community management solutions provider for live streamers, which allows it some insight into live streaming trends. The company also partnered with streaming analysts StreamHatchet to compile this report, it says.

That being said, it’s not the only one to point to YouTube’s more recent growth. In StreamLabs’ Q2 report this year, it also found that YouTube’s live gaming streams were on the rise, as was viewership. But StreamLabs tends to look at concurrent streams and viewership, so it’s not a direct comparison.

YouTube recently did away with its standalone YouTube Gaming app, and incorporated gaming content more directly into its main site. This could impact its future growth even more than is reflected in this Q3-focused report.

Finally, the report also found that Fortnite’s popularity may have peaked – it’s still the most watched game on Twitch, but since reaching over 151 million hours watched in July, it’s been shedding viewers. The game saw 20 million fewer hours viewed in August, then dropped by another 25 million hours in September.