Streaming news company Cheddar announced this morning it’s acquiring Rate My Professors, the Viacom-owned site where students go online to rate and review their professors and schools across the U.S. The site, founded in 1999, has become something of a staple on the web, and by its nature it attracts the young demographic that Cheddar itself is also after.

According to Cheddar, Rate My Professors is being used by more than 6 million college students per month, who write an average of 125,000 new professor and class ratings monthly. Seasonally, these figures peak at 7 million and 300,000, respectively.

The site traffic has been steadily growing year-over-year, and it now boasts 20 million total ratings across 1.8 million professors. Its iOS app has thousands of reviews, and a 4.8 star rating, as well.

Cheddar already has big plans for its new purchase, promising a site redesign and a set of features for professors, it says.

“Rate My Professors is a trusted tool for millions of students each month; we’re excited to redesign the site, improve the user experience, and offer students a better toolset to search, evaluate and compare professors” said Eric Harris, President and Chief Operating Officer of Cheddar, in a statement. “In 2019, we also plan to offer educators a premium toolset similar to those offered to employers by Glassdoor.” 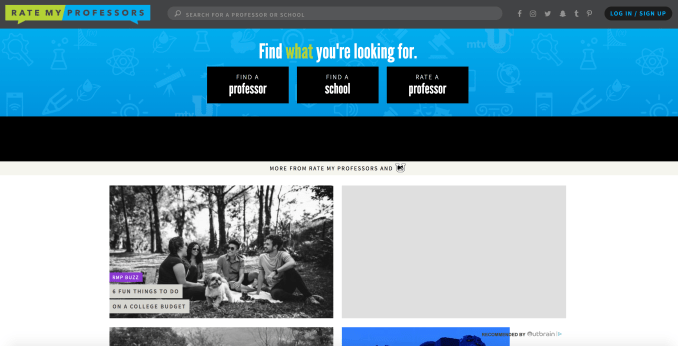 Despite the overlap in demographics, the site isn’t the most obvious choice for Cheddar, whose key focus to date has been on its streaming news networks.

It also operates the place-based CheddarU network across 1,600 on 600 campuses – or a reach of 9 million students.

As part of the deal, Cheddar says it’s bringing in Taboola as a strategic in-feed discovery partner for Cheddar’s Rate My Professors. Taboola says it will bring an infinite scrolling experience to the site, through its Taboola Feed – a personalized experience designed for those who grew up scrolling through social media.

Rate My Professors is not the first move Cheddar has made recently as a part of a strategy to reach the coveted younger demographic.

It also in May 2018 bought Viacom’s MTV Networks on Campus, the distribution platform for Viacom’s campus-based service, MTVU – which then became CheddarU. Chegg and Pandora were launch partners, with Chegg collaborating on programming focused on education and study, and Pandora on daily coverage of artists, playlists and music charts.

With the new acquisition, Cheddar gains a user-generated content site that has a strong direct-to-consumer relationship, Cheddar CEO Jon Steinberg tells us.

“We already have a superior model to traditional ad-supported media companies – we are in premium skinny bundles next to CNN and CNBC and focused on live, not page views. Everyone, even NBC is chasing us…but we are one step ahead!,” he said.

Deal terms were not disclosed. Cheddar told Axios it’s on track for nearly $30 million in revenue this year, up from the $25 million it estimated in July.