In April, TechCrunch broke the news that some of Mark Zuckerberg’s Facebook messages were deleted from recipients’ inboxes in what some saw as a violation of user trust and abuse of power since Facebook Messenger doesn’t have an Unsend button. The next morning, Facebook suddenly announced that it would actually build this Unsend functionality for everyone. But six months went by without a peep about the feature, furthering suspicions that the announcement that it would release an Unsend button was merely a PR driven response to the scandal, even if Facebook was just taking time to figure out the right way to build it.

Late last week, TechCrunch asked Facebook about its progress on Unsend ahead of the six month mark, and the company told us “Though we have nothing to announce today, we have previously confirmed that we intend to ship a feature like this and are still planning to do so.”

Now we have our first look at the feature thanks to TechCrunch’s favorite tipster Jane Manchun Wong. She’s managed to generate screenshots of a prototype Unsend button from Facebook Messenger’s Android code. Other Facebook prototypes discovered by Wong like the Your Activity screentime dashboard, Instagram’s video calling and music stickers, and more features have gone on to receive official launches.

Currently, you can only delete messages from your own inbox — they still remain in the recipients’ inbox. But with this Unsend feature prototype, you’re able to remove a message from both sides of a conversation. However, the code indicates that in the current prototype there’s a “time limit”. That may mean users would only have a certain amount of time after they send a message to unsend it. That would essentially be an editing window in which users could take back what they said.

In response, a spokesperson confirmed that “Facebook internally tests products and features before they ship to the public so we can ensure the quality of the experience.” 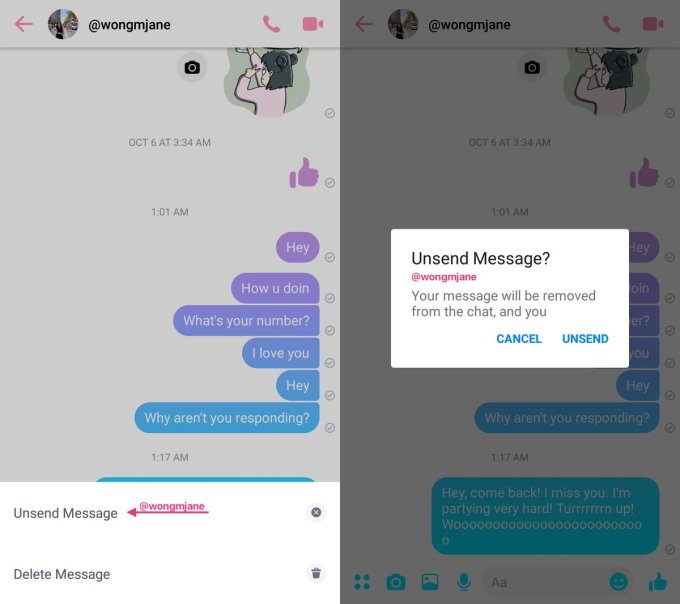 The Unsend feature could be useful to people who say something stupid or inappropriate, disclose a secret they shouldn’t have, or want to erase evidence of their misdeeds. That could make users more comfortable speaking freely on the app, since they know they can retract their texts. Snapchat’s messages self-destruct unless purposefully saved to the thread by a user, permitting more off-the-cuff chatting.

Facebook plans to let everyone unsend messages, will stop Zuckerberg until then

But Unsend could also open vectors for abuse, as users could harass people over Messenger and then delete the evidence. Facebook will need to ensure that Unsend doesn’t accidentally become a weapon for bullies. That might mean allowing users to turn off the ability for their conversation partners to Unsend messages on a thread by thread basis, and/or a report button specifically for flagging messages that have since been retracted.

Facebook’s acquisition Instagram already lets users Unsend messages and Snapchat added an Unsend option in June. But those chat products are more designed for having fun, discussing memes, and sharing photos with close friends. Messenger has positioned itself as a core communications utility for the world. Messing with the permanence of messages could make it feel less reliable or truthful to some users. When we talk in person, our conversations aren’t written in stone forever…but there’s also no way to force someone to forget what you said.

[Postscript: Ideally, Facebook builds this similarly to Gmail’s Undo Send option, where you can only use it for a very short period of time after a message is sent, but still actually deliver messages in real time. The real confusion and trouble would come with being able to unsend messages well after they’ve been sent and even read.]