Mark Zuckerberg’s Facebook messages were retracted from the inboxes of some users, six sources told TechCrunch in April. Facebook quickly tried to normalize that breach of trust by claiming it would in the coming months give everyone the ability to unsend messages. We haven’t heard a word about it since, and Facebook told me it had nothing more to share here today.

Well Snap is stepping up. Snapchat will let you retract your risqué, embarrassing or incriminating messages thanks to a new feature called Clear Chats that’s rolling out globally over the next few weeks.

Hold down on a text, image, video, memory, sticker or audio note in a one-on-one or group chat Snapchat message thread and you’ll see a Delete button. Tap it, and Snapchat will try to retract the message, though it admits it won’t always work if the recipient lacks an internet connection or updated version of the app. The recipient will also be notified… something Facebook didn’t do in the case of Zuckerberg’s messages.

Unfortunately, the Clear Chats option could also be used to send then retract abusive messages, destroying the paper trail. Social media evidence is increasingly being used in divorce and custody battles, which an unsend feature might undermine… especially if Facebook goes through with rolling it out on its platform where messages are normally permanent. But right now, Snapchat’s priority is doing whatever it can to boost usage after hitting its slowest growth rate ever last quarter. If teens feel like Snapchat is a consequence-free place to message, whether or not that’s true, they might favor it over SMS and other social apps.

Snap made a few other announcements today. Spectacles v2, which are actually pretty great and I continue to use, are now available for purchase through Amazon in the U.S., U.K and Canada. The $150 photo- and video-recording sunglasses come to more European countries via Jeff Bezos soon, such as France, Germany, Italy and Spain. Amazon will sell Spectacles in three color combos: Onyx Moonlight, Sapphire Twilight and Ruby Daybreak.

Until now, you could only buy v2 on Snap’s website. That’s because Snapchat’s eagerness to develop a bevy of sales channels made it very tough to forecast demand for its lackluster v1 Spectacles. They only sold 220,000. That led to hundreds of thousands of pairs gathering dust unsold in warehouses, and Snapchat taking an embarrassing $40 million write-off.

“We had an inventory challenge with v1,” Snap’s VP of hardware Mike Randall told me in April. “We don’t think it was a product issue. It was an internal understanding our demand issue versus a planning issue. So we think by having a more simplistic channel strategy with v2 we can more thoughtfully manage demand with v2 versus v1.” Working with Amazon and its robust toolset should help Snap get Spectacles in front of more buyers without obscuring how many it should be manufacturing.

Still, the worst thing about Spectacles is Snapchat. The inability to dump footage directly to your phone’s camera roll, and the incompatibility of its round media format with other social networks, means it’s tough to share your Spectacles content anywhere else while making it look good. Snap has experimented with a traditional landscape export format, but that hasn’t rolled out. Spectacles could strongly benefit from Snap partnering with fellow apps or open sourcing to let others show its circular always-full-screen format in all its glory. 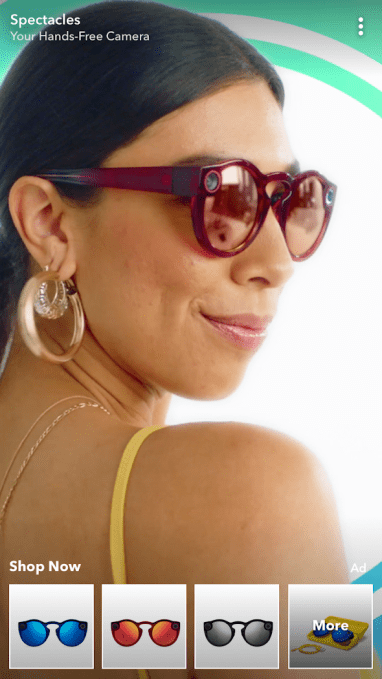 Finally, Snapchat is launching a new e-commerce ad unit that shows a carousel of purchaseable items at the bottom of the screen that users can tap to buy without leaving the Snapchat app. This follows our prediction that Snap launching its own in-app merch store was really the foundation of a bigger e-commerce platform that’s now rolling out.

Merchants can use the Snap Pixel to measure how their ads lead to sales. The ability to shave down the e-commerce conversion funnel could get advertisers spending more on Snapchat when it could use the dollars. Last quarter it lost $385 million and missed its revenue target by $14 million.

Snapchat is also bringing its augmented reality advertisements to its self-serve ad-buying tool. They’re sold on an effective CPM basis for $8 to $20 depending on targeting. Snapchat is also turning its new multiplayer game filters, called Snappables, into ads.

Overall, it’s good to see Snapchat iterating across its software, hardware and business units. Plagued by executive departures, fierce competition from Facebook, a rough recent earnings report and share price troubles, it’s easy to imagine the team getting distracted. The long-term roadmap is fuzzy. With Stories becoming more popular elsewhere, Spectacles sales not being enough to right the ship and Instagram preparing to launch a long-form video hub that competes with Snapchat Discover, Snap needs to figure out its identity. Perhaps that will hinge on some flashy new feature that captures the imagination of the youth. That could be its upcoming Snapkit platform that will let users log into other apps using their Snapchat credentials, bring their Bitmoji, and even use Snap’s AR-equipped software camera within other apps.

But otherwise, it must lock in for a long-haul of efficient and methodical improvement. If it’s not growing, the best it can do is hold on to its core audience and squeeze as many dollars out of them as possible without looking desperate.