GoFundMe, the social fundraising platform that has raised over $5 billion from over 50 million donors for causes, today is taking a big step into fundraising for charities and other non-profit organizations, and specifically helping charities dedicated to adolescent girls in the process. The startup is partnering with former First Lady Michelle Obama and the Obama Foundation to launch the Global Girls Alliance Fund, a platform within GoFundMe designed for fundraising specifically for grassroots organizations that work on girls’ education initiatives.

The new platform is being rolled out as part of a bigger effort that Obama and the Obama Foundation are announcing today called the Global Girls Alliance, a program to empower adolescent girls through education.

Obama has been a strong supporter of the general cause, which — even with the advances we have seen in education and women’s rights — has been a persistent one globally. An estimated 98 million adolescent girls — that is, mostly teenage females of secondary school age — are currently not in school, working out to one out of every five females in this age bracket, according to research from Unesco.

“I’m thrilled to announce the Obama Foundation’s launch of the Global Girls Alliance,” said Obama in a statement. “We want to lift up the grassroots leaders in communities all over the world who are clearing away the hurdles that too many girls face. Because the evidence is clear: educating girls isn’t just good for the girls, it’s good for all of us.”

The Fund is designed to be the a way for girls’ education charities to get donations through crowdsourcing, alongside whatever other routes they are using to raise money, whether it be through other fundraising efforts, via NGOs or other support.

Crowdfunding of the sort that has been built out by groups like GoFundMe provides a degree of transparency to donors beyond what they might have traditionally seen when making donations to charities. Donors can see who else is contributing money, and how much; and the organizations can provide more details about their progress and how they are using the money.

These organizations could have, of course, always gone directly to GoFundMe (or indeed other causes-oriented crowdfunding sites, such as Facebook or others), and some might already have done so.

The benefit of the Global Girls Alliance Fund is that it gives these causes a degree of economy of scale: together they have more visibility and virality potential (campaigns going viral being a major component of why they can do so well on these platforms). With the Obama machine behind it, they might get more firepower too by way of the Obama Foundation’s own outreach efforts. A single girls’ education charity may never find its way to the Today Show — a very popular breakfast show in the US — but Michelle Obama has. She’s announcing the news today on the program, to coincide with the International Day of the Girl.

GoFundMe has set up the Funding site so that people who are interested in giving money to the cause can donate either to a general GGA Fund, or to a specific grassroots project, which will be listed on the landing page. It’s kicking off with six funding options, five projects and the general GGA Fund, and more will be added and changed over time. 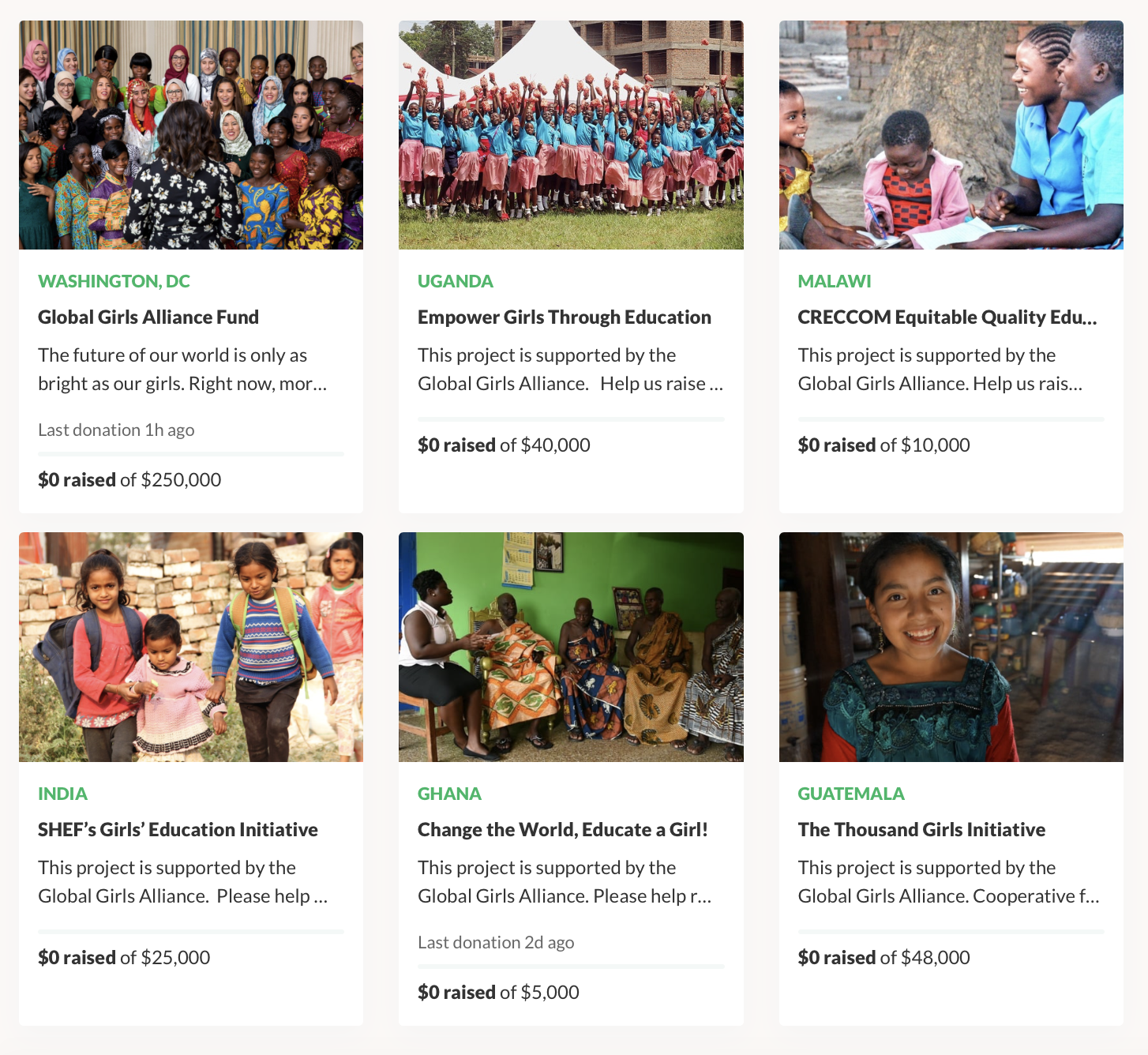 This is breaking new ground for GoFundMe in a couple of ways. For starters, this is the first time that GoFundMe has worked with a foundation to essentially provide a micro-site of sorts for funding a specific subset of charities around a single cause. GoFundMe’s work with charities versus individuals is a relatively new chapter for the startup — it really moved into the field in earnest in March this year after it integrated and relaunched CrowdRise, a charity-focused fundraising startup that it had acquired in 2017.

It’s also a new step ahead for GoFundMe in terms of how it works with organizations globally. Some of the groups that are falling under the Global Girls Alliance are coming from developing countries. Payments globally is a very fragmented space, and different countries have their own preferred methods for paying, and for drawing down funds people pay for goods and services. That situation is compounded in developing countries by the fact that is a high proportion of people who are “unbanked” — that is, without bank accounts, without payment cards, and without credit histories — three of the basic fundamentals that you need to make payments in developed countries.

That has meant that GoFundMe will be integrating with a wider variety of payment solutions globally in order to enable them to use its platform, both to raise money from the widest number of people, and to be able to eventually draw down and use funds. We’ve asked for GoFundMe to provide more details of who it’s working with on this front and will update as we learn more. For now, it looks like anyone with a credit card can join and donate to the Global Girls Alliance, and it will be interesting to see how and if they extend that to people without credit cards. (There are services like M-Pesa in Kenya that have bypassed traditional card infrastructure, and so alternatives do indeed exist.)

Hopefully, the transparency of fundraising on GoFundMe will also let us stay up to date on this initiative to see how it develops and if it and the Obama Foundation can pull it off. On a more personal note, I do hope it does.