If you ever wanted to use your Google Assistant to book a ride with Uber or Lyft, your wishes have been heard. Starting today, you’ll be able to use your voice to ask Google’s virtual assistant to book you a car from Uber, Lyft, Ola, Grab, GO-JEK and similar services.

The new feature works with Google Assistant-enabled speakers and on phones. You can either request a car from a specific company or place a more generic request (“Hey Google, book a car to PDX”) and the assistant will return current pricing for all the supported ridesharing services in your area. 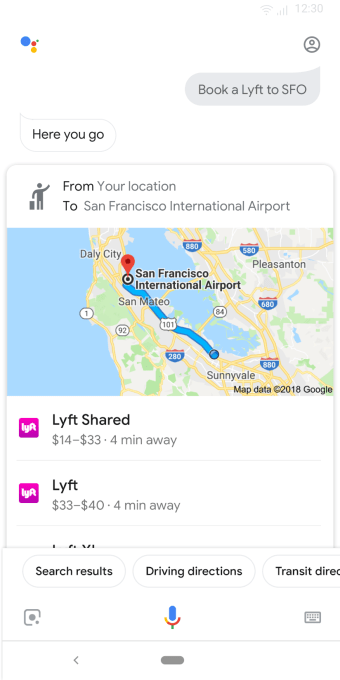 To actually book the ride, Assistant will then hand you off to the ridesharing company’s mobile app.

Still, it’s a useful feature if you want to quickly compare prices or are frantically running around the house, trying to pack your suitcase for your next trip and want to get a car quickly.

“We think of the Google Assistant as highlighting the best of Google,” she said. “There is a ridesharing feature in Google Maps and we’ve been working very closely with that team to highlight this.”

It’s worth noting that Google announced a redesign of the visual side of the Google Assistant yesterday. This new feature isn’t directly linked to that as far as I can tell, but it does show some of that same focus on bringing more visual elements to the Assistant experience by showing you a list of prices and a map.

The new feature is now rolling out globally, but only in English. It’ll expand to other languages over time.