Compass, the New York startup that has built a tech-first platform to take on the antiquated market of real estate, is building up its own house today. To double down on domestic growth, build out its tech, and to finally open up for business outside the US, the company has raised another $400 million of funding.

Jointly led by SoftBank’s Vision Fund and the Qatar Investment Authority, this Series F — likely to be the last before it goes public — now values Compass at a whopping $4.4 billion.

(Other investors in this round include Wellington, IVP and Fidelity, with the total raised by Compass now at $1.2 billion to date.)

Compass has been on nothing less than a funding roll. (Part of a wider one for the real estate startup market: today SoftBank also led a $400 million round into Opendoor, and last week Zumper raised $46 million.)

Compass’s money comes on the heels of the startup raising $450 million less than a year ago at a $2.2 billion valuation, also led by the Vision Fund, and picking up $100 million just before that, totalling $900 million for this year.

These sums underscore just how far and fast the company has leaped since first being founded as Urban Compass in 2012. Indeed, while the real estate market has had its ups and downs, you could argue that Compass has been witnessing a boom of its own.

The company cleared $34 billion in sales in 2018 ($14.8 billion in 2017) and is on track to make $1 billion in revenues. It already claims to be the biggest independent brokerage in California. This, it should be said, was partly due to inorganic growth: it acquired Pacific Union International in August, and although Compass doesn’t rule out more M&A, this will never replace organic growth, according to Ori Allon, the co-founder (with CEO Robert Reffkin) and executive chairman of the startup. 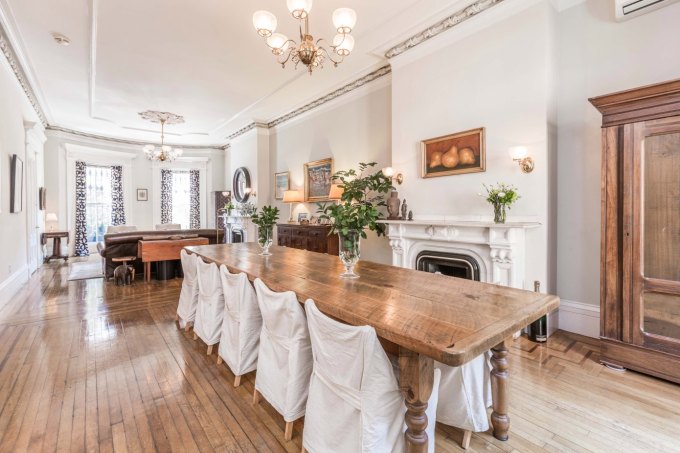 Allon would not say whether Compass is currently profitable, but it sounds like an intentional no. “We are in a strong financial position and continue to heavily invest in growth,” Allon — a search engineer himself who previously sold companies to Google and Twitter — said in an interview.

Compass at its most basic offers a clear and easy way for property owners to list, market and sell properties, as well as follow through on the many pieces of complex transactional data that occur before and after the deal is made. But it has also built its business in a quite traditional way, too: by adding people.

The company says it now has more than 7,000 agents on the ground, triple the number it had in 2017, and is on track with a strategy to control 20 percent of all residential property sales in the US’s top 20 markets. (In addition to big cities like New York, Washington, Boston and San Francisco, it’s been expanding into the next wave of markets, including San Diego, Dallas, Seattle, Philadelphia and Atlanta, and soon Austin, Nashville and Houston).

In Allon’s view, the tech and human elements are essentially two sides to the same coin.

“We are continuing to build an end-to-end technology platform that services agents and their clients through every step of the real estate journey,” Allon said. “This is why so many agents make the transition to Compass. Our vision is for Compass to be everywhere, and we are excited to expand internationally in 2019.”

Compass is not the only company trying to disrupt (and improve) real estate with tech. In addition to the now-established guard of sites like Redfin and Zillow that aggregate listings and provide a way to view properties from a range of agencies, there are startups like Zumper looking to tackle the rental market.

“We’re all trying to make the whole ecosystem better, but are focusing on fundamentally different parts of the ecosystem,” Allon said of Zumper (which itself raised a round just last week). “It’s great to see other companies investing in innovation for the real estate industry. Our industry will be better for the changes these companies are making and it will prepare us all to thrive for many years to come.”

That’s not to say that Zumper — and others — might not one day become more direct competition. “Our goal is to eventually service all aspects of real estate, ultimately creating a single platform for the industry, with agents at the center of the referral economy,” Allon said in response to a question of whether it would tackle more short-term lettings a la Airbnb. This would be a market you could imagine might be interesting, given how many property investors specifically buy to rent out the spaces.

The Adyen of real estate?

There is an interesting trend in the tech world of businesses that are tackling what some would describe as “unsexy” problems: in many industries, there are too many pieces that need to work together to get something done, and this slows down not only the overall industry’s growth, but how smaller players can engage and use it. Adyen has built a solution to tie up and simplify working with the many moving parts of the payments space, and it seems that this too is what Compass wants to build for the real estate industry.

“As we build new tech and tools, our goal is seamless integration — of our tech, tools and backend data,” Allon said. “There is not one company that has seamlessly integrated the real estate journey for agents or consumers on an end-to-end platform. Our current focus is on creating a seamless experience that allows agents to complete daily tasks more intelligently, which will eventually extend beyond close, to title, insurance, mortgage, escrow, and more.”

In terms of investors, Allon describes SoftBank as “an incredible partner” — not least, I’m guessing, because it has been so willing to back Compass (twice!). Notably, he said that Compass is in a position where it didn’t need to raise — words that must be some of the most welcome ones that any investor hears as the term sheets are drawn up — but “this latest round of funding gets us steps closer, faster.”

“Compass’s continued growth is being driven by their commitment to empowering agents with best-in-class technology that helps them expand their business and better serve consumers,” said Justin Wilson, SoftBank Investment Adviser’s board representative. “We’re excited to continue to support Compass as they further invest in their data and technology capabilities to create a next generation platform for home transactions and ownership.”

QIA, meanwhile, is an interesting and likely strategic investor, given its holdings also in real estate globally. (It’s a very prominent player in my town of London, for example, with stakes or full ownership of some of the city’s most iconic properties.)

“We believe Compass is well positioned in the real estate brokerage sector driven by technology. We look forward to partnering with Compass and existing shareholders in the next stage of the company’s growth. Our investment marks QIA’s ongoing commitment to investing in high quality technology, media and telecommunications assets.” said a spokesperson for the QIA, in a statement.