Coinbase is shaking things up quite a bit lately and its latest tools are geared toward cryptocurrency traders just getting their toes wet.

On Thursday, the company announced that it would add a feature called Coinbase Bundle. The new offering lets users purchase a market-weighted sampling of Coinbase’s five available cryptocurrencies: Bitcoin, Ethereum, Bitcoin Cash, Litecoin and Ethereum Classic. The idea is that a bundle of coins offers users a starter pack for cryptocurrency trading on the platform with stakes of their choosing. In reality, until Coinbase adds more coins, it’s not exactly a diversified portfolio so much as a slightly counterbalanced selection of Coinbase’s current limited offerings.

In June, Coinbase introduced index funds targeted toward institutional investors in the U.S. While those funds required an investment between $250,000 and $20 million, Coinbase Bundle is geared toward the casual individual investor with bundles that start at $25. For beginning traders that prefer to follow rather than beat the market, betting on broad growth over time, a product like Coinbase Bundle makes sense. Or rather it will when Coinbase adds a lot more coins.

Users who buy a Coinbase Bundle can expect to see the funds appear in their wallet like normal. There, the funds will behave like separate assets that can be sold and sent elsewhere.

Beyond bundles, Coinbase is also launching a few educational cryptocurrency tools geared toward anyone still learning the ropes. The first of those tools is Coinbase Asset Pages, the company’s own CoinMarketCap-like database where anyone can view details about the top 50 coins by market cap, whether they’re listed by Coinbase or not. 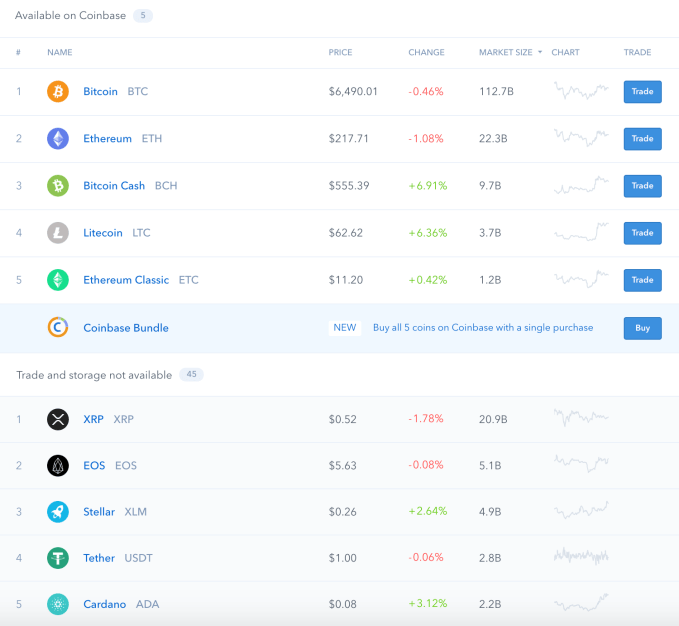 Coinbase is also launching a dedicated learning hub on its site where new users can browse topics like “What is blockchain?” and “Where do cryptocurrencies get their value?” — in many cases, a good question. Given Coinbase’s appeal to brand-new users, it’s kind of surprising that this didn’t already exist. Particularly that it wasn’t implemented late last year when many wide-eyed investors bought it at all-time highs and were handed big losses in the months to come. 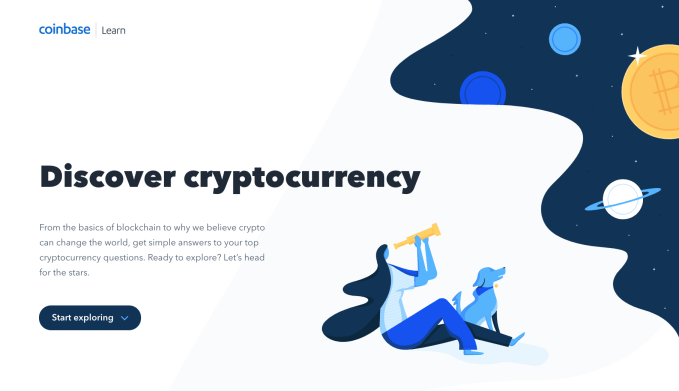 After mainstream interest in digital currencies cooled from the fever-dream highs of late 2017, making Coinbase’s famously user-friendly entry point into the cryptocurrency world even more approachable for first-time buyers, if many remain, can’t hurt. The company is also clearly readying for its plan to list coins well beyond its current limited offerings, a transformation that will see the platform evolve from its historical identity as a blue chip stock shop to something more akin to digital currency’s attractive, well-lit corner store.

Coinbase’s new top 50 asset pages and learning hub are live now. Coinbase Bundles, limited to the U.S. and Europe, will start showing up for users today, and the rollout will continue through the next few weeks.