Google is rolling back its ban on cryptocurrency advertisements – following a similar move made by Facebook earlier this summer, CNBC reports. Google in March was among the first of the major platforms to announce it would no longer run ban cryptocurrency ads, due to an abundance of caution around an industry where there’s so much potential for consumer harm.

But Facebook moved away from its blanket ban this June, when it said it would no longer ban all cryptocurrency ads, but would rather allow those from “pre-approved advertisers” instead. It excluded ads that promoted binary options and initial coin offerings (ICOs), however.

Google is now following suit with its own policy change. The update was announced today, we’ve confirmed. 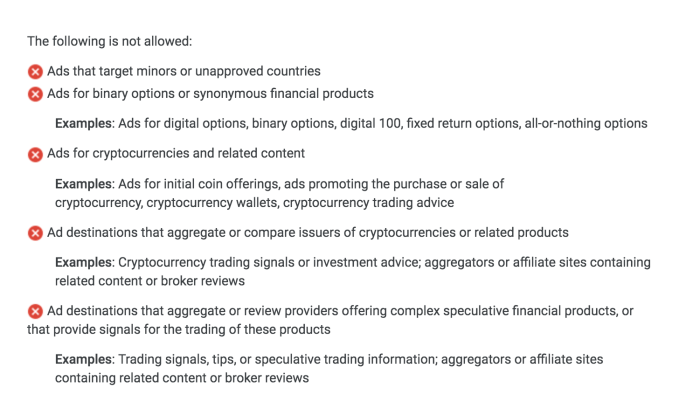 But the October 2018 policy update says that “regulated cryptocurrency exchanges” will be allowed to advertise in the U.S. and Japan.

To do so, advertisers will have to be certified with Google for the specific country where their ads will run, a process that begins in October. The policy will apply to all accounts that advertise these types of financial products, Google says.

Banning cryptocurrency ads on the part of the major platforms was a good step in terms of consumer protection, due to the amount of fraud and spam in the industry. According to the FTC, consumers lost $532 million to cryptocurrency-related scams in the first two months of 2018. An agency official also warned that consumers could lose more than $3 billion by the end of the year, because of these problems.

But for ad-dependent platforms like Facebook and Google, there’s so much money to be made here. It’s clear they wanted to find a way to let some of these advertisers back in. Google parent Alphabet makes around 86% of its total revenue from ads, CNBC noted, and booked over $54 billion in ad revenue in the first half of the year.