Maria Smith, Facebook’s director of product for the news feed and media monetization, noted that Facebook first started testing these ad units more than a year ago.

“We started very conservatively,” she said. “It’s a very new initiative for us … We needed to get the user experience right.”

In particular, she said the company found that that these ads work best with longer videos, which is why there’s now a minimum length of three minutes.

Facebook has rolled out other improvements too, like the ability to automatically detect the best moments to insert the ad (though video publishers can still place the Ad Breaks manually, if they choose).

“As you watch a video, there are points in this video where the pause or Ad Break feels natural to the viewer,” Smith said. “For example, between scenes, or where it doesn’t interrupt speech, where the story line feels good to take a break — those are all signals” used to select Ad Break locations. 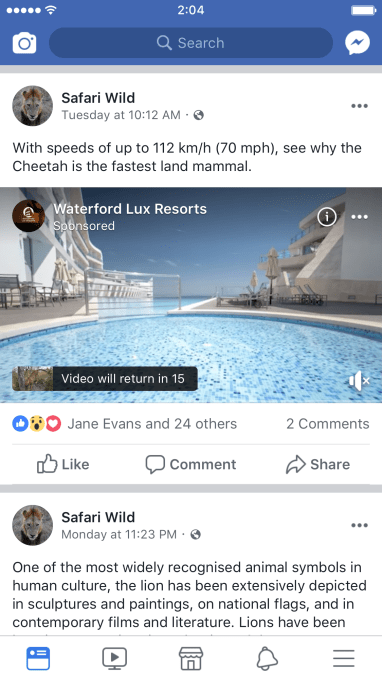 Beyond the minimum length for individual videos, Facebook also requires that Pages participating in the Ad Breaks program have at least 10,000 followers and need to have received at least 30,000 one-minute views on videos that are at least one minute long. They also need to meet Facebook’s general monetization standards.

The Ad Breaks sign-up page will now automatically tell creators whether they’re eligible to participate. Smith described these standards as a way to ensure “a really positive experience” for video creators, advertisers and regular users. (After concerns that ads were being played before inappropriate or controversial content, YouTube set a higher bar for eligibility earlier this year, though that’s led to widespread complaints from creators.)

“We’re making sure we’re very thoughtful, rolling this out in phases,” Smith said. “As we get ready to honor our commitment to our partners to enable them to monetize, we’re very excited.”