Facebook today announced it has begun testing ad breaks that interrupt on-demand video, using a small set of partners who will earn a 55 percent ad revenue share while Facebook keeps 45 percent. That could change the way creators make video content so they tease viewers enough to sit through the ads, while luring more producers to Facebook.

On-demand video publishers will get to select where in their video they want to insert an ad break, but it must be at least 20 seconds in and at least 2 minutes apart. Recode reported last month that ad breaks were coming.

Facebook’s Audience Network for showing ads in other apps now lets all publishers host in-stream video ads, after testing them this year. 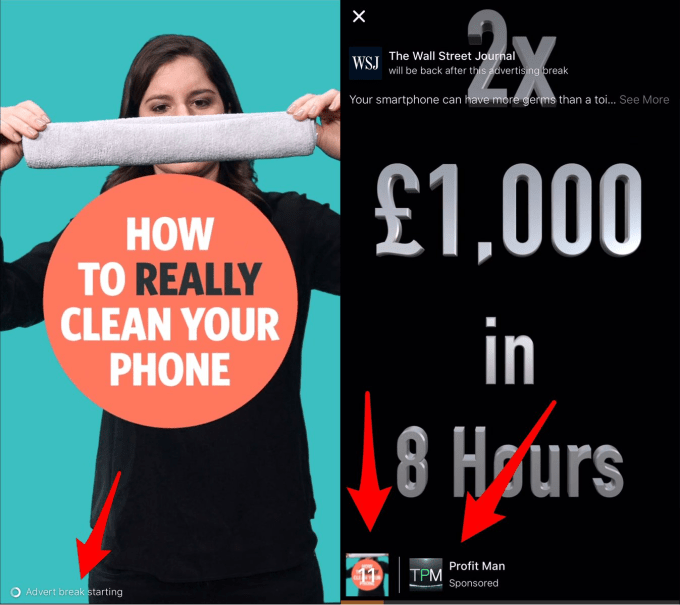 Here’s what two of Facebook’s video ad breaks look like, via Matt Navarra

Facebook is also expanding its existing test of ad breaks in Live videos that it announced in August. Now Pages and profiles in the U.S. that have at least 2,000 followers and reached at least 300 concurrent viewers in one of their recent Live videos are eligible to insert ad breaks.

After at least 4 minutes of broadcasting to at least 300 concurrent viewers, they’ll see a “You can take an ad break” money sign alert alongside real-time comments on their video. Tapping that initiates an ad break up to 20 seconds, and creators can take more ad breaks every 5 minutes.

Ad breaks could actually make it easier for Live creators to be on camera, because if they need to take a quick breather, adjust their hair or switch settings, they can do it off camera. The ad breaks can include vertical video, a further sign of Facebook invading Snapchat’s domain.

And Facebook’s plan takes all the work out of monetization, because its team handles all the ad sales and accounting. Outside of big news and entertainment publishers, many of the web’s top video creators are teens and young adults shooting from their bedrooms and desperate to turn their hobby into a profession.

That’s why YouTube, which pays them, has been the clubhouse for these videographers. Now they have good reason to put their content on Facebook beyond the virality, even if it cannibalizes their YouTube view counts. And Facebook’s ad breaks might lure Live broadcasters away from competitor Periscope, which has only begun doing big sponsorship deals with celebrities. Facebook was already doing one-off deals with big publishers to get them using Live, but now Facebook’s incentive system is available to a much wider range of broadcasters.

Previously, Facebook only showed video ads as either related videos after you watched one purposefully, or as distinct ad units in the feed. Now it can earn cash directly from the more than 100 million hours of video people watch on its platform, and that stat was from a year ago, before Facebook’s continued rise as a video host. Facebook video consumption could also rise beyond its home on mobile with the company’s launch of video viewing apps for TV set-top boxes, though for now it’s not showing ads there.

The big concern here, though, is that video makers will purposefully delay the best parts of videos until after ad breaks, making them much less watchable. Currently, creators try to cram the flashiest moments of their content in the first few seconds to catch people’s eyes while they’re scrolling the feed, giving people what they want up front.

Now creators might instead use the first 20 seconds of videos to build suspense to a cliffhanger, insert an ad break and then put the meat of the video after they’ve already earned their cut. Along with the switch from videos autplaying silently to having sound on by default, the whole Facebook video creation playbook will have to change.

Facebook’s VP of partnerships Nick Grudin tells TechCrunch, “Whether on Facebook or off, we’re committed to continuing to work with our partners to develop new monetization products and ad formats for digital video. It’s early days, but today’s updates are a step towards this goal.”

Together, these initiatives could let Facebook further boost the cash it earns from the same amount of News Feed space. If Facebook can lure the best content onto its platform, users will end up sitting through more lucrative ads than if they were just scrolling past photo ads in the feed.