Designing for digital interfaces has come a long way since the first days of the web, but there remains a place for tech that can help navigate us through what are sometimes still bloated or complicated services (notwithstanding those that are deliberately so). Today, one of the more successful startups working in this area has raised a sizeable round that speaks to the opportunity.

WalkMe — the Israel-based provider of tools that companies and organizations plug into their own apps to help guide people in using them more efficiently — has closed $40 million in funding in a Series F round led by Insight Venture Partners, with participation also from previous investor Mangrove.

WalkMe is not disclosing its valuation, but a source very close to the company confirmed to me that it is now over $1 billion as business continues to “grow rapidly.” WalkMe now has 2,000 customers globally, which includes more than 30 percent of the Fortune 500, including Delta, HP (CEO and co-founder Dan Adika is an alum), T-Mobile and Microsoft (no Clippy jokes, please).

The money — which brings the total raised to $207.5 million — will be used to expand its business further into local markets in Europe and Asia Pacific, and also continue to build out its platform. Today, that platform includes elements of machine learning and big data analytics along with technologies to read, understand, and guide through user interfaces — a tech stack that has grown through a combination of internal development and acquisitions. 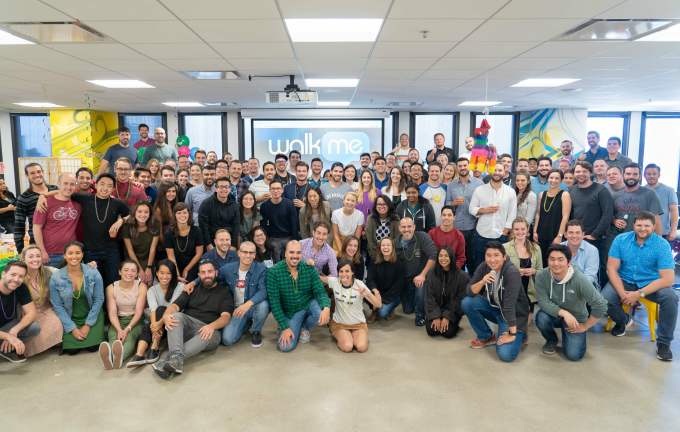 When it was founded in 2011, WalkMe’s focus was primarily on providing help to website visitors, to keep them from bouncing away in frustration. Over time, it expanded to other areas. Its remit now also includes B2B, since in many cases an organization’s internal teams can be just as confused or frustrated with its tech services as external customers might be, and that impacts overall productivity. (Consider employee on-boarding, or change management, or the fact that we have multiple services, sometimes as much as 20 different systems, that we need to use daily.)

WalkMe is also doing more in automation, helping fill in information and proceed through other steps to speed up usage, or as Rephael Sweary, the president and other co-founder of the company, describes it, “reducing the steps it takes to do something on a site from 10 to three.” Sweary said that WalkMe’s business is roughly split equally between B2B and B2B2C today, with 40 percent of sales to repeat customers.

Perhaps the best measure of a service that helps you use other services better is if the helping service disappears into the background and becomes a bit invisible. That seems to be something of the modus operandi of WalkMe, which even as a startup lacks much of a profile, especially considering its valuation now.

That carries through to the services that WalkMe provides as a business. Much of its business is “white label”, in that there is no WalkMe branding anywhere, and the aim is to make the assistants it creates, to help people through user interfaces, as unnoticeable as possible. In fact, the most you might get about WalkMe’s presence on a site, is in Europe, where it will be listed along with other services, in a GDPR-related information splash among other services that a site might use to help optimise performance. Sweary says that WalkMe is completely GDPR compliant itself.

Another part of its work is dedicated to observing how interfaces are being used, employing machine learning and big data analytics technology to figure out not just what people are doing, but how to improve it.

It’s this shift to developing services that will help shape how services are built that is an interesting direction for WalkMe, which has up to now nearly profited off the fact that sites and other digital interfaces have not been designed well.

WalkMe’s most recent acquisition, in June, was of a stealth startup called DeepUI, which uses deep learning analytics around a site’s graphical user interface to understand how sites are used without integrating with a site’s APIs. “DeepUI’s algorithms can anticipate individual user’s needs, automatically create customized step-by-step guidance and complete tasks in the quickest and most efficient way possible,” WalkMe said at the time it announced the deal.

“This will save organizations countless hours of time in building, maintaining and managing instructions, workflows, or other engagement processes for users on any platform.”

That longer-term vision of how WalkMe plans to evolve is what has excited investors in this round, alongside the growth of its existing business.

“WalkMe pioneered and developed the digital adoption platform, with a bold vision of transforming the way users interact with technology, just like navigation systems (GPS) changed the way we drive. With WalkMe, users no longer need to learn or recall how to use any software, application or websites,” said Roy Saar, partner at Mangrove Capital Partners, in a statement. “Although we are traditionally an early stage investor, we decided to take part in WalkMe’s growth round because we are witnessing how more and more of WalkMe’s customers see WalkMe as a strategic enabler of their digital transformation. We look forward to continuing our partnership with WalkMe as they continue to revolutionize the future of work.”