The European Union’s competition commission is looking into how Amazon uses data from retailers selling via its ecommerce marketplace, Reuters reports.

Competition commissioner Margrethe Vestager revealed the action today during a press conference. “We are gathering information on the issue and we have sent quite a number of questionnaires to market participants in order to understand this issue in full,” she said.

It’s not a formal antitrust probe at this stage, with Vestager also telling reporters: “These are very early days… we haven’t formally opened a case. But we are trying to make sure that we get the full picture.”

The Commission appears to be trying to determine whether or not third-party merchants selling on Amazon’s platform are being placed at a disadvantage vs the products Amazon also sells, thereby competing directly with some of its marketplace participants.

“You have these platforms that have sort of dual purpose, they are both hosting a lot of merchants to enable maybe the smaller guy to have his business, to be found, to do his commerce, and at the same time thgey themselves are merchants — big merchants. So they’re both hosts and they also do the merchant business themselves. And the question here is the about the data,” Vestager also said.

“Because if you as Amazon get the data from the smaller merchants that you host which can be of course completely legitimate because you can improve your service to these smaller merchants. Well, do you then also use these data to do your own calculations? As to what is the new big thing? What is it that people want? What kind of offers do they like to receive? What makes them buy things? And that has made us start a preliminary… antitrust investigation into Amazon’s business practices.” 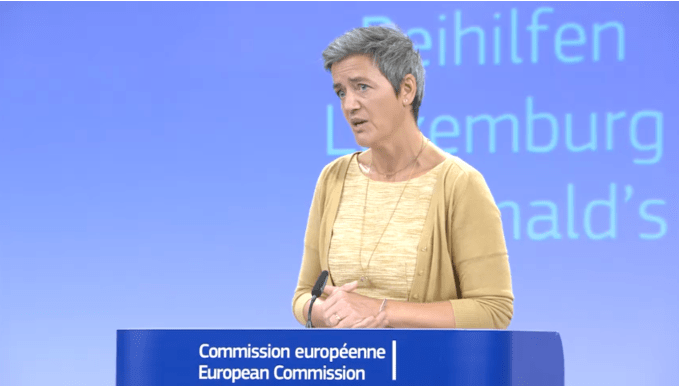 Companies found to be in breach of EU antitrust rules can be fined up to 10 per cent of their global annual turnover.

In recent years the ecommerce giant has greatly expanded the own-brand products it sells via its marketplace, such as via its Amazon Elements line, which includes vitamin supplements and baby wipes, and AmazonBasics — which covers a wide array of ‘everyday’ items including batteries and even towels.

The company does not always brand its own-brand products with the Amazon label, also operating a raft of additional own brands — including for kids clothes, women’s fashion, sportswear, home furnishings and most recently diapers, to name a few. So it is not always immediately transparent to shoppers on its marketplace when they are buying something produced by Amazon itself.

Meanwhile, tech giants’ grip on big data has been flagged as a potential antitrust concern by Vestager for several years now.

In a speech at the DLD conference back in 2016 she said: “If a company’s use of data is so bad for competition that it outweighs the benefits, we may have to step in to restore a level playing field,” adding then that she was continuing to “look carefully at this issue”.

It’s not clear how the Amazon probe will pan out but it signifies a stepping up of the Commission’s action in this area.

The EU also issued Google with a recordbreaking $5BN fine this summer, for abusing the dominance of its Android mobile operating system.

That fine followed another recordbreaking penalty in 2017, when Google was slapped with an $2.7BN antitrust fine related to its search comparison service, Google Shopping.

Google is appealing against both rulings.