Last November, Amazon quietly re-entered the diapers market with the launch of its own private label diapers under the Mama Bear brand – its first diaper brand since pulling its Amazon Elements line back in January 2015. Now, Amazon has added a new, exclusive premium diapers brand, this time under the new name of Earth + Eden. Unlike Mama Bear, which is the Amazon equivalent to something like Pampers, Amazon’s Earth + Eden appears to be more of a competitor to premium diapers, like those sold on Honest.com.

The Honest Company touts its diapers’ super-soft, safe, gentle, hypoallergenic, and most importantly, sustainably-sourced materials, as does the Earth + Eden diapers’ product page.

The Amazon diapers are described as:

Cruelty free – not tested on animals; Made with SFI Certified sustainably sourced fluff; Printed with non-toxic water-based inks; Produced in a Zero Waste to Landfill Facility

In the Q&A section of the product page and in the images, the manufacturer also notes other “green” choices it made – like how the diapers are “free from harsh chemicals,” have “no lotions, parabens, fragrance, latex, or chlorine bleaching,” and use “non-toxic, water based inks.” 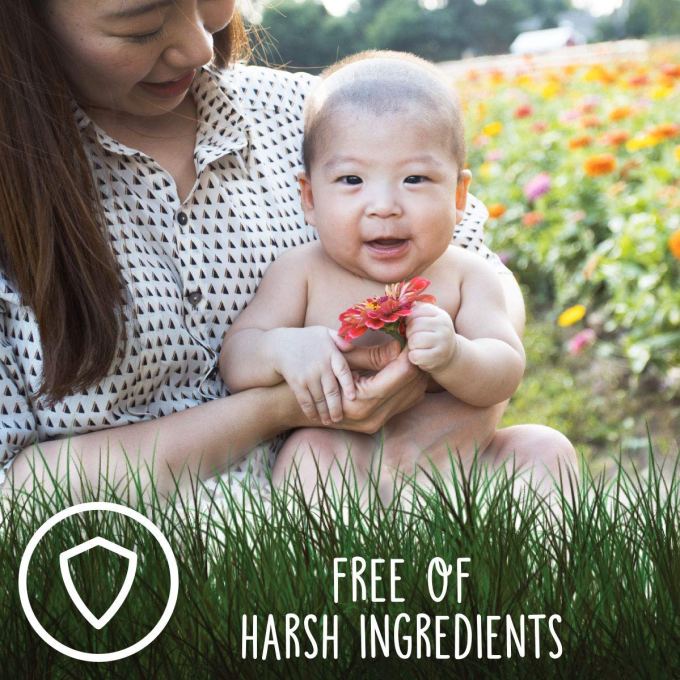 The product images themselves also have an eco vibe to them with photos of babies in green grass fields, or mothers cuddling little ones with flowers and trees all around them.

Also like Honest.com’s diapers, the Earth + Eden diapers come in prints instead of just plain white. However, its print is not all over the diaper as with Honest’s diapers – just a band at the top. (And frankly, Earth + Eden’s prints are a little boring by comparison.)

But the new diapers may not be competing so much on looks, as they are on price.

The diapers range in price from $0.21 each (size 1) to $0.51 each (size 7), which puts them more in line with a mainstream disposable diaper brands, like Luvs, Huggies or Pampers – not premium diapers like Honest or Pampers Pure, for example.

The website This Just In was first to spot the diapers’ launch, and notes that the manufacturer identifies themselves as by “First Quality Enterprises” of Great Neck, N.Y.

Multiple sources initially told TechCrunch the diapers were a new private label. In addition, the listing for the Earth + Eden diapers shows up under a heading entitled “Our Brands” when shoppers search for baby diapers on Amazon’s site. (See photo below)

However, Amazon said that this is not an “Amazon” brand – it’s a new exclusive brand to Amazon. 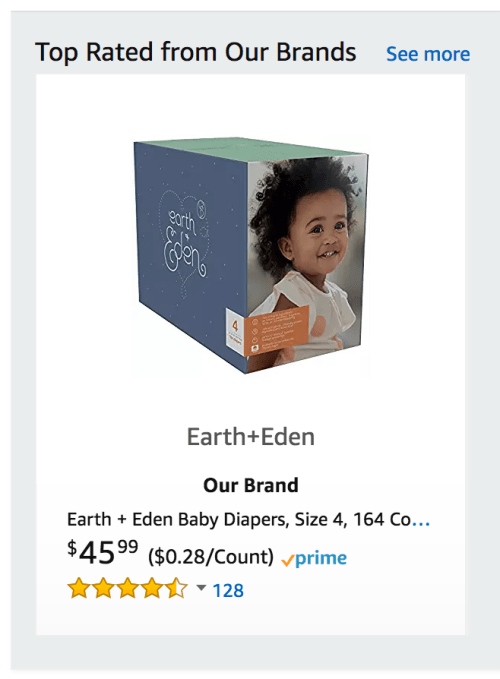 Amazon explains that despite listing the product (as pictured above) as “Our Brand” that doesn’t mean it’s an Amazon brand. Instead, the company tells us it will refer to things that are manufactured by others but made exclusive to Amazon as “Our Brand,” as well.

That seems a bit misleading – the text should probably read “Amazon Exclusive,” in that case.

The new diapers arrived on Amazon in July, we’re told. Amazon Some customers received them for free through Amazon Vine, the retailer’s own program that connects manufacturers to trusted reviewers.

Diapers are a huge business, but one where Amazon could still do better.

While its Amazon Elements line of wipes had achieved a 14% market share as of the time the Mama Bear brand of diapers launched last November, those same diapers are currently the #46 best-seller in their category.

In addition, Amazon last year exited its Quidsi business, whose flagship property was Diapers.com. That URL now redirects to a landing page on Amazon.com, where baby products are listed. (The Earth + Eden brand appears on this page, as well, when you click on the link to view the diapers.)

The Honest Company now has its own Amazon storefront where shoppers can buy its diapers, overnight pants, lotions, shampoos, and other personal care products. The storefront was launched last year, as part of the business’ larger shift from e-commerce to omnichannel.

Update, 9/17/18, 5:30 pm et: Post updated shortly after publication, as Amazon reached out to clarify the brand is a new exclusive product to Amazon.com, but is not a private label. See above text in bold for details.