Instagram is testing a way to allow users to tag their friends in their video posts, not just in photos, TechCrunch has learned and the company confirmed. The option works similarly to tagging photos, but instead of pressing the small icon at the bottom left to see the list of tagged names appear over top of the content – something that would be more difficult with videos – the button links to a list of tagged people.

When you tap this button, you’re directed to a new page titled “People in this Video” with all the Instagram users who have either appeared in the video, or who the original poster wants to alert in some way.

As far as we can tell, these videos don’t also copy over to the tagged users’ profiles, where tagged photos typically appear today. But that could come further down the road.

Video tagging is also not appearing on the web version of Instagram at present, only on mobile.

Instagram didn’t want to share much information about the test, nor discuss its plans for a larger rollout of the feature – which is currently unsupported for anyone who hasn’t been opted in to the test by the company.

However, it would say that the experiment is underway right now with a “small percentage” of Instagram’s users.

“We’re always testing ways to improve the experience on Instagram and bring you closer to the people and things you love,” a spokesperson confirmed, in a statement. 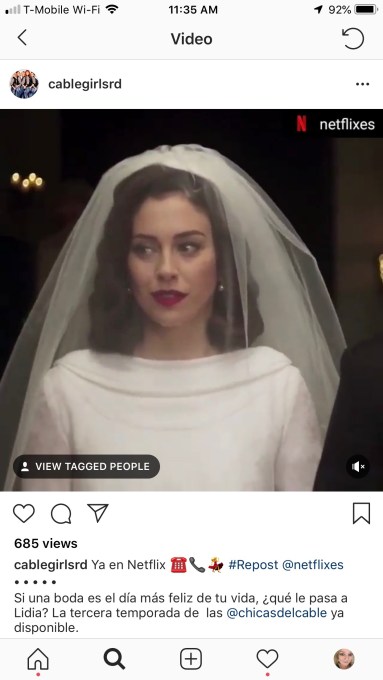 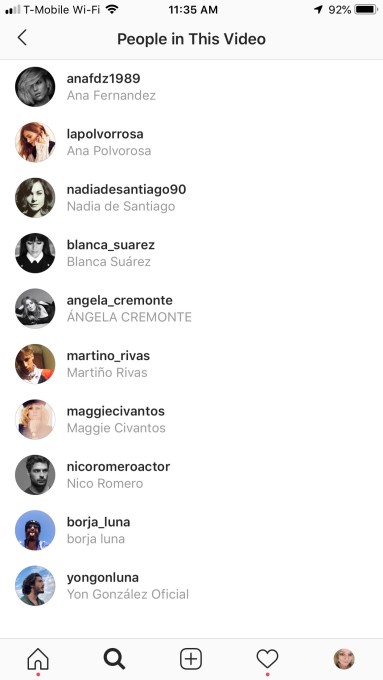 Instagram has offered photo tagging since 2013, and later rolled out support for things like tagging products and tagging friends in Stories. But although video sharing arrived on the platform in June 2013, Instagram has yet to introduce a way for users to properly tag their friends. Rather, its FAQ suggests that users should mention friends in a comment so they’ll get a notification.

That may have been sufficient for some time, but video is a more critical aspect to Instagram’s platform these days, especially as it explores how to enable better video discovery through its user interface, direct people to its newest product, IGTV, and connect larger groups together in video chat sessions.

Tagging videos, then is an obvious, if long past due, next step – and one that can drive increased engagement as the tagged users relaunch the app following their notifications.

The feature could also make way for shoppable videos, not just photos, and allow Instagram influencers to post videos of their favorite products and places, while pointing fans to those brands’ own Instagram accounts in a more structured fashion than is possible today.