Smart speaker ownership continues to grow, according to new research from Adobe Analytics out this morning. The company found that as of August 2018, 32% of consumers now own a smart speaker, up from 28% in January. That’s a 14% increase in just a matter of months – and those months didn’t include the busy holiday sales season, where 79% of smart speaker sales occur.

In addition, the firm is predicting that after the 2018 holidays, nearly half (48%) of U.S. consumers will own a smart speaker. 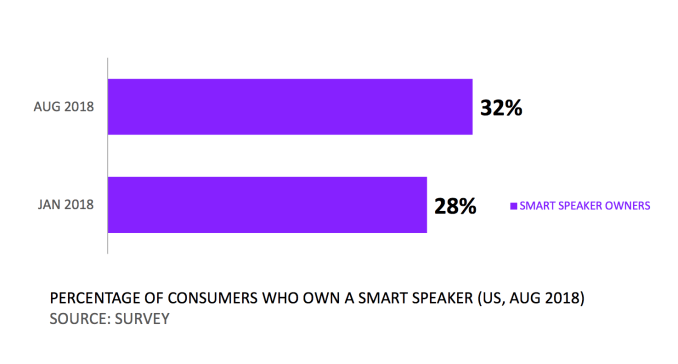 Adobe’s research is based of a survey of 1,000 U.S. consumers, and also delved into other aspects of smart speaker usage and voice computing.

For example, the most common voice activities today are asking for music (70%) and the weather forecast (64%). 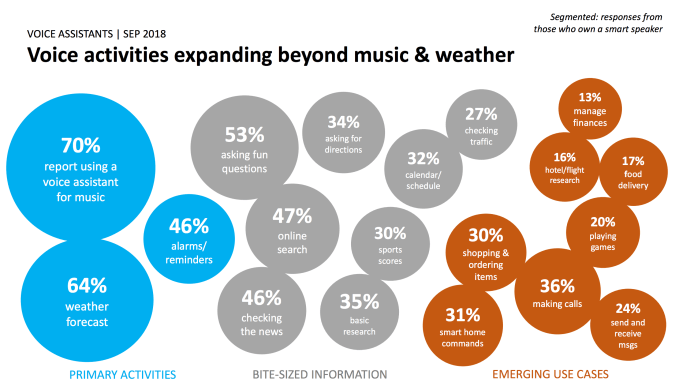 However, controlling the smart home using voice commands was only used by 31% of device owners, despite smart home controls being a key feature of these newer devices.

The study also somewhat contradicted an earlier report by The Information which said that only 2% of Alexa owners made a purchase using their voice. Though Adobe’s research looked at the overall smart speaker market in the U.S., not just Alexa devices, it didn’t find the same trend. Instead, it found that 30% of smart speaker owners used the devices for “shopping or ordering items.”

While not one of the top voice activities, it’s an activity Adobe pegged as an “emerging use case,” along with others like food delivery, sending messages, play games, smart home commands, travel research and managing finances.

But Adobe clarified its findings around voice shopping, saying that most people aren’t buying directly through their smart speakers, but are using them in the earlier stages of the shopping process. That is, nearly half of consumers (47%) reported using their device for product research or search, 43% used them for creating shopping lists, and 32% for price comparison.

Still, it reported a quarter of smart speaker owners had at least placed a one-time order, and 21% were using for re-orders of frequently bought items. 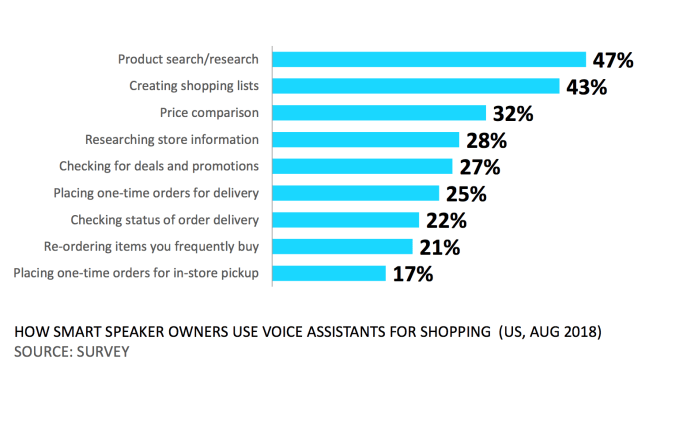 Telling Alexa to add something to a list is a fairly common use case, though that may not have been counted as a “purchase” in the numbers The Information had gotten ahold of previously. Still, it makes sense that smart speakers would be involved at the beginning of the shopping process – a reminder to buy something, so to speak – given that use of “alarms and reminders” is one of the top activities, Adobe said, with 46% usage. 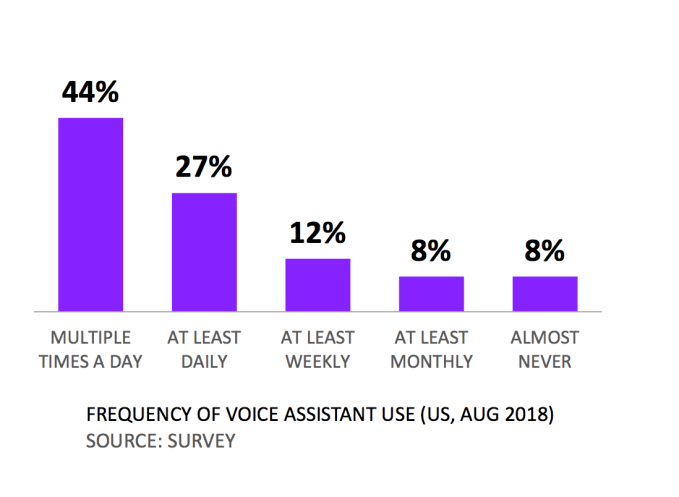 Adobe also found that use of the voice assistants on smart speakers was growing, along with the install base. It said that, overall, 76% of smart speaker owners cited an increase in usage year-over-year, with 71% saying they used their device daily, and 44% who said they used it multiple times per day. Only a small 8% said they almost never used them.