The e-commerce behemoth jumped above a trillion dollar market cap on Tuesday during intraday trading. Its share price hit an all-time high of $2,050.27 earlier this morning bringing its value above the massive, yet meaningless, milestone. The share price is bouncing around and is currently sitting a few million below the number but the share price will inevitably rest above the number soon enough. 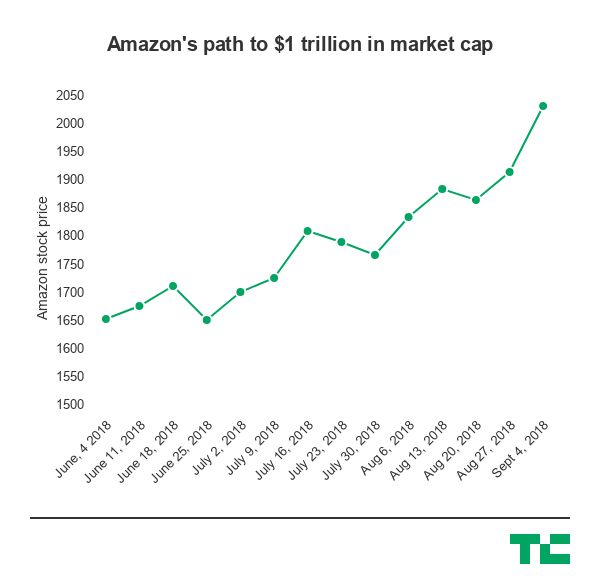 Amazon, founded in 1994 with the lofty ambitions of taking on Borders and Barnes and Noble, has completely rewritten the rules of retail in the past couple decades as it has aggressively moved to build a massive logistics engine to power all sorts of e-commerce needs for a consumer base emboldened by the shift to mobile.

This news is all the more notable because it follows Apple’s ascent to the same milestone just a few weeks ago.

The two tech behemoths may have been able to find the same value to shareholders, but while Apple has relied on its ever-evolving consumer hardware business and line of services to support its devices, Amazon has locked onto the country’s capitalistic infrastructure both in moving atoms as it ships billions of items worldwide and bits with its AWS platform.

While Apple’s market cap growth over the past year has been near a staggering 40 percent, Amazon has been even more of a value rocket ship. As of Tuesday, its market cap represented nearly 110 percent year-over-year growth.

Founder and CEO Jeff Bezos is currently estimated to be worth around $166 billion, which is about $70 billion north of Bill Gates’s worth in the #2 wealth position, so he’s doing alright I guess.