Spotify today is announcing a new way for students to access its Premium service, along with Hulu and Showtime, for a discounted price of $4.99 per month for all three. The new deal is an expansion of the existing Hulu and Spotify bundle for students, which launched around a year ago at the same price. Now those existing subscribers as well as new ones will be able to stream from all three services when they sign up.

The new bundle consists of Spotify Premium for Students, Hulu with Limited Commercials, and Showtime. Students will need to be attending a Title IV accredited institution in the U.S. to qualify for the discounted pricing.

When Spotify teamed up with Hulu back in September 2017, it was the first time it had ever partnered with a streaming video service on a bundle deal. The deal had arrived just as Spotify’s own efforts into original video were failing, and its head of video Tom Calderone was departing amid a shift in content strategy.

For both Spotify and Hulu, a bundle of music and video allows them to steel themselves against the looming threat from Apple, and its expected launch of its own streaming video service, which itself could be bundled with an Apple Music subscription. Because of Apple’s built-in advantage that comes with the iPhone, Apple Music has already outpaced Spotify in the U.S. – and clearly, the streaming services are concerned about its video plans. 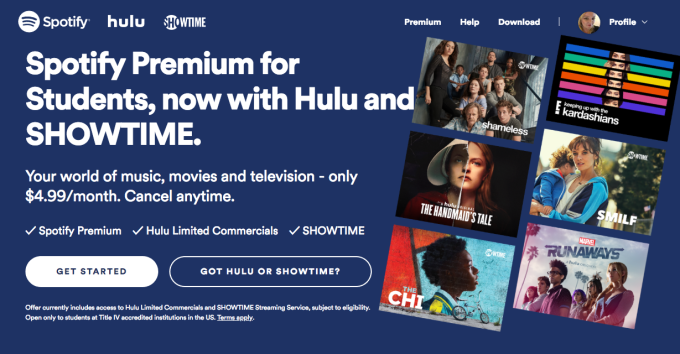 According to Spotify, the reasoning behind a bundle has to do with the fact that college students are streaming entertainment more than any other age group. It wanted to reach them with better pricing, it says.

“We’ve been really pleased about the uptake of the original Hulu bundle, so are happy to be expanding the offering,” a spokesperson told TechCrunch.

The company, however, declined to share the number of students who had taken advantage of the bundle discount so far. Spotify had also expanded this same bundle to all customers in April, at $12.99 per month for both, instead of $7.99 per month for Hulu and $9.99 per month for Spotify, when sold separately.

With the addition of Showtime, students will be able to watch series like “Shameless,” “Who Is America?,” “The Chi,” “Billions,” “Ray Donovan,” “Smilf,” “The Affair,” Homeland,” “Twin Peaks,” the upcoming Jim Carrey comedy “Kidding,” and upcoming “Escape at Dannemora,” among others, plus movies, documentaries, sports and comedy specials.

Showtime currently costs $10.99 per month over-the-top, when purchased directly from the network itself, though it’s possible to find it for less elsewhere. For example, Amazon Channels sells the subscription a la carte for $8.99 per month, at present.

To get all three services for $4.99 per month is an almost ridiculous price at this point, and one that’s intended to serve as a way to addict students at a time when their media consumption is heavy, so they’ll become avid users.

Once students have created their playlists, downloaded their songs, followed their favorite bands, networks, and shows, they will benefit from the personalization these services offer. After a few years’ time, it will be difficult for the students to abandon the services when the price increases after graduation – or, at least, that’s the thinking on the streamers’ part.

To sign up for the triple-play bundle, students can go to spotify.com/us/student. During the first three months, Spotify will only be $0.99, bringing the cost down even further.