While several tech giants have found themselves in President Trump’s crosshairs since he took office, he has just unleashed what looks to be his most sustained attack on Google to date — firing off a couple of tweets at ~5.30am Washington DC time to rail against what he claims is algorithmic bias in the results the search engine serves up if someone types in “Trump News”.

No, the president did not use the four-syllable word “algorithmic”. But presumably he hadn’t even inhaled his first Coke of the day yet.

In his rage tweets, Trump makes the specific allegation that “96% of results on “Trump News” are from National Left-Wing Media”, without citing his source for the claimed datapoint. He then makes the further unsubstantiated claim that: “Google & others are suppressing voices of Conservatives and hiding information and news that is good.”

The Guardian suggests the 96% claim is a reference to an article posted at the weekend by the website PJ Media whose self-described “not-scientific” study of the top 100 Google News results for the search term “Trump” apparently suggested “a pattern of bias against right-leaning content”.

Trump ends the pair of tweets with a warning that the “situation will be addressed” — without specifying exactly what he plans to do. Which is pretty much trademark Trump Twitter policy-on-the-hoofing. Even as the wider political context around his administration, with whispers of impeachment in the air, implies that any loud public complaints by Trump about negative headlines related to himself are an attempt to distract attention from the legal hot waters now boiling around him. But whatevs.

Here are the tweets in all their rage-filled glory:

Google search results for “Trump News” shows only the viewing/reporting of Fake New Media. In other words, they have it RIGGED, for me & others, so that almost all stories & news is BAD. Fake CNN is prominent. Republican/Conservative & Fair Media is shut out. Illegal? 96% of…

….results on “Trump News” are from National Left-Wing Media, very dangerous. Google & others are suppressing voices of Conservatives and hiding information and news that is good. They are controlling what we can & cannot see. This is a very serious situation-will be addressed!

We’ve reached out to Google for comment. Update: The company has now emailed us a statement rebutting any suggestion that its search results are biased and/or manipulated to reflect any political sentiment.

A Google spokesperson told us:

When users type queries into the Google Search bar, our goal is to make sure they receive the most relevant answers in a matter of seconds. Search is not used to set a political agenda and we don’t bias our results toward any political ideology. Every year, we issue hundreds of improvements to our algorithms to ensure they surface high-quality content in response to users’ queries. We continually work to improve Google Search and we never rank search results to manipulate political sentiment.

Ironically, testing out a search for “Trump News” after Trump’s Google flaming tweets, I was served the below result, with the well-known right wing news organization Fox News bagging the very first result in the Top Stories slot, so er… 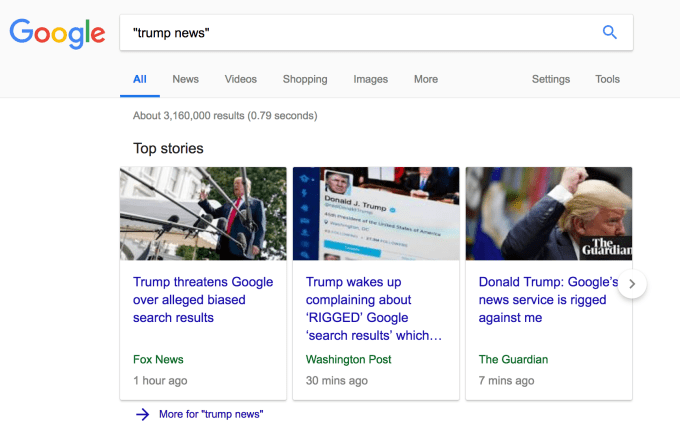 It’s unclear whether Trump is aware that Google search results can vary depending on the individual doing the searching. And, well, if Trump is seeing lots of bad news about himself (when he searches for news about himself) let’s just say we’re sure that Freud would have had a field day unpicking the knotted implications of Trump having such navel-gazing obsession with news sources he continually professes to hate and claims are “fake”. But, again, whatevs.

Of course most of what Trump is claiming here is flagrant nonsense — especially as his cancerous catchphrase of ‘fake news’ gets liberally slapped on anything he disagrees with, regardless of whether it’s true or not.

But one thing he’s saying is more or less true: Google is arguably “controlling what we can & cannot see”, given the company has a dominant share of the search market in the West (and a massively dominant one in Europe), and that most Internet users will never click beyond page one of the search results it serves. Or even browse beyond the top few results.

So, essentially, the hierarchies of information that Google’s algorithms create can and do surface or sediment information. Or, in other words, if it’s not on page one of Google it’s barely there.

Another example of Google’s power over what can and cannot be seen: In Europe, in recent years, the company now selectively de-indexes certain search results related to individuals on request (after it has reviewed a request and made a decision), in order to comply with a legal ruling by the EU’s top court (the so-called ‘right to be forgotten‘) — making it less likely that a specific data-point about a non-public individual will be broadly visible in the region.

The fact that a single company has such power over the accessibility of information (and potential to shape opinion) should concern us.

Especially as Google’s algorithmic engines are proprietary black boxes and there is no or little independent oversight of whether its information shaping is fair or even appropriate. (Again in Europe the company has been charged with promoting its own products in shopping related searches over and above rivals — and has had to make changes to the product search results it displays to comply with the antitrust ruling, though it disputes and is legally appealing the regulator’s decision.)

So Trump has at least correctly identified that Google can and does wield huge power via the popularity of its information retrieval platform.

Even as the claim he’s also selectively, self-interestedly amplifying — i.e. ‘96% biased’ — is entirely unsubstantiated, having been based on a single non-scientific survey carried out by an American conservative news blog. So judge appropriately.

Above that, the notion that any commercial company in the West, let alone one so prominent and mainstream as Google, would knowingly and systematically embed political bias into its algorithms to make them less useful for a very large swathe of its potential users is, frankly, ridiculous.

If anything, tech platforms tend to have the opposite problem; They serve up too tightly personalized stuff, risking shrinking users’ ideological horizons by feeding people a political mono-diet. (Which may help explain the Trump phenomenon itself, but I digress.)

Nonetheless, the president has continued to make tech firms his Twitter punchbags. Just last month, for example, he accused Twitter of “shadow banning” Republican users. A claim the company quickly denied, writing: “We do not shadow ban. You are always able to see the tweets from accounts you follow (although you may have to do more work to find them, like go directly to their profile). And we certainly don’t shadow ban based on political viewpoints or ideology.”

Safe to say, as the headlines about Trump get worse Trump’s rage will grow and the tweets will surely flow.

Update: The Hill is reporting that White House economic adviser Larry Kudlow, pressed by reporters about the administration’s intentions in the wake of Trump’s tweets, said it’s “taking a look” at potentially regulating Google.