If you were on the edge of your seat wondering what Facebook’s next major consumer privacy headache would be, the wait is over! The Wall Street Journal reports that Apple has deemed Facebook-owned app Onavo in violation of its App Store policies and will be giving it the boot shortly.

In a statement to TechCrunch, an Apple spokesperson explained the reasoning behind its decision to pull the app:

We work hard to protect user privacy and data security throughout the Apple ecosystem. With the latest update to our guidelines, we made it explicitly clear that apps should not collect information about which other apps are installed on a user’s device for the purposes of analytics or advertising/marketing and must make it clear what user data will be collected and how it will be used.

In some ways, it’s a wonder that Onavo has lasted this long.

Onavo, which Facebook bought back in 2013, does two things. As far as regular consumers are concerned, Onavo comports itself like a VPN, offering to “keep you and your data safe” and “blocking potentially harmful websites and securing your personal information.” 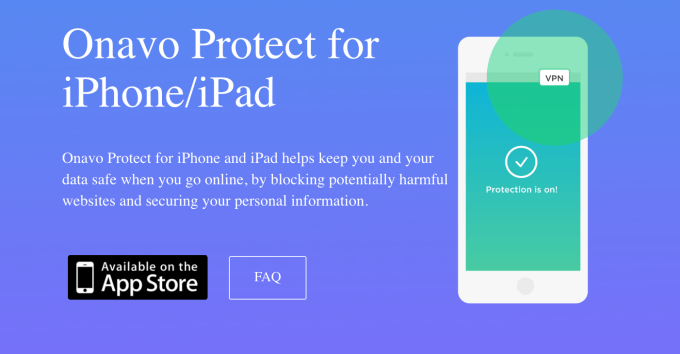 But Onavo’s real utility is pumping a ton of app usage data to its parent company, giving Facebook an invaluable bird’s-eye view into mobile trends by observing which apps are gaining traction and which are fizzling out. That perspective is useful both from a product standpoint, allowing Facebook to get ahead of the competition (Snapchat is a fine example), and giving it an edge for considering which competitors to acquire.

That dual personality is likely part of the problem for Apple. In its descriptions, Onavo leans heavily on its promise to “protect your personal information” and the cover story of a fairly legitimate looking VPN.

With no meaningful opt-in for users who want to use Onavo’s VPN services but might be hesitant about sharing data with Facebook, the app’s true intentions were buried deep in its description: “Onavo collects your mobile data traffic… Because we’re part of Facebook, we also use this info to improve Facebook products and services, gain insights into the products and services people value, and build better experiences.”

By February of this year, the Onavo app had been downloaded more than 33 million times across both iOS and Android. While the app is no longer showing up in searches within Apple’s App Store, it’s still alive and well in Google’s considerably more free-wheeling app store, so Facebook will have to lean more heavily on its Android eyes and ears for now.