China’s internet population has now grown beyond 800 million, according to the latest data from the Chinese government.

A new report [in Chinese] issued by the China Internet Network Information Center (CNNIC) put the number of people in China with access to the internet at 802 million. The agency — which is a branch of the Ministry of Industry and Information and is responsible for controlling the .cn country code — estimates that 29.68 million people in China came online for the first time in the second half of 2018.

For some context, the U.S is estimated to have around 300 million internet users. The number of internet users in China is now more than the combined populations of Japan, Russia, Mexico and the U.S., as Bloomberg noted. 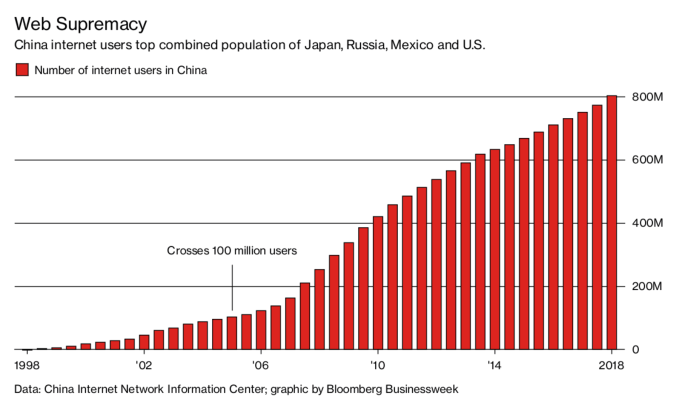 The new statistic takes internet adoption in the country to 57.7 percent, with 788 million people reportedly mobile internet users. That’s a staggering 98 percent and it underlines just how crucial mobile is in the country.

Other notable data points from the report include:

The growth of China’s internet also puts pressure on the government to maintain its policy of control over information that appears online.

It is common knowledge that Western services such as Twitter and Facebook are inaccessible in Mainland China, but the government has also cracked down on local services that include Toutiao, which is run by new media firm ByteDance, which is currently talking to investors to raise $2.5-$3.5 billion. ByteDance was ordered to shutter a parody app it operated in China while four news and content apps were suspended from the App Store and Google Play for offending authorities. ByteDance responded by doubling its content moderation team and developing stronger systems for checking content.

Apple has also been caught in the crosshairs. The company reported purged thousands of apps from the App Store in China recently. Last year it removed more than 50 VPN apps, which can be used to circumvent China’s internet censorship system, because they are deemed to be illegal in China.