ByteDance is a name that is about to become very familiar to everyone in international tech circles.

Really it should already be. It is valued at $20 billion and its flagship Toutiao news reader app is one of China’s fastest growing internet services with 120 million daily users. It is in the process of raising a $2 billion funding round and revenue for this year is reportedly forecast to hit $2.5 billion.

It may seem insane that something that huge can be a secret in many parts of the world, but in all fairness many things are big in China/Asia and nearly non-existent in other parts of the world. That won’t be the case for long. ByteDance’s notoriety went up a few notches this week after it acquired Musical.ly, the mobile app that’s hugely popular among young people in the U.S., in a deal that could reach $1 billion.

The Beijing-based company did two other deals this week which, while smaller scale, perfectly outline its ambition to grow outside of China and expand into other mobile media verticals.

It invested $50 million into Live.me, a promising mobile streaming app operated by Chinese ad player Cheetah that’s focused on the U.S. market, and agreed to fork out $86.6 million to buy up News Republic, a media aggregation service owned by Cheetah.

To sweeten the deal further, ByteDance revealed an arrangement that lets Cheetah serve up ads within its products, bolstering both companies’ businesses in the process.

France-based News Republic was acquired by Cheetah for $57 million just over a year ago, but now it becomes another brick in ByteDance’s ambitious global expansion plan. Toutiao, its top service by some margin, claims to have 120 million users in China who turn to it to get their daily fix of news in the same way that Westerns venture to social networks like Facebook and Twitter which are blocked in China.

That makes News Republic an obvious fit for ByteDance. You can expect to see it outfitted with the kind of sophisticated artificial intelligence technology that powers Toutiao today and expanded to wider international audiences. The company has honed its newsfeed and ability to tailor stories to users using AI, and it is hungry for talent to push that forward — paying up to $3 million per year for AI hires. 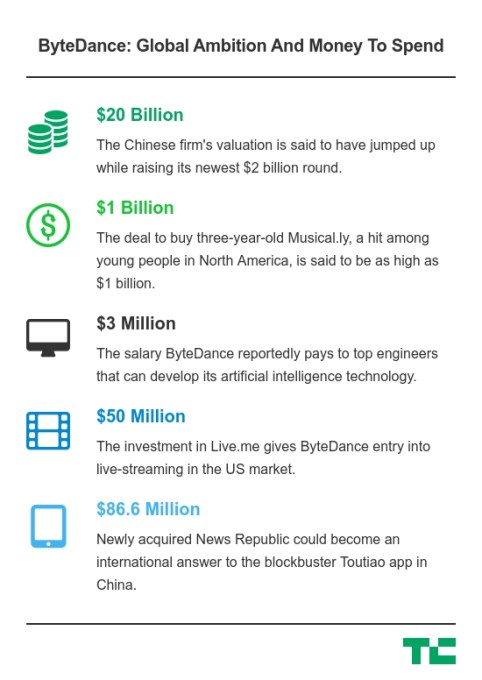 The deal is significant but it isn’t its first venture overseas. ByteDance operates an English-language app called TopBuzz and it invested in India-based Dailyhunt last year.

Outside of news aggregation, it has spent money to develop a more diversified focus on mobile entertainment apps and services. It acquired U.S. video app Flipagram earlier this year, revealed its big acquisition of Musical.ly today — which will be pushed hard in China and across Asia — and the Live.me deals adds another dimension to the media play.

There could have been another landmark deal, too, according to reports. Earlier this week, The Information wrote that ByteDance tried to buy Reddit. A deal is said to have fallen through over terms — the Chinese firm offered stock — and the lack of knowledge/understanding of its business from Reddit’s investors.

That second issue isn’t likely to be one that lingers around for ByteDance. With a solid tech behind a winning formula in China, plenty of capital at its disposal and a willingness to get the checkbook out, you can bet that few people in tech in North America will be unaware for long.