Dark Sky, one of the more popular mobile weather applications on the market, is out today with a complete refresh of its app, which has now been re-written from the ground up, the company says. The biggest change is the introduction of a new unified timeline that combines both the precipitation predictions Dark Sky is best known for, and its weather forecast all on one page. This makes it easier to view all the critical weather information in a single view, without having to tab around to different pages.

The app’s design has been updated, as well.

Combined with the map above the chart, you can get more of a sense of the day’s rainfall patterns – like if there were breaks in a storm that’s passing over, for example, or if you’re in for all-day rain.

The only qualm we have about the changes here is that the day’s high and low temps are now given less prominence – they’re in small italics above the animated chart, making them easier to miss. 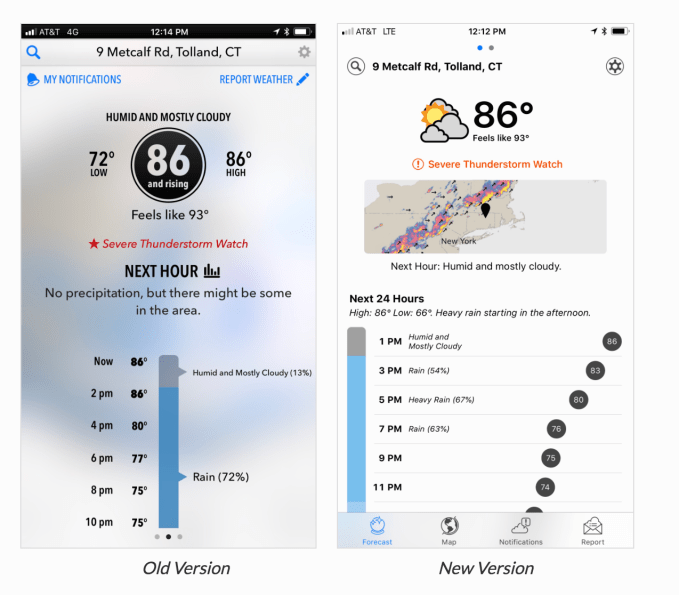 The same animated chart for rainfall can be changed to display the day’s temperature, the “feels like” temperature, and the wind (mph) in the same way by tapping on those options at the bottom.

Plus, you can see these charts for any day of the week ahead, by scrolling down to the daily forecasts and tapping on the day you want to view.

There’s also a clever, if not always practical, “Time Machine” feature here at the bottom which can show you the weather going back decades. You just put in the date you want to see and press “jump.” This may be more fun for true weather nerds, than for day-to-day use, but it’s worth noting.

Another big fix, and one that was prompted by user feedback, was Dark Sky’s lack of support for saved locations. That’s now been addressed with this new release, where you can manage locations from the Search screen. 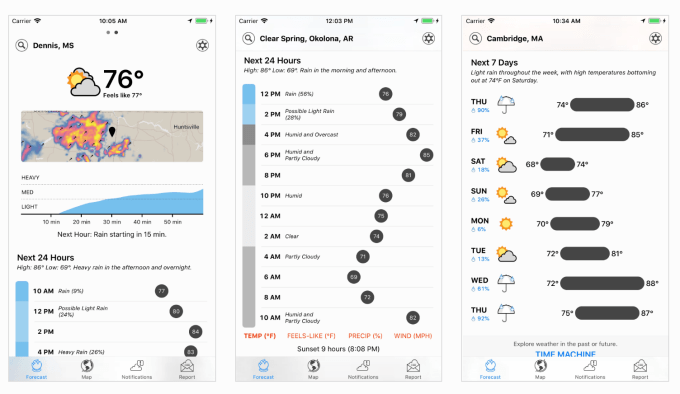 Another nod to weather nerds is available from Search, too – it will show you “interesting storms” from around the country in case “your weather happens to be too bland,” the company says, in its announcement. However, this could be useful if you’re checking in on friends or family in the path of a major storm or hurricane.

While no weather app is perfect, Dark Sky allows users to report the weather at their location which helps improve the app’s hyperlocal forecasts. That means the app may seem to be more accurate in places where there’s more consumer adoption. If you live somewhere rainy, then there’s a good chance a number of Dark Sky users are nearby because of the app’s key focus on precipitation forecasts.

The updated app offers an improved set of notifications, allowing you to toggle on or off things like Next Hour Precipitation, Daily Summary, Severe Weather Alerts, Umbrella Reminder, Sunscreen Reminder or your own custom notifications, based on other conditions that matter to you – like UV index forecasts, for instance. 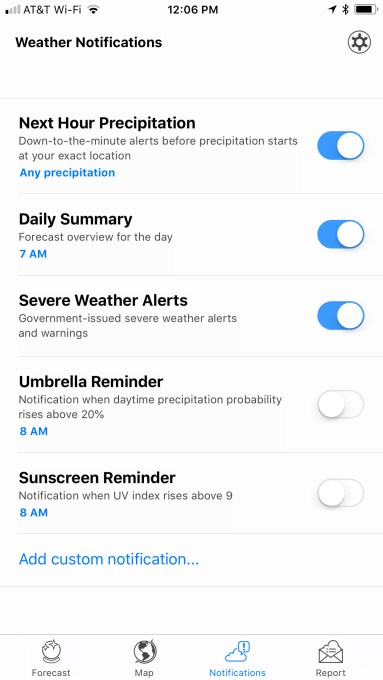 The Iconfactory designed new weather icons for the updated app, which has also been entirely rewritten to load more quickly, be more responsive and stable.

The company didn’t have to improve Dark Sky – the app was pretty good as it was, and was almost always the No. 1 paid Weather app on the App Store, as well as ranked in the Top 50 Overall. Today,  however, it’s ranked No. 1 in Weather, and has shot up to No. 4 in the Top Paid charts, as result of the update.

Current users will be able to download the update for no charge. The app is a free download on Android (with in-app purchases), and a $3.99 paid app on iOS. It’s available in the U.S., U.K, and Ireland. The company also makes money through licensing its API, which is used by organizations like Yelp, Citymapper, Microsoft, Runkeeper, DuckDuckGo, and others. As the API is updated with more functionality, those will come to the app in the form of new features, we’re told.