According to recent reports, Facebook has updated its Commerce Policy to specifically ban the sale of Kodi boxes on its site – that is, devices that come with pre-installed Kodi software, which are often used for illegally streaming digital content. However, the ban is not a new one – Facebook confirms its policy on Kodi box sales hasn’t changed since last summer, and its external Policy Page – the one being cited as evidence of the new ban – was updated in December.

It’s true that the changes have flown under the radar until now, though.

The policy change was first reported by Cord Cutters News, and later linked to by TorrentFreak and Techdirt.

The original report claims that Facebook added a new rule on its list of “Digital Media and Electronic Devices” under “Prohibited Content,” which specifically calls out Kodi boxes. It says that Facebook posts “may not promote the sale of devices that facilitate or encourage streaming digital content in an authorized manner or interfering with the functionality of electronic devices.”

The Policy page lists a few examples of what this means, including wiretapping devices, jamming or descrambling devices, jailbroken or loaded devices, and, then “promoting the sale or use of streaming devices with Kodi installed.” (The only permitted items are “add-on equipment for Kodi devices, such as keyboards and remotes.”) 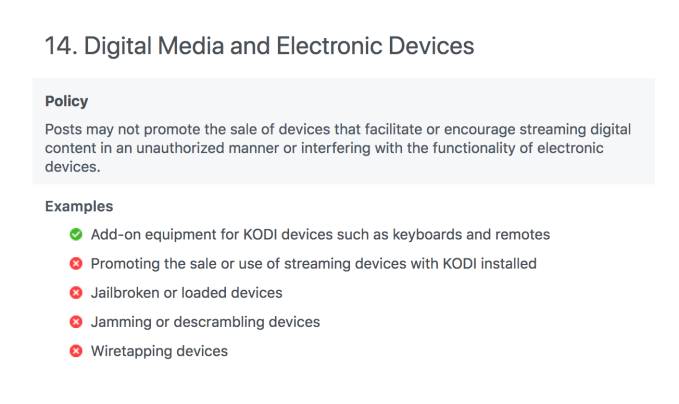 According to a Facebook spokesperson, it launched a new policy last summer that prohibited the sale of electronic devices that facilitate or are intended for unauthorized streaming or access to digital content – including Kodi boxes. This policy has not changed since last summer, but its external Policy Page – this one being cited by the various reported – was updated in December 2017 to offer additional illustrative examples and more detailed information on all its policies, including the one related to unauthorized streaming devices.

In other words, Facebook has been banning Kodi boxes since it decided to crackdown on unauthorized streaming devices last year. It’s just now being noticed.

The ban affects all posts on Marketplace, Buy and Sell Groups, and Shop Sections on Pages.

Facebook explains it takes a very strong enforcement approach when “Kodi” is mentioned with a product for sale. 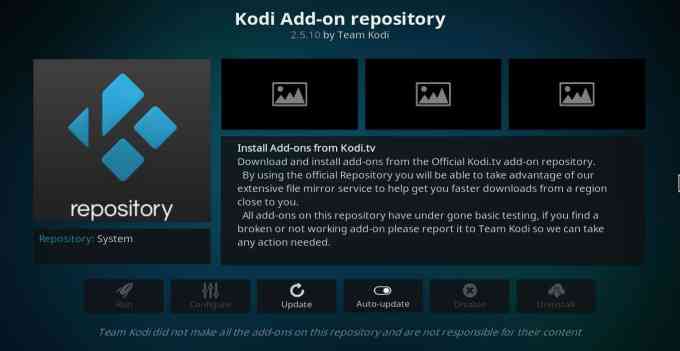 As Techdirt pointed out, that’s problematic because the Kodi software itself is actually legal.

However, device makers like Dragon Box or SetTV have been using the open-source Kodi platform and other add-ons to make copyright infringement easier for consumers.

Facebook does seem to understand that Kodi software isn’t illegal, but it knows that when “Kodi” is mentioned in a product (e.g. a device) listing, it’s very often a product designed to circumvent copyright. The company tells us that its intent is not to ban Kodi software altogether, however, and it’s in the process of reviewing its guidelines and these examples to more closely target devices that encourage unauthorized streaming.

That could mean it will, at some point, not outright ban a device that includes Kodi software, but focus more on other terms used in the sale, like “fully loaded” or some sort of description of the illegal access the box provides, perhaps. (Facebook didn’t say what might change.)

As for Kodi, the company says Facebook’s move doesn’t affect them.

“It doesn’t impact us, since we don’t sell devices,” says Keith Herrington, who handles Business Relations at the XBMC Foundation (Kodi).

He said his organization would love to talk to someone at Facebook – since they’ve never been in touch – in order to ensure that devices that are in compliance with Kodi’s trademark policy are not banned. Both Amazon and eBay have worked with Kodi on similar policies, he added.

“We’ve gotten thousands of devices which were in violation of our trademark policy removed from eBay,” Herrington said.

It’s unclear how well-enforced Facebook’s ban really is – I’m in Facebook groups myself where people talk about how to jailbreak “Fire sticks” and include posts from those who sell them pre-jailbroken. (It’s for research purposes. Ahem.)

Facebook isn’t the only company that’s attempting to crack down on these devices. Netflix, Amazon and the major studios are suing Dragon Box for facilitating piracy by making it easy for consumers to access illegal streams of movies and TV shows. 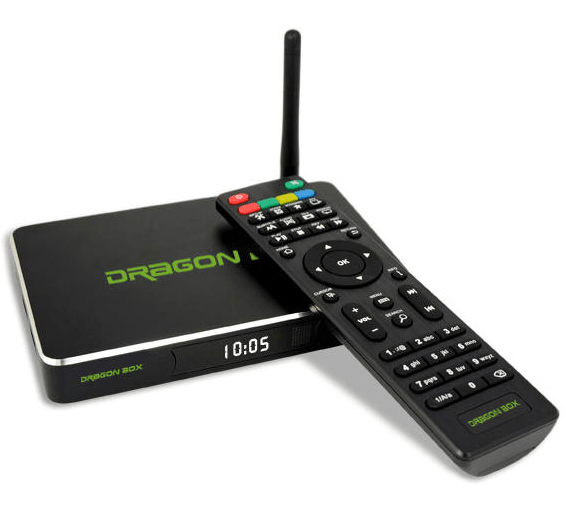 In January 2018, a U.S. District Court judge handed down a preliminary injunction against TickBox TV, a Georgia-based set-top box maker that was sued by the major studios, along with streaming services Netflix and Amazon, for profiting from the sale of “Kodi boxes.”

Google has removed the word “kodi” from the autocomplete feature of Search, along with other piracy-related terms.

And more recently, the FCC asked Amazon and eBay to stop selling fake pay TV boxes. It said these boxes often falsely bear the FCC logo to give them the appearance of legitimacy, but are actually used to  perpetuate “intellectual property theft and consumer fraud,” the FCC said in letters to Amazon CEO Jeff Bezos and eBay CEO Devin Wenig.

Why Streaming Piracy is Growing

There’s a reason Kodi devices are so popular, and it’s not just because everyone is being cheap about paying for access to content. 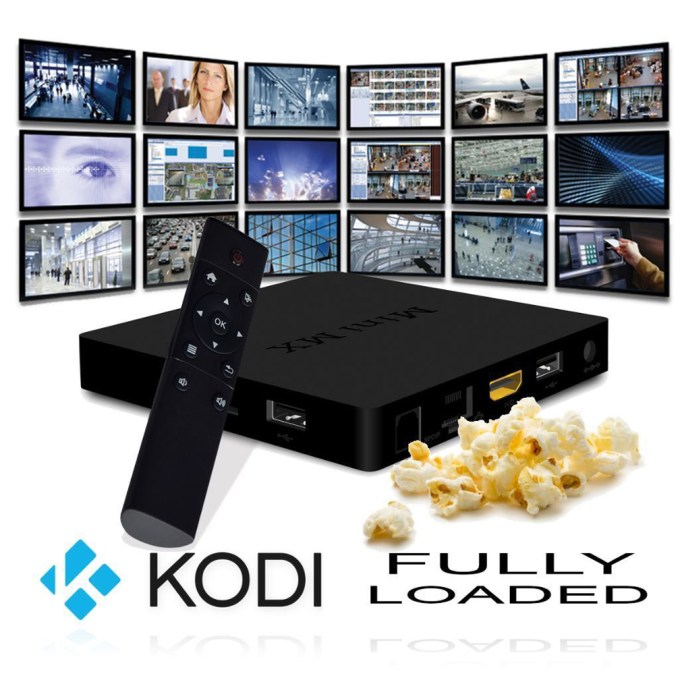 For starters, there’s a lack of consequence for consumers who do illegally stream media – it’s not like back in the day when the RIAA was suing individuals for pirating music. While there has been some activity – Comcast several years ago issued copyright infringement notices to Kodi users, for example – you can today basically get away with illegal streaming. The copyright holders are currently focused on cutting off piracy at the source – box makers and the platforms that enable their sale – not at the individual level.

The rise of cord cutting has also contributed to the issue by creating a highly fragmented streaming ecosystem. Shows that used to be available under a single (if pricey) cable or satellite TV subscription, are now spread out across services like Netflix, Amazon, Hulu, Sling TV, HBO NOW, and others used by cord cutters.

Customers are clearly willing to pay for some of these services (largely, Netflix and maybe one or two others), but most can’t afford a subscription for each one. And they definitely don’t want to when all they’re after is access to a single show from a network. That’s another reason they then turn to piracy.

Finally, there is the fact that film distributors have forever withheld their movies from streaming services for months, creating a demand for illegal downloads and streams. Though the release window has shrunk some in more recent years, the studios haven’t yet fully bought into the idea of much smaller windows to cater to the audience who will never go to the theater to watch their movie. And when this audience is cut out the market, they also turn to piracy.

Eventually, the record industry adapted to consumers’ desire for streaming, and services like Spotify and Apple Music emerged. Eventually, streaming services may be able to make piracy less attractive, too. Amazon Channels, could become a key player here if it expands to include more add-ons. Today, it’s the only true a la carte TV service available. And that perhaps – not skinny bundles – is what people really want.