When Fortnite Battle Royale launched on Android, it made an unusual choice: it bypassed Google Play in favor of offering the game directly from Epic Games’ own website. Most apps and games don’t have the luxury of making this choice – the built-in distribution Google Play offers is critical to their business. But Epic Games believes its game is popular enough and has a strong enough draw to bring players to its website for the Android download instead. In the process, it’s costing Google around $50 million this year in platform fees, according to a new report.

As of its Android launch date, Fortnite had grossed over $180 million on iOS devices, where it had been exclusively available since launching as an invite-only beta on March 15th, before later expanding to all App Store customers.

According to data from app store intelligence firm Sensor Tower, the game has earned Apple more than $54 million thanks to its 30 percent cut of all the in-app spending that takes place on apps distributed in its store.

That’s money Epic Games isn’t apparently willing to give up to Google, when there’s another way. 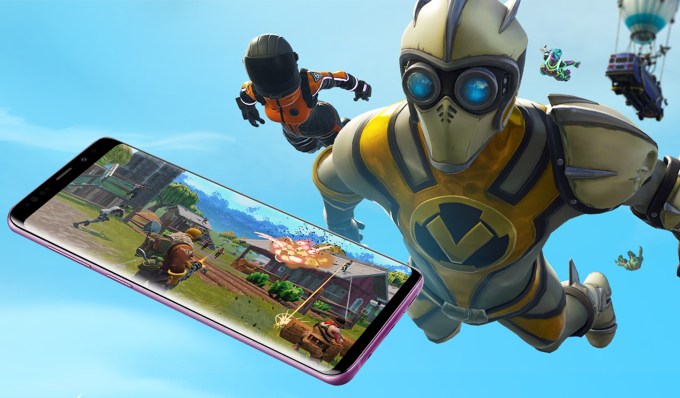 Unlike Apple, which only allows apps to be downloaded from its own storefront, Google’s platform is more open. There’s a way to adjust an Android device’s settings to download apps and games from anywhere on the web. Of course, by doing so, users are exposed to more security risks, malware infections, and other malicious attacks.

For those reasons, security researchers are saying that Epic Games’ decision sets a dangerous precedent by encouraging people to remove the default security protections from their devices. They’re also concerned that users who look for the game on Google Play could be fooled into downloading suspicious copycat apps that may be trying to take advantage of Fortnite’s absence to scam mobile users.

Google seems to be worried about that, too.

For the first time ever, the company is informing Google Play users that a game is not available for download.

Now, when users search for things like “Fortnite” or “Fortnite Battle Royale,” Google Play will respond that the app is “not available on Google Play.” (One has to wonder if Google’s misspelling of “Royale” as “Royal” in its message was a little eff u to the gamemakers, or just a bit of incompetence.)

In any event, it’s an unusual response on Google’s part – and one it can believably claim was done to serve users as well as protect them from any potential scam apps.

However, the message could lead to some pressure on Epic Games, too. It could encourage consumer complaints from those who want to more easily (or more safely) download the game, as well as from those who don’t understand there’s an alternative method or are confused about how that method works.

In addition, Google is serving up the also hugely popular PUBG Mobile at the top of Fortnite search results followed by other games. In doing so, it’s sending users to another game that can easily eat up users’ time and attention.

For Google, the move by Epic Games is likely troubling, as it could prompt other large games to do the same. While one odd move by Epic Games won’t be a make or break situation for Google Play revenue (which always lags iOS), if it became the norm, Google’s losses could climb.

At present, Google is missing out on millions that will now go directly to the game publisher itself.

Over the rest of 2018, Sensor Tower believes Fortnite will have gained at least $50 million in revenues that would otherwise have been paid out to Google.

The firm expects that when Fortnite rolls out to all supported Android devices, its launch revenue on the platform will closely resemble the first several months of Apple App Store player spending.

It may even surpass it, given the game’s popularity continues growing and the standalone download allows it to reach players in countries where Google Play isn’t available.

Meanwhile, there have been concerns that the download makes it more difficult on users with older Android devices to access the game, because the process for sideloading apps isn’t as straightforward. But Sensor Tower says this will not have a large enough impact to affect Fortnite’s revenue potential in the long run.